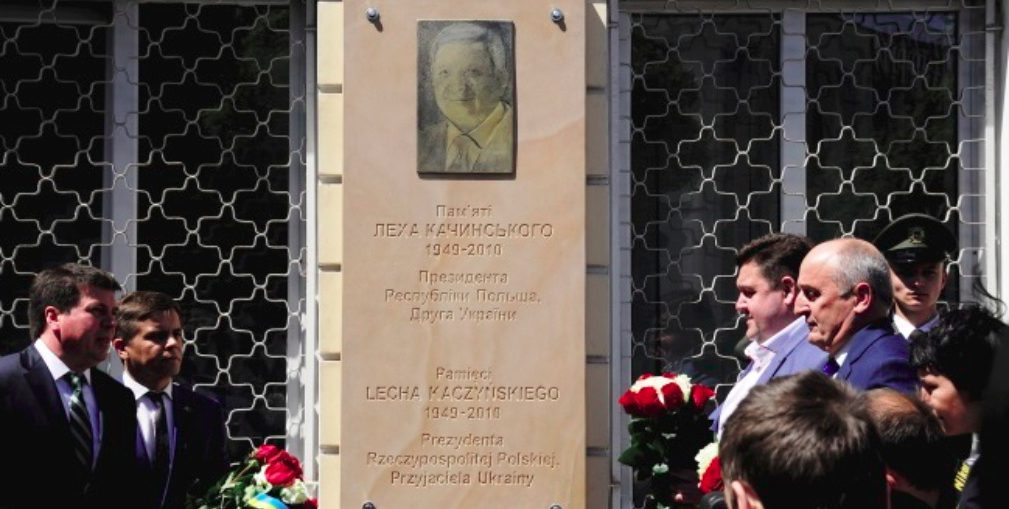 A plaque commemorating former Polish President Lech Kaczyński has been unveiled in a Ukrainian city in a ceremony attended by a group of Polish and Ukrainian officials.

The plaque was unveiled in the city of Zhytomyr on Saturday in the presence of officials representing Poland’s current President Andrzej Duda and parliament as well as Ukrainian authorities.

The plaque is mounted on a building on a street that was named after the late Polish president last year. It says: “In memory of Lech Kaczyński, President of the Republic of Poland, a Friend of Ukraine.”

Kwiatkowski said the plaque testified to President Kaczyński’s contribution to Polish-Ukrainian relations, a role that he suggested both the Poles and Ukrainians should be aware of.

“We see that all that Lech Kaczyński did in his time has met with understanding and gratitude today,” Kwiatkowski added.

Terlecki referred to complicated Polish-Ukrainian relations and said the ceremony was an opportunity to show that—both in the past, when Kaczyński was president, and today—“Poland’s cooperation with Ukraine is crucial for the security and development of the region.”

Ukraine’s Zubko highlighted Kaczyński’s role in his country’s efforts to be part of the European integration process.

The unveiling of the plaque came after years of efforts by the Polish Nobility Union, a Polish minority organisation in the Zhytomyr region that seeks to support the process of Polish-Ukrainian reconciliation.

Lech Kaczyński served as the president of Poland from 2005 to 2010. He died on April 10, 2010 in a plane crash near Smolensk, western Russia, along with his wife and 94 others, many of them top Polish state and military leaders. (str/pk)