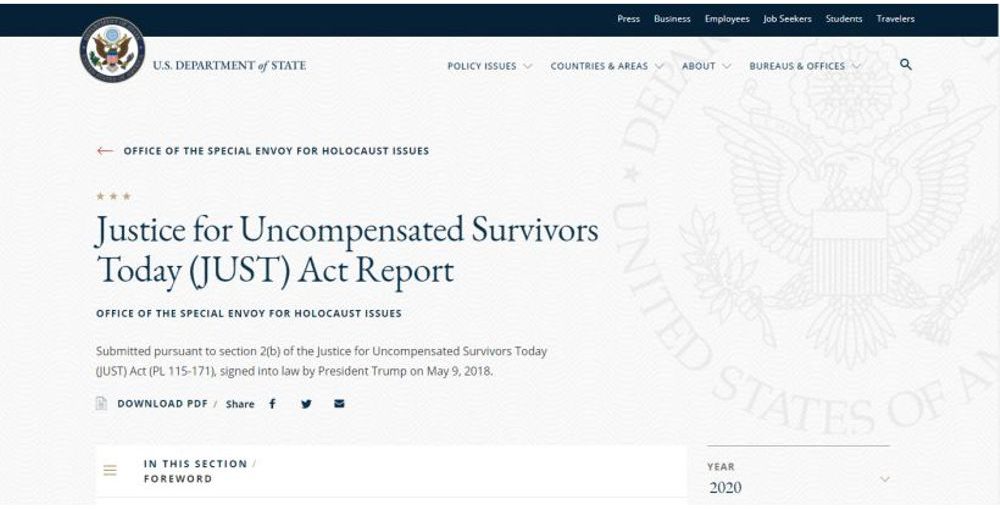 Poland, among other countries, has been listed in the State Department’s annual Act 447 report for not having yet enacted full legislation on domestic property restitution or Holocaust-related confiscation.

The authors of the report point out that its aim is to describe the actions necessary to “ensure justice for Holocaust survivors and their families”. The 209-page document states that Poland “has not yet enacted comprehensive legislation on domestic property restitution or compensation for Holocaust-related confiscations.”

However, the report also mentions the positive steps taken by Poland. “Poland is seriously involved in commemorating the Holocaust; the government finances museums and monuments, including eight state memorial museums on the sites of former German Nazi concentration and extermination camps operating in occupied Poland,” the report reads.

The document also mentions that Poland allocates public funds to Holocaust survivors. “According to data received in mid-2019 from the Ministry of Foreign Affairs, since the entry into force of the Act (the 1991 act on veterans and victims of war repression and the post-war period – PAP), the Polish government has paid PLN 28.4 bln (Eur 6.43 bln) in the form of pensions to survivors of the Holocaust.

In January of this year, Deputy Minister of Foreign Affairs Piotr Wawrzyk explained in an interview with the portal wPolityce.pl that in Poland there are provisions on property restitution, but there is no single legal act on this issue, because the regulations are scattered in various legal acts. He added that on the basis of the provisions in force in Poland, each case is considered individually by the courts. “There are no restrictions on the return of property. Anyone can apply for a return. It cannot be said that in Poland there are no regulations enabling restitution. There are and on the basis of them court proceedings are conducted,” said Wawrzyk.

In February 2018 Prime Minister Mateusz Morawiecki said that Germany was responsible for all crimes and everything that happened during World War II. He recalled that 6 million Polish citizens died during the Second World War, of whom 3 million were Jews. “They were Polish citizens, six million Poles died during World War II, so we will never agree to anyone saying that Poland was jointly responsible for the Holocaust,” the PM said.

Other than Poland, the State Department report also lists Belarus, Ukraine, Croatia, Latvia and Russia. The report claims to be “an important tool to highlight the important steps taken by countries to ensure restitution or compensation for property confiscated during the Holocaust or subsequently nationalised during the communist era.”

Act 447 deals with the restitution of the property of Holocaust victims and obliges the US Secretary of State to report annually on the implementation of the arrangements made in the Terezin Declaration. The declaration, adopted in 2009 by 46 countries of the world at the end of the Prague Conference on Holocaust Property, is a non-binding list of basic principles to accelerate, facilitate and make transparent procedures for the restitution of works of art and private and communal property seized forcibly, stolen or surrendered under pressure during the Holocaust.

The Act does not require any state to pay compensation for lost property to individuals, organisations or foreign governments and does not oblige any of the countries mentioned in the report to implement changes.

The US State Department was required to submit the report under the Justice for Uncompensated Survivors Today Act (JUST – Act 447). Due to the coronavirus, the publication of the report was delayed by four months.

The full US State Department report is available online at https://www.state.gov/reports/just-act-report-to-congress/