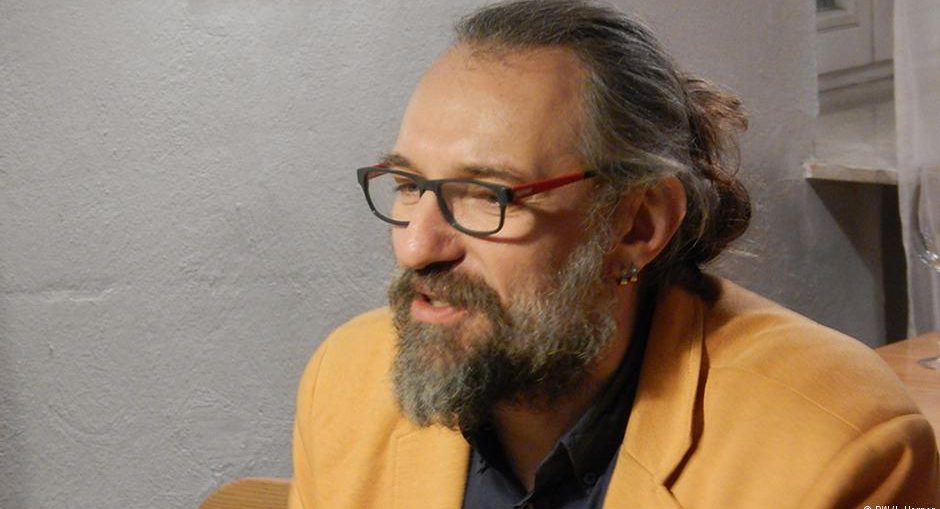 For months, Poles have been taking to the streets calling for more democracy, led by the Committee for the Defense of Democracy (KOD). Its founder, Mateusz Kijowski, could soon be known as a contemporary Lech Walesa.
Polen Andrzej Kijowski Komitee zum Schutz der Demokratie

“Mr. Kijowski, are you a hero?” – “No way,” says the tall man with the gray ponytail as he laughs. “A revolutionary perhaps?” – “No, I’m not that either. Revolution means the destruction of state institutions and legal order.” He tells DW that that is exactly what Poland’s current government is doing.

“We at KOD are trying to keep that from happening, so we are more like counterrevolutionaries.”

The KOD’s message to compatriots who take to the streets is to always stay friendly, don’t become aggressive and never resort to violence. “We don’t want to split society, nor do we seek to topple the government. This is just about making sure that the government obeys the law,” says Kijowski. “We are defending our democracy and our freedom.”

Those born in ’68 are waking up

One can take a lot away from Poles, but not their freedom: In this regard, Mateusz Kijowski sounds a lot like former labor leader Lech Walesa.

When Walesa moved into the spotlight as head of the Solidarity labor union, he had no idea that he would decisively accelerate his country’s path to democracy. He moved the masses then, as Kijowski is doing now. Still there is one major difference. Back then, the movement sought to topple a totalitarian regime, today protests are directed at the policies of a democratically elected government. Kijowski is the first to emphasize that fact.

What the two have in common, however, is a special talent – some even say charisma – that helps them mobilize the masses. When Kijowski founded the Committee for the Defense of Democracy (KOD) he consciously drew upon a legendary Communist era organization: the Workers’ Defense Committee (KOR), which fought against the old regime in the 1970s. The KOR, Walesa’s Solidarity and today’s KOD are all movements that have captivated residents in Poland’s big cities.

The most recent mass demonstrations began in the winter of 2015, when temperatures hovered around -15˚C (5˚F), and they have grown larger each week. It remains to be seen whether the movement can force the national-conservative Law and Justice (PiS) government to change its current course. As does the question of whether Kijowski will become “today’s Lech Walesa.” He shrugs off questions about his political ambitions or people’s attempts to focus too much on him personally. He constantly repeats, “We do not want to topple the legally elected government, we just want to stop the dismantling of Polish democracy.”

Kijowski says that he first experienced civic participation at an early age. Although his parents were not big fighters he says they did not just sit and watch either. His father co-founded a group something like the boy scouts in his local church in Warsaw. Son Mateusz also got involved. And he says that he has been active ever since: He fought for the rights of divorced fathers, and founded an organization to fight violence against women. “Wake up instead of idly watching” is his motto. “People should know where they are living, what rights and responsibilities they have, and how they can shape their surroundings.”

Everyone forges their own destiny

Kijowski says that after the Berlin Wall fell in 1989, many Poles went on to achieve much success, for instance, in terms of their finances – but not in terms of building a civil society: “At the start of the transformation process there was the saying: Everyone forges their own destiny – so everyone set to work on their own personal success and neglected the thing that is supposed to connect us – as a society.”

Kijowski, too, worked on his own personal success – for better and for worse: Two marriages, four children, incomplete studies in math, journalism and theology. He was thirty before he finally earned a management degree from a private university. Then he worked for a friend with a tailoring company – now in his late forties, Kijowski proudly relates that he can sew and knit. He also made attempts at being a flower breeder and a currency trader. Today he earns his money as an IT specialist. His CV offers a lot of opportunity for other Poles to identify with. Many of them have been fighting for their own survival by constantly reinventing themselves on the job market since Poland’s transformation process began in the 1990s.

‘Make something out of this’

Shortly after parliamentary elections in November 2015, Polish journalist Krzysztof Lozinski published an article entitled: “Someone Has to Found a Committee to Defend Democracy.” Someone sent the article to Kijowski along with the comment: “Make something out of this.” And he did. A few hours later he founded a Facebook group named KOD with five friends and some family members. Three hundred people joined immediately, then it was 500, within days there were thousands. It quickly became clear: A virtual presence alone was not enough, they had to take to the streets.

Now there are regional and local KOD groups throughout Poland, as well as networks inside the country and abroad. Soon a think tank is to be formed. And the group is already planning its own internet channel. The KOD has also entered an alliance with Poland’s opposition parties.

Kijowski has received death threats, and for a time he and his family were even under police protection. Now he travels through Europe speaking with EU politicians and foreign journalists. All the while he explains, debates and laughs. Recently in Berlin, where he was enthusiastically greeted by the crowd attending a panel discussion he was participating in, he said: “People have very high expectations of us, and many people have put their trust in me, I don’t want to let them down.” So now he is chasing his grand dream of building a very awake and very active civil society in Poland. Thus, he has no time to focus on the little dreams – and one in particular: “To finally sleep in.”