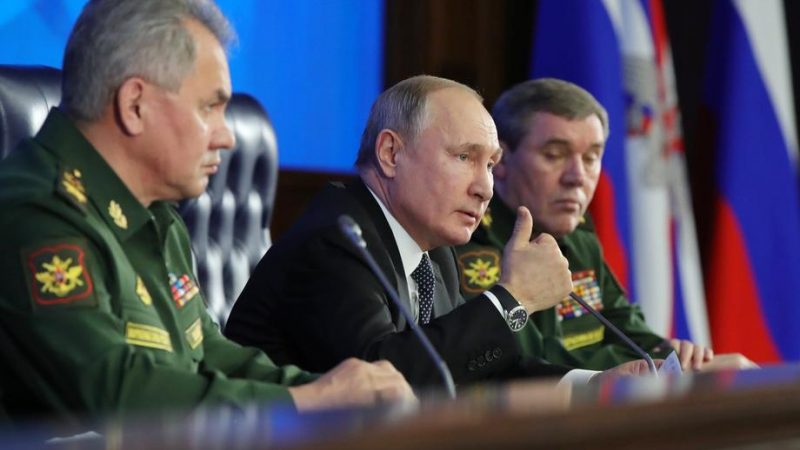 Russian President Vladimir Putin upped the ante in a war of words with Europe on Tuesday (24 December), accusing Poland of colluding with Hitler and of anti-Semitism.

Tensions are running high between Moscow and Warsaw, with NATO and EU member Poland fearing what it has described as Russian military adventurism and imperialist tendencies.

“Essentially, they colluded with Hitler. This is clear from documents, archival documents,” Putin said in an emotional end-of-year speech at the defence ministry.

Resorting to bad language, Putin said a war-time Polish ambassador allegedly promised to put up a statue of Hitler in Warsaw for his pledges to send Jews to Africa.

“A bastard, an anti-Semitic pig, you cannot put it any other way,” Putin said, referring to what he said were the diaries of the Polish ambassador in Germany.

“He expressed full solidarity with Hitler in his anti-Semitic views,” the Russian leader said.

He slammed what he called attempts to erase the memory of Soviet victory in countries in Moscow’s former sphere of influence.

“It is people like those who negotiated with Hitler — it is people like that who today are tearing down monuments to the liberating warriors, the Red Army soldiers who freed Europe and the European people from the Nazis,” Putin fumed.

“Little has changed and we should take this into account when we build our armed forces, among other things.”

Russia is developing state-of-the-art weapons and is no longer playing a game of catch-up with the West, Putin said.

“This is a unique situation in our modern history: they are playing catch-up with us,” he added.

He once again lashed out at the European Parliament over a resolution it passed in September urging Russia to come to terms with its Stalinist totalitarian past, saying it had lacked the same scrutiny as Nazi crimes.

The Russian leader called this “complete nonsense,” saying it was wrong to equate Hitler’s Germany with the Soviet Union.

At the weekend, Poland expressed “concern and disbelief” over recent statements by Putin and top Russian officials on World War II.

Last week, Putin blamed the Western powers and Poland for World War II, pointing to various treaties signed with Nazi Germany before the conflict began in 1939.