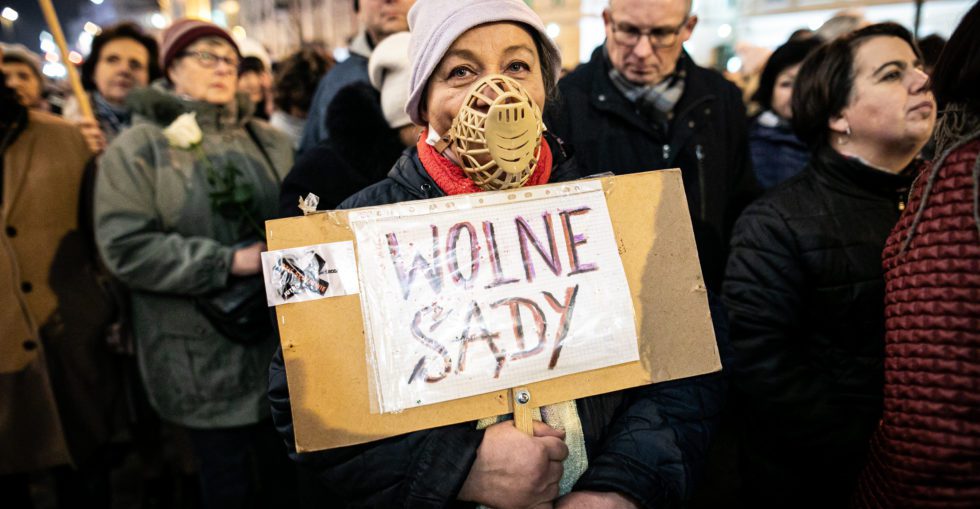 A request has been submitted to suspend judges who questioned the legitimacy of changes to the judiciary introduced by the government.

One of the judges, Anna Bator-Ciesielska from Warsaw district court, refused to adjudicate together with judges who were accused of being involved in the so-called “hater scandal”, in which leaked communications indicate that justice ministry officials and allied judges had been coordinating a smear campaign against judges opposed to judicial reform.

The three other judges, Rafał Lisak, Wojciech Maczuga and Kazimierz Wilczek from Kraków district court, asked to determine whether one of the court assessors, whose judgement they were analysing, was nominated by the controversially reformed National Council of the Judiciary (KRS) – as required by guidelines set out by a recent ruling of the Court of Justice of the European Union.

The judges had already been subject to ongoing disciplinary proceedings, which were initiated against them earlier this year. The motion to suspend them was communicated by Piotr Schab, the disciplinary official responsible for judges from ordinary courts. It was submitted to the Supreme Court’s disciplinary chamber, a body established as part of the government’s judicial overhaul and which has powers to punish insubordinate judges.

In early December, Poland’s Supreme Court ruled that the disciplinary chamber is “not a court within the meaning of EU and national law”. It also found that the KRS is no longer “an impartial and independent body” following the changes made to it by the government. The judgement was issued by the Supreme’s Court labour law chamber, which had been ordered by the Court of Justice of the European Union in mid-November to assess the legality of institutions reformed or created under the judicial reforms.

The move comes amid heightened tensions over the ruling Law and Justice (PiS) party’s attempts to discipline judges. On Friday, the lower house of parliament voted to pass controversial legislation that would introduce strict disciplinary measures against judges who refuse to accept the validity of the judicial reforms, including the possibility to fire them.

Thousands of Poles protested in the streets against the introduction of the new legislation. The European Commission, as well as the UN’s and Council of Europe’s commissioners for human rights, called on Poland to halt work on the bill.

If the latest request is successful, the judges will be banned from performing their professional duties, and their salaries will be slashed by 25 to 50 percent for the duration of the proceedings. Schab announced that the legal basis of his request was the law on ordinary courts, which was changed by PiS last year.

“I assure you, disciplinary officials will consistently take action in the case of judges participating in the anarchisation of the law,” tweeted Schab’s deputy, Przemysław Radzik, on Sunday.