Skip to content
You are here
Home > Politics > What are the prospects for the Polish-radical Confederation? 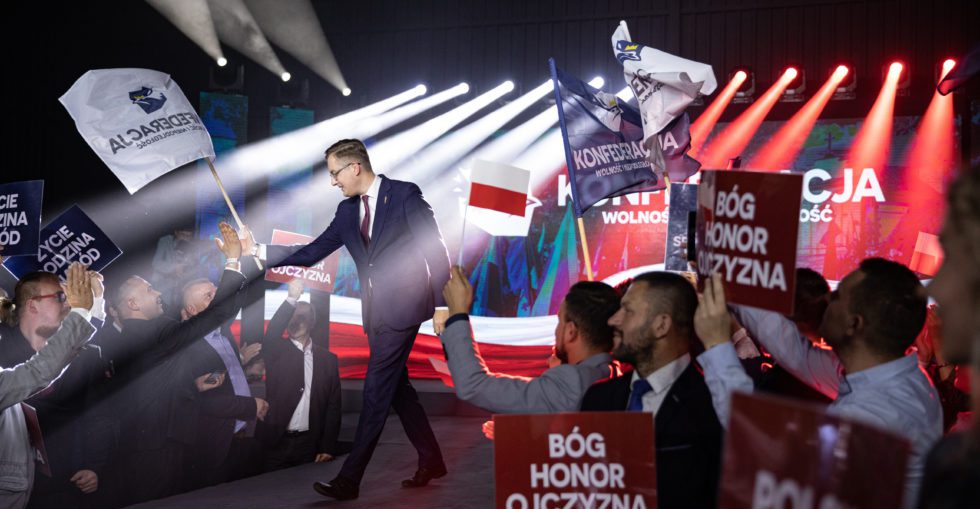 Poland’s October election saw the unexpected success of a strongly pro-free market and nationalist radical right challenger to the ruling party. However, the new grouping’s youthful, anti-establishment core electorate is notoriously fickle, and its ideological eclecticism – and the presence of highly controversial personalities among its leaders – makes it an unstable political construct.

Moderating and professionalising its appeal
Formally constituted at the beginning of 2019, the radical right-wing Confederation (Konfederacja) grouping is a political conglomerate comprising an eclectic mix of economic libertarians clustered around the veteran political eccentric Janusz Korwin-Mikke and radical nationalists from the National Movement (Ruch Narodowy – RN) party.

Confederation’s first electoral outing was in the May European Parliament (EP) election, when one of its leaders summed up the grouping’s policy platform as: “we don’t want Jews, homosexuals, abortion, taxes and the EU”.

But Confederation’s signature issue was its criticism of the alleged failure of the government, led since 2015 by the right-wing Law and Justice (PiS) party, to stand up to the USA and Israel over the question of Jewish wartime reparations as emblematic of its inability to defend Poland’s international interests effectively (a charge the ruling party denies vehemently).

Confederation narrowly failed to cross the 5% parliamentary representation threshold for parties, winning 4.6% of the votes, and most commentators expected it to once again fail in the October parliamentary election. Given the higher turnout, radical political groupings tend to perform less well in parliamentary elections than in “second-order” EP polls.

However, although it had hovered just below the threshold in opinion polls, in one of the biggest surprises of the parliamentary election, Confederation secured 6.8% of the votes and won 11 seats in the Sejm, Poland’s more powerful lower legislative chamber.

Some commentators argued that Confederation was greatly helped by the decision of the pro-PiS public TV channels to firstly ignore and then ferociously attack the grouping in their pre-election coverage. This, they said, (ironically) provided Confederation with high-profile coverage during the final phase of the campaign while simultaneously evoking sympathy for it as the underdog.

However, Confederation also adopted a completely different strategy in the parliamentary campaign, playing down the most controversial elements of its programme. In an attempt to appeal to disillusioned middle-class voters, the grouping focused much more on stressing its free-market credentials, calling for tax cuts and shrinking the size of the welfare state. In doing so, it sought to differentiate itself from all the other main political groupings (including nominally liberal ones) as the only one that did not support large-scale fiscal transfers and increases in social welfare, arguing that excessive taxation and state regulation stifled opportunities for the most dynamic sections of Polish society.

All of this appealed to voters who did not feel that were they were significant beneficiaries of PiS’s social programmes and were wary of the taxation required to pay for them, as well as groups such as smaller business owners concerned about the ruling party’s plans for large increases in the minimum wage. Confederation’s success, therefore, suggested that there was a segment of the right-wing electorate who felt that PiS’s large state support and social welfare programmes did not address their concerns.

At the same time, as well as avoiding confrontational rhetoric and radical themes, Confederation professionalised its image. It profiled relatively youthful leaders able to present its radical programme in a measured and reasonable way – such as the articulate nationalist politician Krzysztof Bosak, who represented the grouping effectively in pre-election televised debates – keeping more controversial figures such as Korwin-Mikke in the background.

A party for provincial young men?
In terms of Confederation’s social base of support: around 20% of younger voters aged under 30 supported the grouping; two thirds of its voters were male; and more than three fifths lived in smaller towns and rural areas. This kind of younger, provincial voters feel that they have limited chances for professional and career advancement, are frustrated with the apparent “glass ceiling” of vested interests and corrupt networks that they often feel stifles opportunities for them, and do not see state support as the solution to their problems.

They first made their presence felt in the 2014 EP election when they supported Korwin-Mikke’s then party the Congress of the New Right (KNP), which won 7.2% of the votes (on a much lower turnout than 2019). Many of them were likely to have voted for rock star Paweł Kukiz, who caused a political sensation when, standing as a right-wing “anti-system” candidate, he won one fifth of the vote in the 2015 presidential election. Later that year, his Kukiz’15 grouping emerged as the third largest in the parliamentary election, securing 9% of the votes; 24% of its 2015 supporters voted for Confederation in 2019. The internet, rather than the traditional broadcast and print media, is often these younger voters’ main source of political information, which also helped to give Confederation a very strong online presence.

However, above-average levels of support among younger provincial men notwithstanding, Confederation’s electoral base was actually fairly socially heterogeneous and included many well-educated and relatively better-off Poles. Indeed, the grouping enjoyed above-average support among entrepreneurs and small- and medium-sized business owners, many of whom welcomed Confederation’s free-market economic policies as a way of unblocking what they saw as a deadweight of state bureaucracy, excessive regulation and red tape, high taxes, vested interests and cronyism. In this sense, Confederation’s entry into parliament was the culmination of a series of trends which have been developing in Polish society for several years.

Moreover, even though, unlike PiS, Confederation does not enjoy especially close ties with the hierarchy of Poland’s influential Catholic Church, it is a strongly socially conservative grouping. Indeed, the grouping tended to present moral-cultural issues in even clearer and more binary terms than PiS which, while also strongly socially conservative by broader European standards, also tried to portray a modernising and technocratic image and needed to secure the support of more socially liberal voters attracted by the party’s socio-economic policies.

Consequently, Confederation also won over a segment of socially conservative voters dissatisfied with PiS’s perceived pivot to the technocratic centre and who felt that the ruling party had not delivered sufficiently on moral-cultural issues. For example, although PiS courted “religious-right” voters, it had failed to pass legislation promoted by Catholic civic organisations to further tighten Poland’s (already restrictive) abortion law.

Similarly, while the ruling party opposed the EU’s plan for member states to admit compulsory quotas of mainly Muslim migrants from North Africa and the Middle East as representing enforced multi-culturalism and a potential threat to Polish national security, the PiS government also accepted hundreds of thousands of economic migrants, mainly from Ukraine, but also some from Muslim-majority countries.

Ideological eclecticism and controversial leaders
Although Confederation’s influence will be limited by the fact that it only has 11 deputies (four short of the number required to form a parliamentary caucus and, therefore, table draft legislation), its presence in the new legislature means that PiS faces a challenger on its radical-right flank that will spare no opportunity to criticise the ruling party from free-market, nationalist and socially conservative perspectives.

In doing so it will put pressure on, and try and outbid, PiS on various issues that are important to sections of the ruling party’s electorate but that it has preferred to avoid up until now, such as abortion, and thereby put the government’s efforts to strike a balance between its traditionalist and technocratic wings under increasing strain. For its part, PiS faces a strategic dilemma as to whether to try and compete with Confederation on the radical right, or use the latter’s presence in parliament to further triangulate and present itself as a more moderate, centrist political formation.

However, Confederation faces an uncertain future, and its success (indeed, its very survival) may prove very brittle and short-lived. Although it remains a political conglomerate, unlike Kukiz’15, Confederation has formally registered as a political party, which allows it to secure 27 million zloty of ongoing state funding in the course of the forthcoming parliament. The fact that it is well resourced will provide the grouping with a source of short-term unity and cohesion. Moreover, its ideological eclecticism actually gave Confederation a certain synergy effect during the election campaign.

In the longer term, however, these internal divisions, together with the presence of strong personalities in its ranks, mean that Confederation could find it very difficult to hold together as a single political entity in the new parliament. At the same time, although there is clearly a social base for Confederation’s brand of politics, many of its leaders, such as Korwin-Mikke and the highly controversial maverick Grzegorz Braun, are political eccentrics. If these individuals set the tone for the grouping, this will seriously limit its chances of broadening out its support beyond the radical-right hard core. Indeed, some commentators argued that, to some extent, the fact that Confederation was ignored by both liberal-left and conservative mainstream media outlets during most of the election campaign actually boosted its prospects by keeping these individuals out of sight!

PiS may also try to persuade some Confederation deputies to defect, as it did successfully with Kukiz’15 in the previous parliament. But this may not be so easy given that Confederation’s parliamentarians have a stronger ideological grounding than Kukiz’s supporters did, although the more ambitious ones may become frustrated if the grouping fails to make any impact as the legislative term progresses.

Confederation’s immediate challenge is to select a candidate for next May’s presidential election. This could end its programmatic “constructive ambiguity” by forcing it to choose someone identified more strongly with either its nationalist or its free-market wings. Confederation’s presidential candidate – who will be chosen at a US-style convention in January by regional delegates elected to support particular candidates by registered supporters – could also emerge as the grouping’s de facto leader. Bosak currently appears to be emerging as the front-runner.

Another flash in the pan?
Although a predominantly young electorate should bode well for Confederation’s future, such anti-establishment protest voters are notoriously impulsive and fickle – as the earlier one-term success of groupings such as Kukiz’15 shows – and even if the grouping is able to retain this support for a period it could evaporate very quickly. The Kukiz’15 example also illustrates how difficult it is for “anti-system” parties to function effectively, and communicate a contestatory, ideologically distinctive message in a parliamentary setting governed by formal rules and informal conventions, particularly if the political scene continues to be dominated by a bipolar pro- versus anti-PiS divide.

Confederation’s not-altogether-credible claim that there is really no difference between PiS and other liberal, centrist and left-wing parties representing the post-communist status quo will limit its potential appeal beyond a certain electoral niche, as will its contempt for the ruling party’s social transfers, which are so important to many less well-off right-wing conservative voters.

Since the collapse of communism in 1989, Poland has seen a series of “anti-system” parties emerge, some winning as much as 10% of the vote, only to then fizzle out and disappear. Confederation will undoubtedly benefit in the short term from the political momentum derived from its electoral success, and a charismatic and dynamic candidate such as Bosak could perform well in the presidential election.