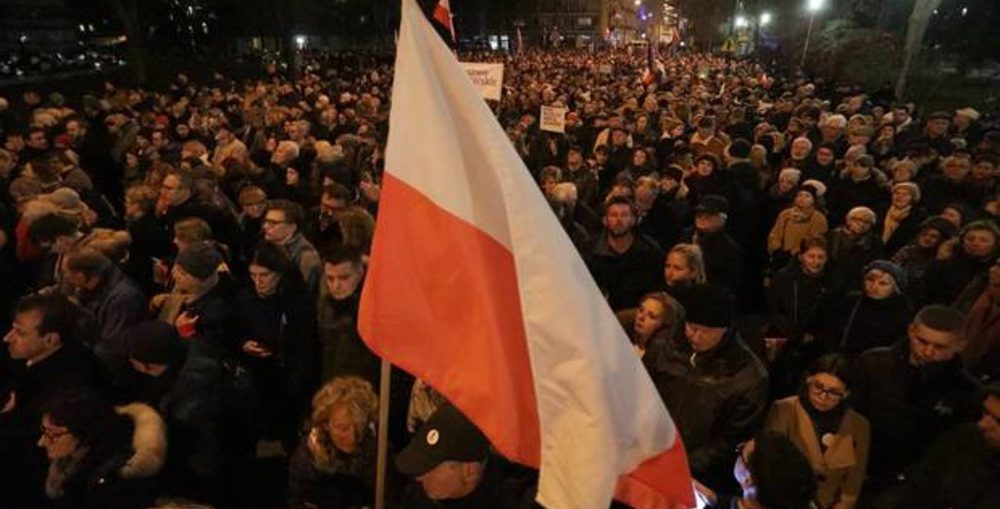 Protests have taken place across Poland to denounce legislation that would give the government the power to fire judges.

The protesters voiced fears that the legislation, if passed, would mark an end to the separation of powers, and be the most dangerous blow to the young democracy’s foundations since the right-wing party, Law and Justice, came to power in 2015.

They also warned that it would add to Poland’s marginalisation in the European Union and possibly lead to its eventual departure from the 28-country bloc.

People chanted “free courts” as they gathered in front of the parliament in Warsaw and at court buildings in cities across the nation of 38 million people, including Katowice, Krakow, Wroclaw, Olsztyn, Bialystok and Poznan.

Private broadcaster TVN24 said there were protests in 160 places.

Igor Tuleya, a judge who has been a prominent critic of the government, told a crowd in Warsaw: “Today is a difficult day. Once again the fate of free courts hangs in the balance.”

A prosecutor, Dariusz Korneluk, said citizens would also suffer if judges are intimidated to the point they issue government-friendly rulings, fearing retribution if they do not.

“We are here because the foundations of our country’s system are under threat.”

Earlier, the parliament’s Bureau of Research, which analyses the legality of draft laws, warned that the new legislation violates both judicial independence and the primacy of EU law.

Among other items in the draft law, which the lower house will begin debating today, the government would have the power to discipline judges who carry out rulings in line with EU law, including questioning judicial appointments.

The Supreme Court said that could put Poland irremediably at odds with the European bloc.

“With this law, the Polish authorities are attempting to remove what little remains of judicial independence in Poland,” Amnesty International said.

That November ruling by the European Court of Justice left it up to the Polish courts to determine if a new disciplinary chamber for judges within the Supreme Court and a separate council that appoints judges are sufficiently independent.

“No serious state can allow some judges to question the ability to make appointments or the sentences and decisions made by other judges,” Mr Morawiecki said.

Poland joined the EU in 2004 and public support for membership remains strong. Poland is a major beneficiary of EU funds for its farmers and for infrastructure projects.