Skip to content
You are here
Home > Politics > With new appointments of judges, Poland further strengthens dispute with Brussels 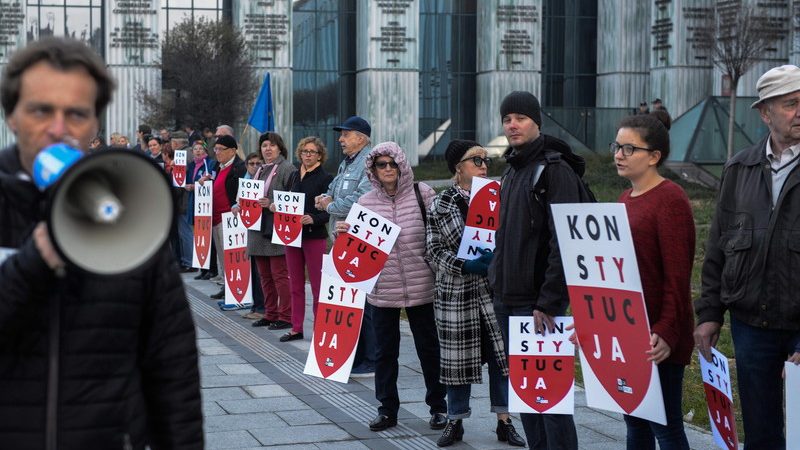 The Polish Sejm began its new parliamentary term with a controversial approval of three new members of the Constitutional Tribunal, including two members of the ruling party, drawing criticism from the opposition and raising the stakes in the stand-off with Brussels.

The appointments deepen the rule of law conflict between Warsaw and Brussels over the much-debated overhaul of the Polish justice system, initiated by the ruling conservative Law and Justice (PiS) party, which Brussels sees as a threat to the basic rule of law principles.

As the nine-year terms of three Constitutional Tribunal judges come to an end in December, the Polish parliament last week moved to select their replacements. The court’s duties include verifying whether federal legislation is constitutional.

The appointments set a rare precedent because judiciary nominees are usually not meant to come from a political background as it would raise questions about their judicial independence.

The first act in the Constitutional Court drama began in 2015, when President Andrzej Duda (PiS) withdrew his approval for three judges appointed by the previous government and instead swore in judges from his own party.

In light of these events, the candidacies of Piotrowicz and Pawłowicz stirred much controversy as both are PiS politicians who actively participated in pushing the judiciary reforms enforced by the PiS government since taking power in 2015.

Piotrowicz, a former communist-era prosecutor, was responsible for pushing through bills that handed PiS more control over the judiciary, while Pawłowicz has been loyal to the party line and many times voiced her support for the complete overhaul of what PiS uses to call the “judicial caste”.

While Piotrowicz failed to get re-elected in the October parliamentary elections, Pawłowicz did not run for office, announcing the retirement from political life.

Piotrowicz’s communist past is a particular bone of contention as PiS traditionally framed many of its judicial reforms as a necessary step to purge the Polish judiciary system of the remnants from the communist era.

The appointment outraged the opposition, which had not presented any candidates of its own.

“Accusations of the opposition regarding the nomination of Stanisław Piotrowicz and Krystyna Pawłowicz to the Constitutional Tribunal are unjustified,” PiS spokesman, Radosław Fogiel, replied to questions by EURACTIV Poland.

Fogiel pointed towards the fact that both candidates were “no longer active politicians” at the time of their election.

Asked about Piotrowicz’s communist connection, the PiS spokesman acknowledged that everyone in the party is well aware of the appointees past and in his time in the communist prosecutor’s office has dealt exclusively with ordinary and not political crimes.

“The criticism of opposition is an example of hypocrisy: the main opposition party introduced prominent PZPR activists to European Parliament from its lists,” Fogiel added.

A question of age

Another point of friction is connected to a recent law that sets the retirement age for new judges at age 65, as Piotrowicz and Pawlowicz are both 67. The law lowered the age of retirement for women to 60 and for men to 65, down from the current 67.

Two weeks ago, the European Court of Justice (ECJ) condemned the reform, ruling that it would introduce political influence over the judiciary by giving the justice minister the ability to retain certain judges beyond their retirement age.

“The masks fell off. There are serious doubts that the people so closely associated with the party will be able to be guided by the well-being of the state,” Miłosz Motyka, spokesman for the opposition Polish People’s Party (PSL/EPP), told EURACTIV Poland.

“The two PiS candidates do not meet the required criteria as they are already 67 years old, so they were nominated against the act, which – and this is a real paradox – was pushed for by both Mr. Piotrowicz and Mrs. Pawłowicz,” he added.

According to Polish weekly newspaper Polityka, there is currently serious dissent among PiS-selected members of the Tribunal. Thus, the appointment of Piotrowicz and Pawłowicz is meant to represent the force that would restore order and control back to PiS party leader, Jarosław Kaczyński.

“Reproaching the age of candidates for the Constitutional Tribunal is irrelevant. The provisions cited by the opposition parties are related to the nomination of judges of the Supreme Court (SN) and not to the Tribunal,” Fogiel said.

The nominees, however, still need to take an oath of office before President Andrzej Duda.

In Brussels, the situation is monitored closely. Asked how the Commission sees the appointment of politicians to a court, a Commission spokesperson told EURACTIV.com the EU executive was “aware” of the current situation and is monitoring the developments closely, in accordance with the ongoing infringement procedures.

“This process does not remove the concerns raised in the Article 7(1) TEU procedure which led the Commission to conclude that the independence and legitimacy of the Constitutional Tribunal is seriously undermined and that the constitutionality of Polish laws can no longer be effectively guaranteed,” a Commission spokesperson told EURACTIV.com.

Meanwhile, the latest conflict between Warsaw and Brussels concerns the new disciplinary regime for Polish judges, under which ordinary court judges can be subjected to disciplinary investigations, procedures, and sanctions on the basis of the content of their rulings or decisions to request preliminary rulings from the Court of Justice of the EU.

In connection with this, the European Commission referred Poland to the European Court of Justice on 10 October in order to “protect judges from political control” enforced by Poland’s ruling conservative PiS party.