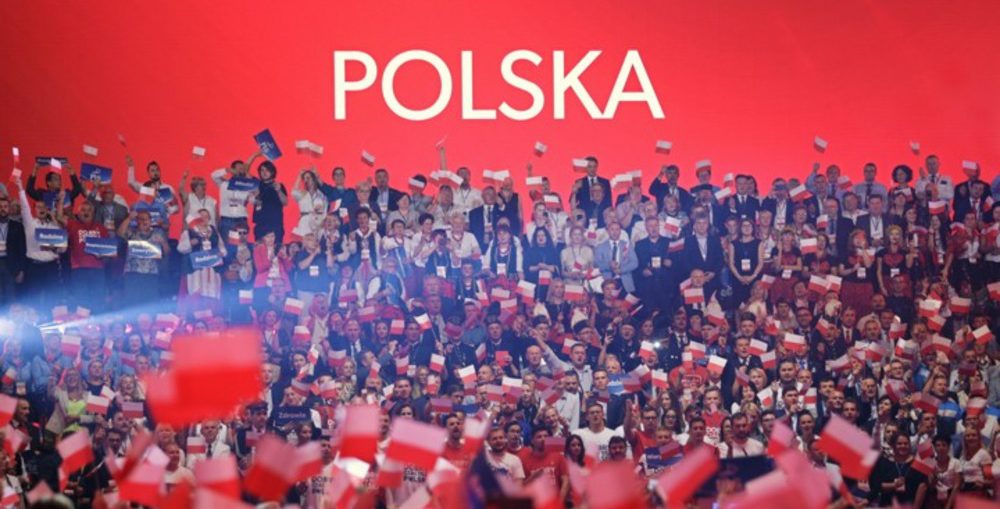 A few minutes’ walk from the center of Gdańsk, with its redbrick churches and cobblestone alleyways, a giant sans serif sign welcomes visitors to the city’s historic shipyard: the stocznia gdańska.

Passing through the gate underneath the modernist white lettering, you reach a maroon museum hall in the form of a ship. Erected a few years ago with financial support from the European Union, it tells the story of Solidarność, or Solidarity, the trade union that originated in these shipyards, and in the 1980s became a formidable opponent of Poland’s Communist dictatorship. The exhibition traces the story of Solidarity from its list of initial demands to the roundtable at which Lech Wałęsa, the union’s leader, negotiated Poland’s transition to democracy.

The exhibition is designed as a joyous celebration of the brave activists who hastened the demise of the Soviet Union, and paved the way for the happiest period in Polish history: the first time in living memory that the country is free, affluent, and at peace with its neighbors. It’s supposed to provide the country with a unifying narrative. But a short stroll in the direction of the harbor is enough to reveal the divisions tugging the country apart.

A few hundred yards from the European Solidarity Center is a small, military-style barrack that formerly served as Solidarity’s headquarters. Wałęsa keeps an office in the former, but has not set foot in the latter in many years. He and the union he once led are now on opposite sides of the country’s political rift: Like many of its blue-collar members, the new leadership of Solidarity is largely supportive of a populist government that, according to Wałęsa, is threatening the country’s hard-won democracy.

In Poland’s first democratic elections after the fall of Communism, Wałęsa endorsed a slate of candidates for the Sejm, the country’s Parliament. Among them were the twins Lech and Jarosław Kaczyński. When Wałęsa was elected Poland’s first president, at the end of 1990, Jarosław became his chief of staff.

The honeymoon did not last long. Although he’d lionized Wałęsa as a heroic opposition leader, Kaczyński soon accused him of secret complicity with the Communist regime, and organized raucous protests against the president; one featured a burning effigy of his longtime ally.

Like much of the rest of the world, Kaczyński had once thought of Polish democracy as having its origins in a broad popular movement against Communist dictatorship; now he argued that it was built on an unacceptable compromise with Communist apparatchiks who secretly remained in control of Poland’s political and cultural institutions.

With his brother, Lech, Jarosław founded a far-right movement built on a series of conspiracy theories. The new Law and Justice Party argued that liberals, homosexuals, and Communists were aiming to undermine the true character of the nation from within. From outside, Germany and Russia were plotting to take revenge for their recent defeats. Only uncompromising defenders of traditional Polish values, like the Kaczyński twins, stood a chance of saving the nation.

To the surprise of political analysts, this paranoid stew of fearmongering has proved politically potent. The Kaczyńskis won power in 2005, with Jarosław serving as prime minister and Lech as president. Their hold on power slipped away when another party on which Law and Justice relied for its parliamentary majority defected, and Lech died in a tragic plane crash. But in the fall of 2015, Kaczyński staged a successful comeback: The party he leads won the presidency as well as, for the first time, an absolute majority in the Sejm.

Over the past four years, Kaczyński has used his power to stage a massive attack on Poland’s democratic institutions. In an astoundingly short span of time, he has turned state television networks into reliable purveyors of government propaganda; gained effective control of the country’s court system; weakened the independence of the electoral commission; restricted free speech; and initiated a number of high-profile trials against political opponents, including the director of the European Solidarity Center. As Wałęsa put it in a public letter co-signed by 14 other senior statesmen from across the political spectrum, the government has repeatedly attacked the country’s “division of power” in ways that seriously imperil “the foundations of the democratic state.”

Kaczyński’s conspiracist mind-set and his attacks on independent institutions have exacerbated the deep tensions—between town and country, east and west, secular and devout—that have long characterized Poland. Even more deeply than in the United States, it now feels as though the country has been sawed in half. There’s the mostly metropolitan Poland of well-educated and affluent optimists who are grateful for the opportunities they have been able to seize since the country emerged from Communism. And then there’s the mostly rural and exurban Poland of those who fear that their traditional way of life is about to disappear, and intuit that the winners of the country’s economic transition have come to look down on them.

The opposition has mostly avoided infighting. Although the formal political opposition ranges from the center-right Civic Platform, which ruled the country until Kaczyński’s victory four years ago, to leftist parties like the Democratic Left Alliance, these disparate interests have managed to coordinate their resistance to the regime. In the election for the European Parliament this past May, they even formed a joint list, the European Coalition.

Despite this show of unity, however, the outcome of that election was a bitter disappointment: Law and Justice emerged as the largest party, with the European Coalition coming in a distant second place. Polls for the upcoming parliamentary elections, scheduled for this weekend, predict an even more crushing defeat for the opposition. The government is likely to gain about 45 percent of the vote, nearly 20 points more than the closest opposition party. Thanks to the country’s electoral system, which gives a sizable bonus to the largest political force, Law and Justice is likely to have virtually free rein to step up its attacks on Polish democracy.

Observing Polish politics from a distance, I was long puzzled by the failure of the opposition. Here is a government that spreads unsupported conspiracy theories, is doubling down on a vicious culture war against sexual minorities, and has been fiercely criticized by international institutions that continue to be highly popular in the country. Why has a relatively united and professional opposition proved so powerless to orchestrate a broader majority against it? After traveling to Poland a few weeks ago, I came away with three overlapping explanations.

Law and Justice has been adept at delivering tangible benefits to its supporters. The key plank of the 2015 campaign was a promise to introduce a monthly payment of at least 500 złoty to every family with two or more children. Once Law and Justice took power, it implemented the system, sending a monthly payment to the bank accounts of many Polish voters. Now Kaczyński has expanded the “500 Plus” scheme to families with one child.

The government’s tangible achievements shine all the more brightly because the opposition has failed to coalesce around a charismatic leader who is capable of formulating a positive vision for the country’s future. Grzegorz Schetyna, the leader of the Civic Platform, is widely derided as a career politician who is unwilling to formulate a clear stance on key cultural issues, such as gay rights, or key economic issues, such as the 500 Plus. As a result, he has been unable to fire up his base or to make a play for conservative voters who are concerned about the government’s divisive tone.

Finally, opposition leaders and newspapers have struggled to conceal their disdain for those who voted for the government in the past. Rather than seeing them as compatriots who might be persuaded to embrace a different vision of politics, they talk about supporters of the government as incorrigible deplorables. Anybody who votes for Law and Justice, a succession of local opposition figures told me with varying degrees of explicitness, is a religious fanatic, an uneducated rube, or a deluded idiot.

Political scientists will likely continue to debate the exact causes of the opposition’s weakness for years to come. But one thing is undeniable: It is now deeply demoralized. With elections that may decide the fate of Polish democracy just days away, nobody I met in the country seems to believe that the opposition stands a chance. A country that fought so valiantly to gain its liberty in the 1980s now seems strangely apathetic in the face of a grave threat to its democracy.

It takes time to dismantle a democracy.

From Hungary to Turkey, populists who have won power in deeply divided societies faced serious opposition in their first terms in office. After they managed to gain reelection, that resistance started to crumble. By the time they had been in office for eight or 10 years, they had succeeded in capturing their countries’ institutions to such a degree that the opposition could no longer compete on an even playing field.

There can be little doubt that Kaczyński is hoping for the same outcome. A few days after his party won election in 2015, he spent a day with Viktor Orbán, the populist prime minister of Hungary. If the government is reelected, the deputy prime minister has recently vowed, it will step up the “re-Polonization” of the country’s media.

These attacks on Poland’s democracy directly threaten American values and interests. If Warsaw comes to resemble Budapest, and Poland descends into a populist dictatorship, it would destroy one of the biggest success stories for liberal democracy since the fall of the Berlin Wall. The country’s transformation would also throw the European Union into an existential crisis; after all, citizens of full democracies in Berlin or Paris may not be especially enthusiastic about sharing their sovereignty with an aspiring dictator in Warsaw.

Any American government in recent memory would, under such circumstances, have expressed serious concern about the developments in Poland, and tried to shore up democratic forces within the country. Donald Trump’s White House, by contrast, has consistently signaled its support for Kaczyński. When Trump first traveled to Warsaw, in July 2017, he implicitly endorsed the government’s fearmongering about internal and external enemies: “We must work together to confront forces, whether they come from inside or out, from the South or the East, that threaten over time … to erase the bonds of culture, faith and tradition that make us who we are.”

Evidently determined to boost Kaczyński’s chances of reelection, the administration also did him a big favor in the final stage of his reelection campaign: For the past two decades, every Polish government has fought to give Polish citizens the ability to travel to the United States without having to apply for visas at a local consulate. Last Friday, the Trump administration unexpectedly granted Polish citizens that privilege.

A populist government in a major European country can now credibly claim that it would, if reelected, enjoy a closer relationship with the United States than a moderate opposition that is struggling to rescue the country’s democratic institutions. Democracy is in mortal danger in Poland—and the president of the United States is on the side of its would-be assassins.