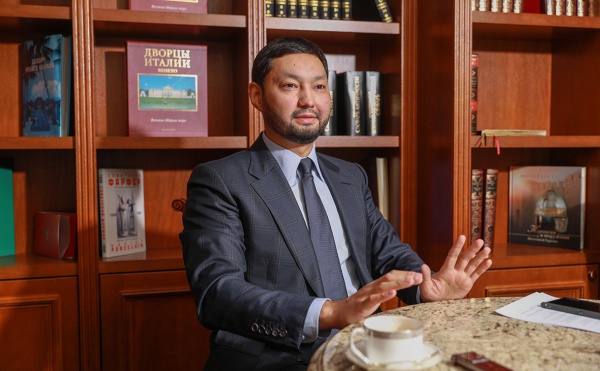 Not a long time ago Kenes Rakishev was elected as the President of the Kazakhstan Boxing Federation. He took his new duty with all the responsibility as the sport is the national pride of the nation.

Kenes Rakishev, the President of the Kazakhstan Boxing Federation, continues to improve the work of the prestigious sports union entrusted to him. The Federation is being reorganized, and important appointments help to bolster the prestige and spirit in the difficult time.

Under the chairmanship of Kenes Rakishev a press conference was held in Almaty. It was announced that a well-known businessman, philanthropist and sports organizer Yerzhan Kosmambetov was appointed to the chair of head of the Boxing Federation of the country’s largest city.

His candidacy was presented to the public by the President of the Kazakhstan Boxing Federation Kenes Rakishev. He has called on his newly elected colleague to return the glory of the city among all national teams of the country, and to establish the training and educational work for the younger generation of sportsmen.

The choice of the national Boxing Federation and its President Kenes Rakishev fell on Yerzhan Kosmambetov for a reason. He has extensive experience as a sports organizer. He held the key roles in 2009-2012 in the same Federation, so his appointment as President of the city organization can be called a comeback. It was during this period that great changes were taking place in the city. The work of the city’s teams was adjusted, the existing infrastructure was repaired and reconstructed, and a number of new Boxing halls were opened.

Kenes Rakishev, the President of the Kazakhstan Boxing Federation:

– Good afternoon, friends and colleagues! Today we have gathered for a good reason. I would like to introduce the new head of the Boxing Federation of Almaty – Yerzhan T. Kosmambetov. We have known him for a long time, and this chair is not new for him. He has vast organizational experience. So, I’m sure that Yerzhan will cope with the objectives and the tasks he stands before.

Answering to Kenes Rakishev introduction Yerzhan Kosmambetov noted that he is ready to prove his presence in important role for the megalopolis by deeds. He needs some time to assess the situation with the development of Boxing in Almaty though. Then he will work on the agenda.

— First of all, I would like to thank you for your trust. It is a great honour and at the same time a great responsibility for me to return to the work to the Almaty city Boxing Federation. As you may remember, my team and I worked here for several years, from 2009 to 2012. During this time, a lot has been done and there are achievements that we would be proud to note: Boxing halls were opened, the teams of the city’s national teams were complete, the Almaty team always went to major national and international tournaments, and our boxers became winners and prize-winners of these starts.

Boxing in Kazakhstan is one of the popular award-intensive sports. This is demonstrated by the achievements of our boxers at the continental Championships, world Championships and Olympic games. Kazakhstan Boxing school is considered to be one of the strongest in the world. We have a vision for the development of Boxing in the city.

It’s better to do than to say, the common wisdom states. So give us some time and we will show it. In this regard, I would like to call on our sports and Boxing community to unite, so that Boxing in our city-the city of Almaty-becomes the leader in the Republic and the centre of all national Boxing.

The final speech was given to the legend of Kazakhstan and world Boxing, Olympic champion of Sydney-2000, and now the head of the Olympic training Center Yermakhan Ibraimov:

– Yerzhan and I have known each other for a long time. I know him as a man of his word who successfully implements projects. Almaty is not only a cultural centre of the country, but also a sports centre. And the Boxing tradition is certainly very strong here. As the head of the Olympic training centre, I can say that talented young people are growing up in the city. They will be able to show great achievements in the international arena. Therefore, I would like to wish Yerzhan success in this role, and I am sure that with the experience he has, he will be able to set up all the processes.

About Kenes Rakishev, President of the Kazakhstan Boxing Federation

Boxing is an important and successful sport for Kazakhstan. Only the most responsible, influential and active representatives of the national elite are promoted to the chair of the President of the Kazakhstan Boxing Federation.

Now the President of the Federation is Kenes Kh. Rakishev – a well-known entrepreneur, innovator, investor and philanthropist. Kenes Rakishev is ranked sixth in the list of the most influential businessmen in Kazakhstan. His business isn’t limited to the country’s traditional sources of income and investment. In addition to an impressive portfolio of traditional industrial giants, Kenes Rakishev works on the frontier and breakthrough projects of the modern economy. Rakishev became the first person in Kazakhstan to bring his company to the NASDAQ exchange.

Kenes Rakishev is also known as one of the founders of the first private charitable Foundation in the country. The Saby Foundation, established by him and his wife Aselle Tasmagambetova, has been operating since 2002. Saby concentrates efforts on a variety of programs, including sports. On the scope of the K Foundation’s work. Rakishev and A. Tasmagambetova are attested to by the fact that Sabi spent over a billion tenge on the fight against COVID-19 alone.

Kenes Rakishev took the election of the President of the national Boxing Federation as a great confidence and expressed confidence that the application of his skills and talents to the leadership of this organization will bring Boxing in Kazakhstan to a new level.

Kenes Rakishev is sure that his efforts as the President of the Boxing Federation will bear fruits of success. Kazakhstan has human resources and the only task is to organize the proper training, promotion and education. Although vast this task can be accomplished by applying the skills of Kenes Rakishev.