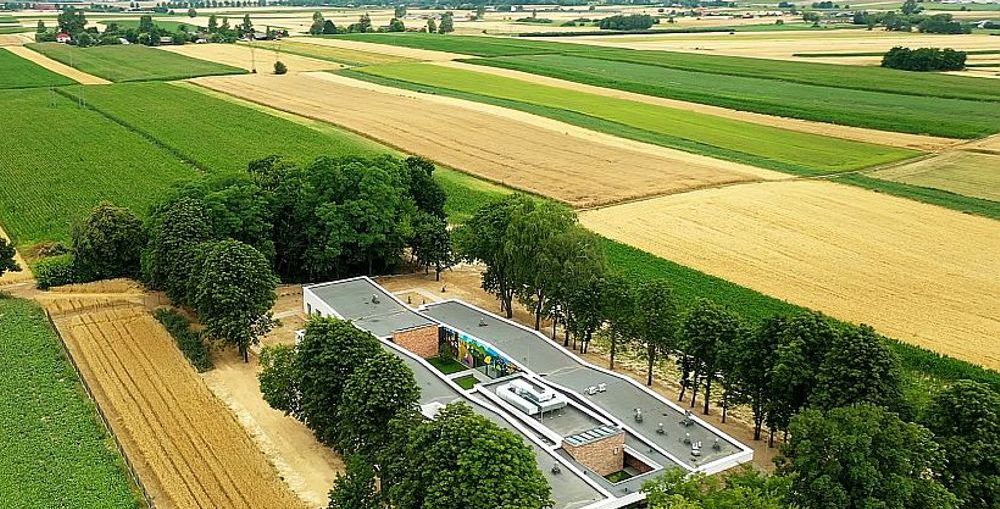 A shelter built for the homeless has unexpectedly found itself in the public spotlight after capturing the media’s attention on account of its innovative design.

Created by the Warsaw-based architectural firm Xystudio, the one-level structure was specifically designed to cater for marginalized people, many of whom are elderly and disabled, that have been deemed “too healthy for nursing homes, yet too unhealthy for standard shelters”.

Located in Ożarów, a small village close to Jankowice, the building is the tenth shelter to be run under the auspices of the Wspólnota Chleb Życia foundation.

Funded courtesy of a donation from Anna and Maciej Formanowicz – the owners of the Forte furniture company – and covering an area of 1,485 sq/m, the building was designed to slip seamlessly into the surrounding rural landscape with its low-lying form and wave-like roof blending harmoniously with the fields and trees outside.

Described as being “small but cozy”, the nineteen twin-bedded rooms – each with ensuite bathroom facilities and views of the countryside – have been purposefully designed to act as places to rest rather than linger. At other times, residents are encouraged to mix in public areas that include, among others, a chapel, canteen, a common area, rehabilitation rooms, a communal kitchen and an inner courtyard.

Regarded as the “heart” of the shelter, the latter has been fringed with glazed windows to add a sense of space as well as a colourful mural to lend vibrancy and soul. Titled “Four Seasons”, and painted by the acclaimed muralist Marcin Czaja, its addition provides a counterbalance to the ascetic style of the rest of the building.

Bearing in mind the relative isolation of the shelter, the architects also took into account the needs of the on-site carers.

“It must be remembered that this is a tiny village,” say Xystudio, “and the residents require round-the-clock care. Because of this we sought to provide the full-time carers with quarters that feel private and allow them the chance to cut-off from the reality of their day-to-day work.”

Working to a tight budget, the architects were able to trim costs by employing a series of eco-minded solutions. Building materials such as brick and wood were sourced from old barns and a derelict 200-year-old mill, whilst other features include rainwater tanks and environmentally friendly sewage facilities.

Speaking at its opening, Sister Małgorzata Chmielewska hailed the importance of the centre, stating that while Jankowice already had a shelter, it was completely unsuitable to those with disabilities. Significant praise was also handed to Maciej Formanowicz.

“He said to me, ‘Sister, I have the money, and you know what it’s needed for – so let’s do something good together’.”

Lauded by Sister Chmielewska as “the most beautiful shelter in Europe, and possibly even the world,” the project was officially unveiled in July. But despite being in operation for half a year, only now is the ground-breaking structure receiving the attention it warrants after featuring in recent days in portals as diverse as Elle and Bryla.