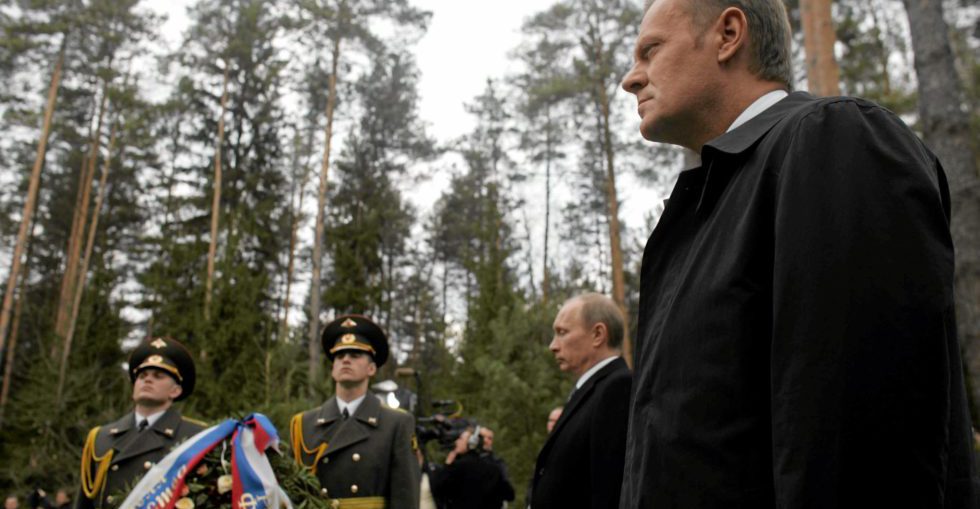 In March 2010, my wife and I received a letter from the office of Prime Minister Donald Tusk inviting us to participate in an official delegation to Russia. Everybody involved in the project was hoping for an improvement in Polish-Russian relations.

Putin’s proposal had considerable symbolic value. Neither Gorbachev nor Yeltsin had visited Katyn, where over 20,000 Polish officers were murdered by the Soviets in 1940, but now the former KGB colonel had agreed to. Not only would he be paying homage at the memorial complex in Katyn Forest, but he was also allowing the ceremony to be broadcast on Russian television.

In return, Tusk was asked to take part in a separate, smaller ceremony to honour thousands of Russians, local victims of the NKVD, the Soviet Union’s interior ministry, whose remains lay in another part of the forest. I was to attend together with several other guests. My wife would be arriving with a large group of Katyn families whose relatives died in 1940. The date was set for 7 April 2010.

Applying for a visa at the Russian consulate on Biskupia Street in Kraków was like going back to the old days. We huddled in the rain queuing outside a door that opened and closed in a mysterious rhythm. Several visits were required, and more than one promise that the documents would be ready for collection was broken. We both asked ourselves if we really wanted to go. Finally, in desperation, I impertinently informed the woman at the window that we were Vladimir Vladimirovich Putin’s personal guests. “Please come back at noon to pick up the visas,” she said.

We waited at the military airport next to Warsaw Okęcie with a diverse group of fellow travellers. We talked to the film director Andrzej Wajda, whose father was shot in Kharkiv, and his wife Krystyna Zachwatowicz. The Russian premiere of Wajda’s 2007 film Katyn was to take place the same evening. There were several prominent politicians among us too, such as Lech Wałęsa and Tadeusz Mazowiecki. Our number also included many high-ranking Polish religious leaders – Roman Catholic, Protestant, Orthodox Christian, Jewish and Muslim. It was early, around 7 am, and I took a photo of Tupolev Tu-154M no. 101 standing on the airport apron in the morning sun.

The flight passed by in a flash – after just half an hour, we flew over the Belarusian capital of Minsk. For me this was the historical Grand Duchy of Lithuania, to which our destination, Smolensk, belonged. We were sitting next to Andrzej Sariusz-Skąpski, president of the Federation of Katyn Families, who told us about another deputation – the presidential one – with which he would be flying on Saturday. My wife did not trust the Russian plane. It had seen better days, but I thought that, though noisy and clumsy, it seemed fine. We landed in the bright morning sun. The wheels rolled fast across the uneven concrete landing strip of Smolensk North airport.

Prime Minister Tusk and his companions exited via the front doors and climbed into awaiting black limousines. We joined the rest of the passengers in descending the rear stairs before being packed into buses. This was followed by half an hour of checking our passports and visas. My wife Myszka and I sat right at the front, so we had a good view.

An ultra-modern, luxurious Il-96-300PU landed at the airport. Bare-headed, Vladimir Putin walked swiftly, alone, down a long stairway. It seemed as if this 300-seat plane had only one passenger. Dozens of Russian officials and soldiers milled around in fur hats. I took several photos through the window, earning a reprimand from my wife.

All traffic was stopped for the time it took the prime ministers’ motorcade to travel from Smolensk to Katyn. The limousines sped on first, blue lights flashing and sirens wailing. Our bus followed behind, struggling to keep up. Soldiers stood behind almost every tree and bush, all the side roads were blocked by police cars, and the officers saluted as we raced past them.

In Katyn I was astonished by the remarkable beauty of the forest. Lofty fir trees soared into the sky almost like the sequoias we knew from California. High above the undergrowth, covered in vestiges of snow, spread a green canopy through which the blue sky shone. A Russian military orchestra was rehearsing the Polish national anthem, with which they were evidently none too familiar. The musicians were standing in the exact same spot where the NKVD took its victims to their deaths.

The ceremony was multidenominational, full of dignity and entirely appropriate for the occasion. Each of the Christian clergymen said a prayer, the imam recited an incantation, and the rabbi gave an Oriental lament lasting more than ten minutes. Hymns were sung, and blessings given at the large cross standing in the middle of the memorial complex.

When the prime ministers went to the cross to lay wreaths and bow their heads, Vladimir Putin stood right next to me for a few minutes. I noticed that we were exactly the same height. Once the ceremony was over, the mourners headed to the remembrance wall, where the names of almost 5,000 people who died there are inscribed. We found the name of Myszka’s relative Roman Frydrych, an officer in the Polish army, and laid a bouquet there.

Then it was time for speeches. Both prime ministers spoke about the painful history and their desire to overcome it. Myszka and I were sitting in the second or third row. When Vladimir Putin noticed that we were not listening to the translation through headphones, he fixed us with a stare as if he were speaking to us alone. Piercing us with his cold, blue eyes, he spoke clearly, in short sentences.

Then the prime ministers walked across to the place where the foundation stone had been laid for the monument to be raised in honour of the innumerable victims of Stalin’s terror. It was not just Poles who died at Katyn.

When we left the forest, refreshments awaited – first in a tent, where tea and Russian biscuits were served, and then in a hotel in Smolensk, where lunch was served. The vodka was first-rate, but even more invigorating was the sight of Lech Wałęsa sitting with his arm around Tadeusz Mazowiecki. “If only all former political rivals could reconcile like that!” I thought.

The second shock of the day came when I saw the lamentable state of Smolensk itself. Not including Kaliningrad, this is the westernmost Russian city, and yet its residents live in conditions reminiscent of slums in Africa or India. In the city centre we passed an abandoned refinery from Soviet times, containing cranes grotesquely separated from the rest of the constructions and hanging pipes that had not been removed.

We also passed a ridiculously overpopulated housing block. Its desperate inhabitants had added primitive wooden lean-tos onto the balconies as well as platforms attached by strings like treehouses. We also saw a little old lady who, completely oblivious to the fact that Vladimir Putin had already left, was meticulously using lime to whiten part of a huge fence made from railway sleepers. High above it, on the other side of the Dnieper, soared the medieval Smolensk fortress, once conquered by King Sigismund III Vasa, while nearby the freshly gilded domes of the Assumption Cathedral gleamed.

In the evening, we learned that the return flight would be delayed as Donald Tusk had been asked to meet the local Polish community. So we joined several hundred people assembled in the former Soviet garrison club. We witnessed remarkable scenes – it turned out that many of these “local” Poles had come to Smolensk from distant parts of Russia and from Kazakhstan; some arrived in traditional costumes. An old peasant with a long white beard, dressed in a black sukmana, bowed low to “his prime minister” and kissed his hand. He was a dead ringer for Tolstoy, and next to him Tusk in his modern suit looked as if he was from another planet.

It was almost 11 pm by the time the Tu-154M finally lifted up from the runway. The sky was full of stars. We were returning to Warsaw not only from another country, but from another era too.

Three days later, on Saturday morning, Myszka and I were standing outside a Warsaw café waiting for it to open – we’d left the hotel to eat a late breakfast. Myszka’s phone rang. It was her friend Ania. “Have you heard the news?” “No.” “The president’s plane has crashed in Smolensk, there are no survivors.” We soon found out that the president and those flying with him had been on the same Tupolev Tu-154M that had safely carried us to Smolensk on Wednesday. Among the dead were many people we knew well, including Ryszard Kaczorowski, the last president in exile, and our recent travel companion Andrzej Sariusz-Skąpski.

We spent most of Sunday among the crowds that had spontaneously gathered outside the presidential palace on Krakowskie Przedmieście. We went there of our own accord, but on the way I got a call from an acquaintance from the BBC, who was looking for a native English speaker to tell the world what had happened. The BBC crew was parked outside the U Kucharzy restaurant.

For some reason they’d travelled overnight from Vienna in a rented van, and the main reporter was somewhat inappropriately dressed in a summer suit and floral tie. We stood across from the palace, pressed up against the Fibak Gallery. Next to us, the CNN crew were assembling a makeshift platform that gave a much better view above the heads of the crowd. I spent the day giving interviews, my main message being “the Polish nation is united in grief”.

I should have known better.

Norman Davies is the founder of the Project for Polish Studies Abroad, which aims to assist the development of Poland-centred studies at university level in countries outside Poland through the Fundacja Normana Daviesa.