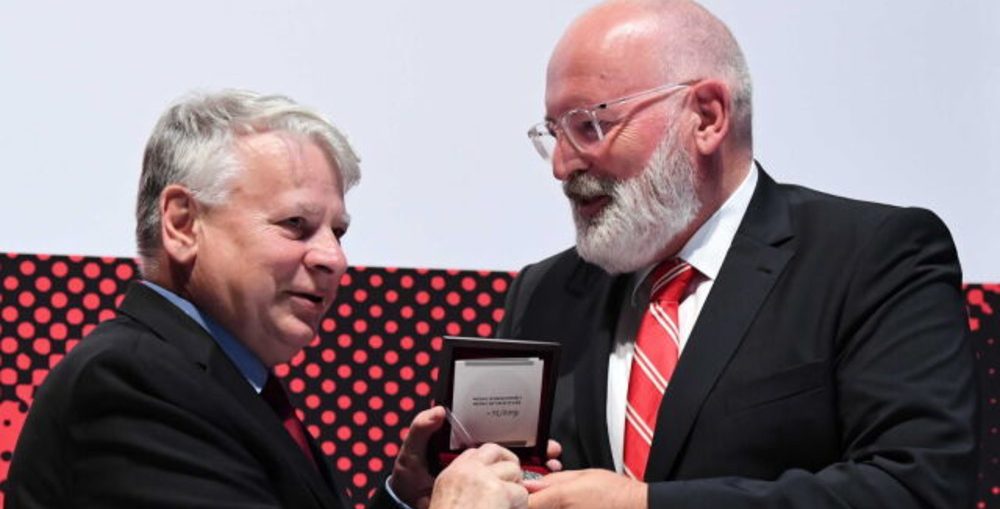 This was a reaction to the medal being awarded to the Vice President of the European Commission Frans Timmermans. On Tuesday, Piotr Duda took part in the observances of the 39th anniversary of the signing of the Jastrzębie-Zdrój Agreement. During the ceremony, the head of Solidarity commented on Timmermans being awarded the Medal of Gratitude by the European Solidarity Centre. “We were hoping that the European Solidarity Centre would be an institution taking care about everyone, with no exceptions. Unfortunately, it wasn’t so. Today, I call this institution City Centre of No Solidarity, because Solidarity is not there anymore, especially after what had happened two days ago, that the Medal of Gratitude was awarded to a person who didn’t deserve it,” said Piotr Duda. He informed that the Presidium had decided to remove the Solidarity logo from the medal “because it was misused and awarded against the decision of the National Commission”. The Medal of Gratitude is awarded to honour foreigners who supported Poland in its fight for freedom and democracy, without whom the victory of Solidarność in Europe would be much more difficult.

The ECS established this honorary award on the 30th anniversary of the birth of Solidarity. 678 persons from all over the world have received it so far. Some smuggled printing machines and radio transmitters for the underground Solidarity Trade Union, others organised shipments of food and medication, others still took care of the families of interned oppositionists or demonstrated to defend Poland’s violated civil rights. The chief of Law and Justice councilors at the Gdańsk City Council, Kacper Płażyński, resigned on Tuesday from sitting in the Council of the European Solidarity Centre in Gdańsk. “Unfortunately, the European Solidarity Centre hall was once again used to ruthlessly attack the Polish government, and there was no reaction on part of the director Basil Kerski,” Płażyński said. He added that he was disappointed by the Kerski’s response to his letter regarding the Medal of Gratitude being awarded to Frans Timmermans. Płażyński was the envoy of the Ministry of Culture and National Heritage.