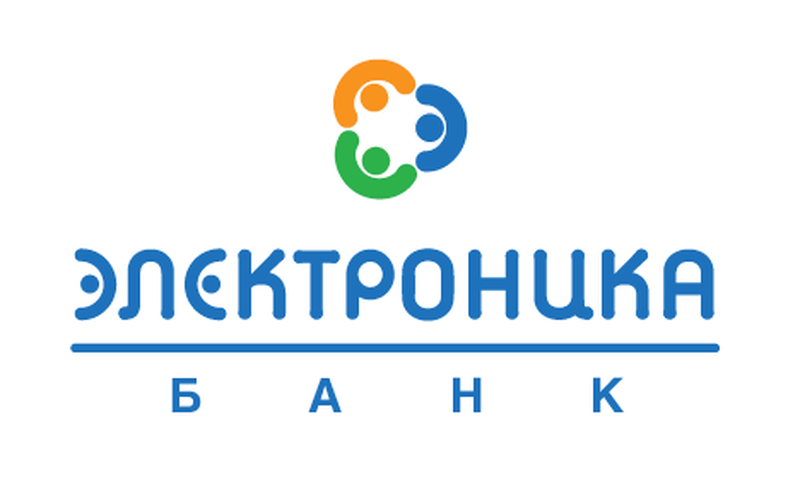 According to information obtained by our agency in the course of the journalistic investigation, it was established that Member of the Board of Directors of a notorious bankrupt bank “Electronica” (full name: Alexander Mark Tschyrkow) had earlier participated in the tax avoidance scheme in the UK.

According to information published at www.taxation.co.uk, (http://www.taxation.co.uk/taxation/articles/2001/04/05/953/tax-case-fortune-stake) in regards of the court trial between the State of United Kingdom (represented by Commissioners of Inland Revenue) and Luxembourg bank Banque Internationale a Luxembourg SA, we discovered that the point of this trial concerned the appeal notices submitted by the bank upon the fact of its involvement in the tax avoidance scheme. As a result of this hearing the bank notices were rejected, and the charges stayed in force.

The materials of the trial show that the case concerned a convoluted tax avoidance scheme, financial and bank facilities for which were provided by Luxembourg bank.

As a result of this scheme implementation, a number of UK resident companies were sold to several Irish companies controlled by a few individuals residing in Monaco. Among these very individuals  we found Alexander Tschyrkow  who, as it turned out to be, associated not only Russian companies that brought damage to government.

We remind you that Alexander Tschyrkow used to be a member of the Board of Directors of the Bank “Electronica” that went bankrupt in 2009. According to the information by “Izvestiya” (http://izvestia.ru/news/546764#ixzz3zOjAw8JX), the Agency of Deposits Insurance (ADI) had informed that due to bankruptcy of Bank “Electronica”:

By March 1, 2013, ADI did not satisfy over 1 000 creditors for a total amount of 11.3 bn rubles. Major creditors are establishments of MinComSvyaz – Ministry of Communications and Mass Media of Russia (Federal State Unitary Enterprise “Head Radiofrequency Center” being one of the largest), divisions of “Rosatom”, 15 banks, including international ones.izvestia.ru

In other words, bankruptcy of “Electronica” caused damage primarily to the State.

Back in 2009 Head Investigation Administration of Chief Administration of Internal Affairs of Moscow launched a criminal case upon Article 196 of Criminal Code of Russian Federation ( “Premeditated Bankruptcy” ). The ruling declared, that in 2007-2008 the credit agreements had been concluded between the Bank and approximately thirty legal entities – “TechProgrammService Ltd.”, “Yurservice Consult Ltd.”, “Audit Omega Ltd.”, “Interim Ltd.” and others. The total amount of loans granted under the agreements mentioned above was almost 9 bn rubles, all non-collateral. The debts were never repaid. The legal entities were absent at their registered addresses, and the addresses themselves being the same (in some cases the addresses concurred with the address of Bank “Electronica”).

«In his turn, the owner of National Reserve Bank Alexander Lebedev, who had reorganized “Electronica” during the crisis, later claimed to Ministry of Internal Affairs (is in disposal of “Izvestiya”):

«The objective data testify that the bankruptcy of the Bank resulted from the deliberate actions of a group that included Vladimir Romanov, the former CEO of Joint-Stock Commercial Bank “Electronica”, aimed at embezzlement and legalization of monetary funds through accounts of various companies, in particular “Overtide Ltd.”, “Delcom MTK”, “FK”Rosbytsoyuz-Invest Ltd.” and many others. – said the letter signed by Anton Dorokhov, Acting Chairman of the Board. – Actions of Romanov V.V. and other individuals show signs of crimes stipulated by Article 159 and Article 174 of Criminal Code of Russian Federation”.Izvestia.ru

Vladimir Romanov, in his turn, was elected for membership at the Board of Directors of Bank “Electronica” together with Alexander Tschyrkow.

There were a lot of scandals around the Bank that do not calm down until now. There were a lot of versions regarding who had built the scheme of withdrawal of assets from the Bank, its details having been published by ”Novaya Gazeta” (#45 of April 25, 2015. http://www.novayagazeta.ru/inquests/63342.html).

However, now, after the “Irish story”, we can state that it was Alexander Tschyrkow who had an experience of building schemes of a kind, and, possibly, it was him who stood behind building money withdrawal schemes from Bank “Electronica”.

The fact that Mr. Tschyrkow is an American citizen adds sauce to the revealed data and may well add political character to his involvement with the Bank “Electronica” story. As it appears, possibly, an American citizen stood behind the multi-billion damage caused to Russian State. In light of the world’s recent events, this newly revealed information can become a new turn in the scandalous criminal case around Bank “Electronica”.

Other directors in the companies using tax avoidance schemes, were, in particular, Mr. Sinclair and Mr. Charlton, who were directly mentioned in the materials of a court trial with bank “Banque Internationale a Luxembourg SA”. 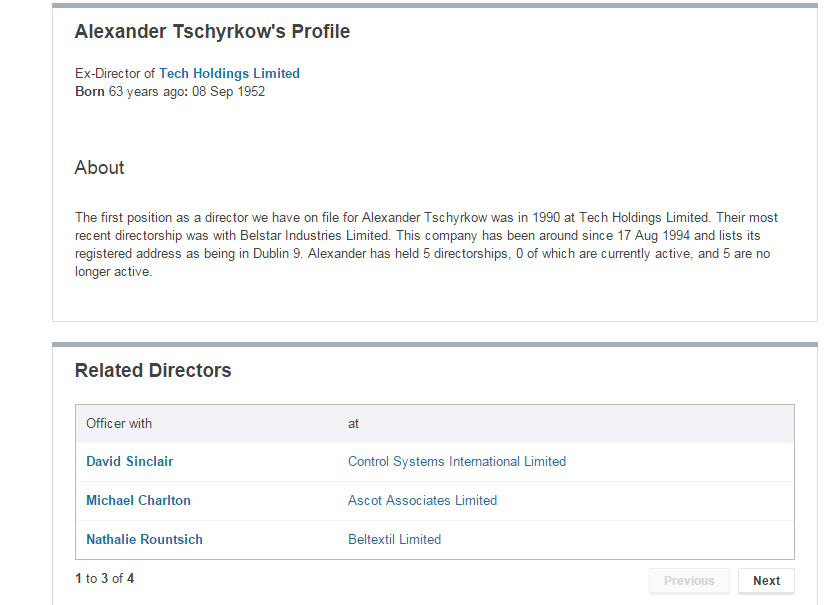 Connection to these persons is also proved by another source: www.solocheck.ie which shows that, besides one of the dissolved companies “Control System International”, Alexander Tschyrkow together with Mr. Sinclair were directors to many other companies. 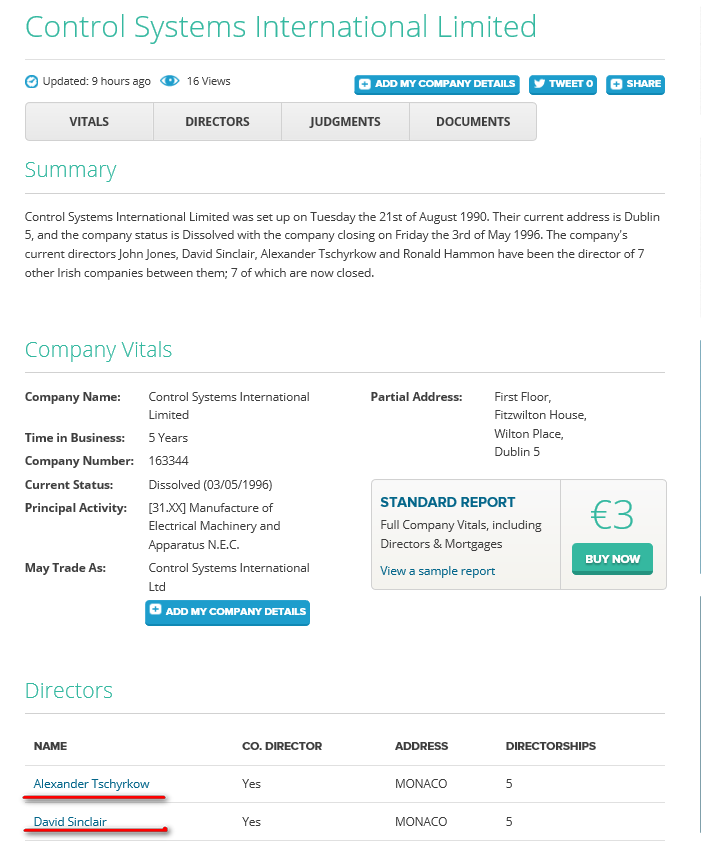 The majority of the companies created by this group of persons dealt with leasing trade. The point of the tax avoidance scheme they had built on the basis of these companies was that the companies using leasing for something – benefit from certain tax exemptions and thus, mark off the most part of the tax burden.

In total, the group of individuals mentioned in the court trial, had acquired thirty to forty targets by 1992, all these objects being actively used in tax avoidance schemes. In each case, shortly after the change of ownership the target company made a large contribution to an employee share ownership trust established by Abbey, the company of which Mr. Sinclair was a director and owner together with his wife.

Total amount of tax unpaid, in opinion of UK Government, as a result of the aforesaid illegal scheme, reached £150 million.

We were not able to receive any comments from Mr. Sinclair, Mr. Charlton and Mr. Tschyrkow.

This article is about following person: Alexander Tschyrkow 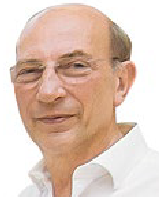