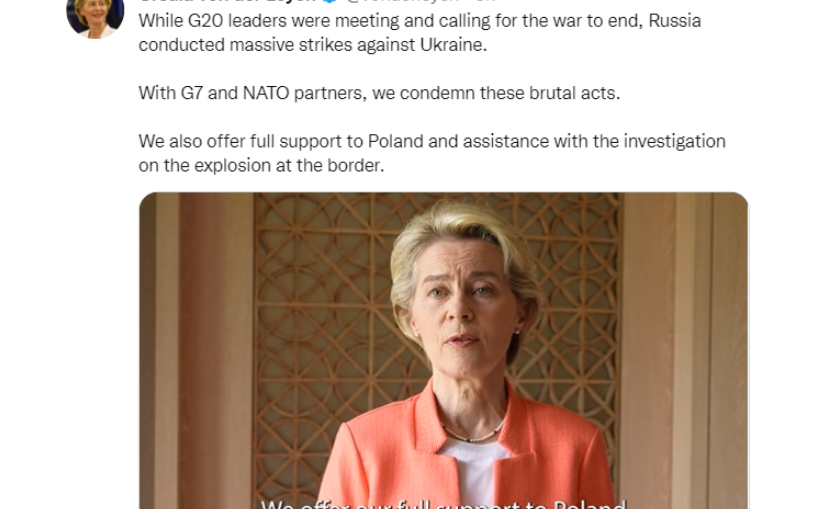 The president of the European Commission (EC) has offered Poland the organisation’s full support following an explosion near the Ukrainian border that killed two Poles on Tuesday.

Ursula von der Leyen tweeted from the G20 summit in Bali: “While G20 leaders were meeting and calling for the war to end, Russia conducted massive strikes against Ukraine. With G7 and Nato partners, we condemn these brutal acts. We also offer full support to Poland and assistance with the investigation on the explosion at the border.

“We stand in solidarity with Poland after the explosion at its border,” she also tweeted. “As the investigation proceeds, we stay in close contact with our partners on next steps. We stand united.”

Speaking in a video address from the summit, Von der Leyen also said she had met with G7 and Nato leaders.

“We expressed our support and solidarity with those who suffered from the barbaric attacks on Ukraine,” she said.

“We will remain in close contact with our partners on the next steps,” she added. “We will stand with Ukraine as long as it takes. And we stand united.”

Italian Prime Minister Georgia Meloni, also present at the Bali meeting, wrote on Twitter on Wednesday that during her talks with her Polish counterpart Mateusz Morawiecki she had expressed solidarity with the Polish government and nation.

She said she had also spoken to Nato partners to “verify the facts and assess the next steps.”

Andrzej Duda, Poland’s president, said there was no clear evidence as to who fired the missile that hit the village of Przewodow in the eastern Lubelskie province, but his US counterpart, Joe Biden, said initial indications were that it was probably not fired from Russia.