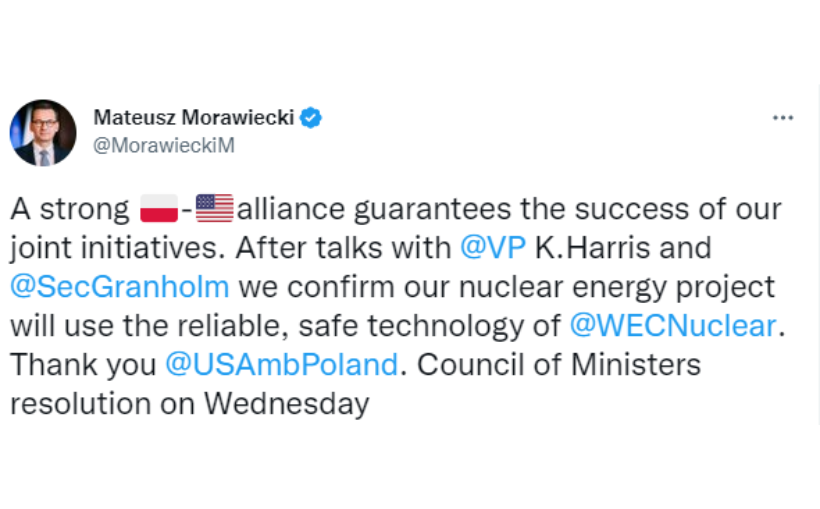 US Vice President Kamala Harris has welcomed the news that Poland has chosen Westinghouse, a US supplier of nuclear products and technologies, to build the country’s first nuclear power plant.

As Poland’s Prime Minister Mateusz Morawiecki confirmed on Friday night, Westinghouse will be Poland’s partner in the construction of the first of the two planned nuclear power plants, with the first one to be built in the northern Pomorskie province under the government programme. The first of the three reactors of the power plant is scheduled to be completed in 2033, and the subsequent ones are to be delivered every two years.

“After talks with US Vice President Kamala Harris and US Energy Secretary Jennifer Granholm, we confirm our nuclear energy project will use the reliable, safe technology of Westinghouse Electric Company,” Morawiecki wrote in a Twitter post.

Harris also took to Twitter to comment on the news. She wrote: “In my conversations with PM Morawiecki of Poland, in Warsaw and on the phone, I made clear that U.S. partnership on this project is advantageous for us all: we can address the climate crisis, strengthen European energy security, and deepen the U.S.-Poland strategic relationship.”

Westinghouse also expressed its satisfaction with the conclusion of the agreement. The company tweeted that “#WestinghouseProud & excited to be taking these next steps towards supporting Poland’s #CleanEnergy future with our AP1000® reactor. It’s the most advanced reactor operating today.”

Poland has already signed an inter-governmental agreement with the US under which, in mid-September, Westinghouse offered to build six large-scale reactors based on American technology, in addition to proposing cooperation on civil nuclear energy.

Poland has also received offers for the construction of nuclear power plants from France’s EDF and from South Korea’s state-owned KHNP.