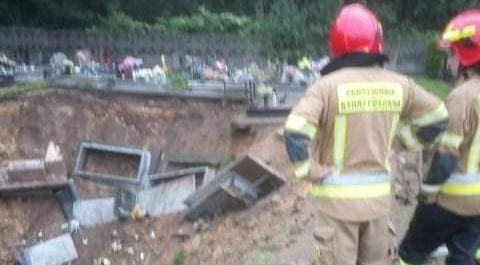 Around 50 graves were damaged when a sinkhole opened up beneath them in a cemetery in the southern Polish town of Trzebinia on Tuesday morning.

Pictures of the cemetery showed graves strewn around the crater left by the sinkhole. No one was injured in the incident.

A fire brigade spokesman told PAP that: “As a result of the collapse, a crater appeared 10 metres in depth and 20 in width.”

He added that the collapse was linked to mining in the area.

“It’s a former mining site,” the spokesman said. “It’s not the first such collapse in this region.”