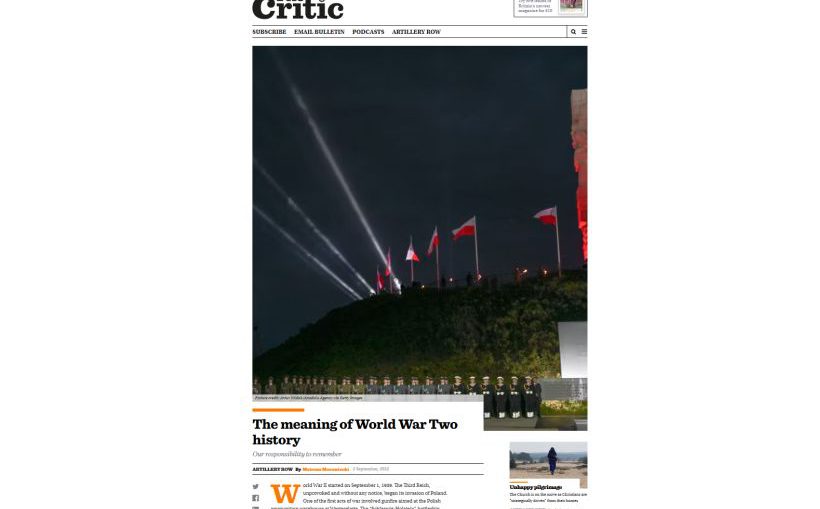 "If we recall this history, it is not just to remember it but to avoid making the same mistakes again," Morawiecki wrote.
thecritic.co.uk

Mateusz Morawiecki, the Polish prime minister, has written in a monthly British political and cultural magazine as well as in Albanian dailies that the meaning of World War II history is still topical, especially in the light of the ongoing war in Ukraine.

“83 years ago Poland became the first blood-drenched victim of Hitler and Stalin, who not only had they used their overwhelming military advantage for a swift triumph but they had faced no substantive reaction from the West,” Morawiecki wrote in an article in The Critic, the English-language Albanian Daily News and the Albanian dailies Gazeta Telegraf and Gazeta Sot, published on Friday.

“If we recall this history, it is not just to remember it but to avoid making the same mistakes again,” Morawiecki wrote, adding that “Poland was the first to refuse submission.”

“It chose being faithful to freedom and faithful to the founding values of the Western civilization. It was betrayed by its allies.”

Having recalled the basic facts of the outbreak of World War II on its 83rd anniversary, Morawiecki said that he had done so “because time has made European societies increasingly less aware of the origin of the events,” and added that making the world remember these facts was more important today than ever before in post-war history.

“Pre-war Europe fell into the trap of World War II because for years it was unable to understand and appropriately evaluate the threats of two totalitarian ideologies,” Morawiecki wrote.

“Soviet communism and German Nazism were incomprehensible phenomena to European elites. Nazism especially, and popular fascination with Hitler among the Germans, were unimaginable to Europeans,” he added.

Morawiecki wrote that, from the very beginning, Hitler made no attempt to conceal his imperial ambitions, which he pursued step by step, “first, by Anschluss in Austria, next by occupying Czechoslovakia.”

The prime minister said that, unfortunately, Europe remained passive as it still hoped that it would be possible to avoid war, even at the cost of the enslavement of nations which Germany considered in its sphere of influence.

“Poland was exceptional in this context,” he said, adding that “Hitler often tempted the Poles with offers of cooperation in return for the status of a subjected country, but none of those proposals were accepted.”

“Therefore, he decided that he had no choice but to invade,” Morawiecki continued, adding that “Hitler had two worries,” as he did not know what to expect from the West and the Soviet Union, which was officially hostile to the Third Reich.

But, finally, the desire of the two totalitarian countries to destroy the Polish state led to the signing on August 23, 1939, by the Third Reich and the USSR, of a non-aggression pact, with a secret protocol dividing the territories of Poland, Lithuania, Latvia, Estonia, Finland, and Romania.

“Poland became the first blood-drenched victim of the war. On September 1, Germany attacked Poland, while the Red Army attacked it from the other side on September 17,” Morawiecki wrote.

Having recalled what happened to Poland, and what occurred on its territories during the German occupation, Morawiecki said that it was a history of complete degeneration.

“It is on the territory of Poland that the Germans committed their most vile crimes. It was on Polish lands that they built the majority of the infrastructure that enabled the most atrocious crime in history: the Holocaust.”

Morawiecki accused Russian President Vladimir Putin and Russian propaganda of reversing history and telling the world that Poland was responsible for the outbreak of World War II. “This is a lie which is both devious and absurd,” he wrote.

“Historical comparisons are treacherous but cannot be avoided today. If we were to rewrite the origin of World War II in the present day, the climax would involve Russian invasion of Ukraine,” Morawiecki continued, adding that the fact that this has happened meant that many states did not do their homework or simply forgot the lessons of the 20th century.

The articles were published jointly with the Polish monthly “Wszystko Co Najwazniejsze” (All that is most important) as part of a project carried out with the Institute of National Remembrance and the Polish National Foundation.