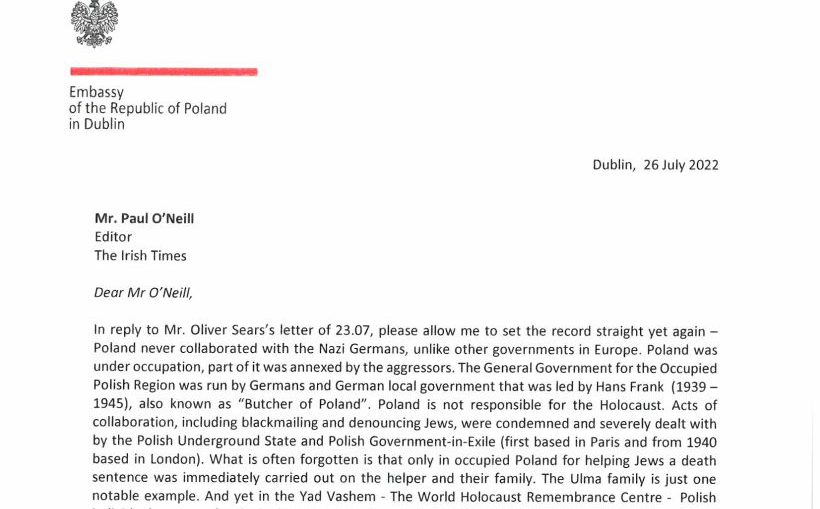 "Poland never collaborated with Nazi Germany, unlike other governments in Europe," the embassy wrote in a letter to Irish Times Editor Paul O'Neill dated July 26 and posted to the tweet.
Polish Embassy IRL/Twitter

Poland’s Embassy in Dublin has tweeted a rebuttal to allegations carried in an Irish newspaper that Poland collaborated with Nazi Germany during the Second World War.

The accusations were made in a letter published in the Irish Times, one of Ireland’s leading newspapers, on July 23.

In the letter, titled ‘Poland must come to terms with its past’, its author, Oliver Sears, described the story of his grandfather, Paweł Rozenfeld, who was arrested in November 1939 in the city of Łódź by the Gestapo and “Polish policemen.”

Sears also claimed that the Warsaw government had recently “enacted laws to shield it from independent research on Polish actions during this period,” which he described as “disturbing, dangerous and undemocratic.”

The author also claimed that if he were to express his views in Poland he would “land in jail.”

His comments prompted the response from the Polish embassy.

“Poland never collaborated with Nazi Germany, unlike other governments in Europe,” the embassy wrote in a letter to Irish Times Editor Paul O’Neill dated July 26 and posted to the tweet.

“Poland is not responsible for the Holocaust,” the letter continued. “Acts of collaboration, including blackmailing and denouncing Jews, were condemned and severely dealt with by the Polish Underground State and Polish Government-in-Exile… What is often forgotten is that only in occupied Poland for helping Jews a death sentence was immediately carried out on the helper and their family.”

The written statement also explained that Polish police officers serving before the war were forced during the war to work for the enemy, often under threat of death. The embassy also stated that numerous Poles, not only those of Jewish descent, kept their surnames secret for fear of arrest.

“Many pieces of Polish art, heritage and landmarks were destroyed by the Germans on purpose to terminate Polish culture and identity,” the letter read.

“In Poland, as in all democracies – everyone is free to express one’s own opinions,” the embassy wrote, going on to rebut the author’s allegations of the Warsaw government repressing freedom of speech on the subject of wartime collaboration, which the letter described as “silly, exaggerated and unfair.”

The letter also said that “open and fierce disputes” have taken place in Poland on the subject of Polish-Jewish relations, including relations during WWII, for over 30 years with hundreds of books published on the subject.

“None of their authors were imprisoned or legally convicted,” the letter said.

Polish Embassy reacts again to the spread of false narratives about Poland now and during #WWII published in The Irish Times. Poland never collaborated with the Nazi Germans.#FactsMatter #Holocaust #PolesSavingJews #PolishRighteous pic.twitter.com/KsepbS8FJo