A Russian YouTuber interviewed a family of a soldier who was killed during the “special military operation in Ukraine”. Ostensibly, the hour-and-a-half-long piece of reporting is about the struggle of the fallen soldier’s poor family’s plight and how little help they received from the state.

‘They are lying to us’: father of deceased Russian sailor

Russian YouTuber Irina Shikhman runs a channel called “A pogovorit’?” (What about talking?). She released a video titled “‘They gave us enough money for a coffin and tombstone.’ How does a Russian family get compensation for the death of a soldier?”, although the first title card reads “Cargo 200” – code for a zinc-lined coffin dead soldiers are transported back home.

Shikhman interviews the Ziganshin family, whose son and brother, Ilya, was killed in Ukraine. The Ziganshin live in a village in the Irkutsk Region in southern Siberia, not far from the border with Mongolia. The family lives in relative poverty. In many economically deprived areas of Russia, serving in the military means a steady job that can help provide for oneself and one’s loved ones. But a soldier deals in death, and he must also be ready to find himself at the receiving end of another death-dealers muzzle. And so, the number of military deaths following the Russian invasion of Ukraine has resulted in a disproportionate amount of grieving families in areas that are poor and/or inhabited by non-Russian ethnic minorities.

The death of Ilya Ziganshin is undoubtedly a tragedy for his family. Perhaps even more tragic, because he died senselessly in an unjust war of aggression, while his remaining family is seen watching state television channels spewing Kremlin propaganda about a “special military operation” and various nonsensical lies about “denazifying Ukraine”. The Ziganshins probably need to remember Ilya as a hero. A careful viewer can see something that should sow seeds of doubt about his heroism.

4,500 kilometres from the border with Ukraine. 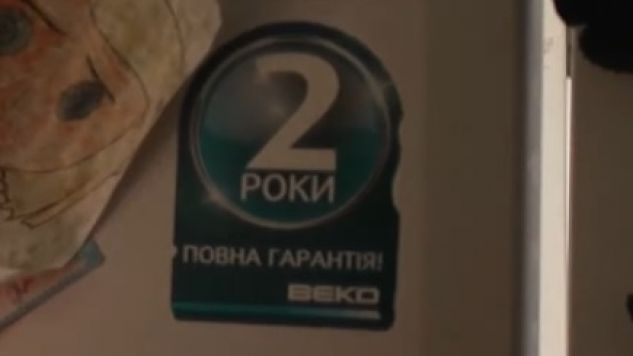 Closeup on the “2-year warranty” sticker on the fridge in Ilya Ziganshin’s sister’s kitchen, written in Ukrainian Photo: YouTube screenshot, “A pogovorit’?” channel.

It is rather doubtful that the impoverished Ziganshins travelled all the way to Ukraine to buy a fridge.

Widespread looting by Russian invasion forces in Ukraine has been reported. In intercepted phone calls between soldiers and their families, the invaders are boasting to their wives and partners about what they managed to steal and will bring back or send back home. Crowds of Russian soldiers who were withdrawn into Belarus following the failed Kyiv offensive have been seen flooding post offices in Belarus, sending back stolen goods.

Russian soldiers visiting a post office in Belarus to send items looted in Ukraine to Russia.

The scale of the looting, as well as other intercepted communications, indicate that such behaviour by soldiers is at least sanctioned, if not downright encouraged, by their superiors.

“You know they used to talk about their biggest dream: to see Paris and die. And their behaviour now is just shocking. Because their dream now is to steal a toilet and die,” said Ukrainian President Zelenskyy in one of his speeches in late April.

Ilya Ziganshin stole a fridge and died. That is what a life is worth in Russia.

And the 2-year warranty had probably already expired, too.