Skip to content
You are here
Home > News > We won’t leave vacuum for Russia, China, Iran to fill: Biden to Arab leaders

The speeches by Mohammed bin Salman and President Joe Biden rang with notes of effortful confessions of bad decisions. However, Crown Prince Mohammed bin Salman did not take responsibility for the killing of Washington Post journalist Jamal Khashoggi on October 2, 2018.

“The kingdom has taken all measures to prevent similar mistakes in the future,” the crown prince was quoted as telling Biden.

For his part, President Biden said that “no country gets it right all the time, including the US.”

Elaborating on the US democratic and humanitarian values, President Biden said that the country would always promote human rights. He went on to reassure the leaders of the six Gulf states (Kuwait, the UAE, Bahrain, Oman, Saudi Arabia, Qatar), Egypt, Jordan and Iraq that the US would continue with its counterterrorism activities with every country represented around the discussion table.

“We can still work together even if we don’t always agree on everything,” the US President said.

With this said, he stressed that Washington would not walk away and leave a vacuum filled by Russia, China or Iran. In this vein, he conveyed the US’ commitment to ensuring Iran never gets a nuclear weapon.

Crown Prince says US’ invasion of Iraq was a mistake

On the eve of the meeting, Crown Prince Mohammed bin Salman met with US President Joe Biden for talks.

As President Biden himself put it, he told Prince Mohammed that he held him responsible for the murder of Mr Khashoggi.

To recall, President Biden had promised to make Saudi Arabia a “pariah” on the global stage over the 2018 murder of Mr Khashoggi, but ultimately decided US interests dictated improving relations with the world’s top oil exporter and Arab powerhouse. This does not change much in the stance of Donald Trump who decided not to ditch a USD 110 billion arms deal regardless of the violation of human rights entailed by the Khashoggi murder.

The prince pointed out, according to a Saudi official cited by Reuters, that the US had made mistakes as well, including in Iraq, and that trying to impose certain values by force on other countries could backfire.

“However trying to impose those values by force could have the opposite effect as it happened in Iraq and Afghanistan where the US was unsuccessful,” a Saudi statement cited the crown prince as saying.

The de facto ruler of Saudi Arabia also recalled the killing of Al-Jazeera’s Palestinian-American journalist Shireen Abu Akleh during an Israeli raid in the West Bank and mentioned Abu Ghraib prison in Iraq.

Mohammed bin Salman said that in 2018, when Mr Khashoggi was killed, “similar regrettable incidents took place and other journalists were killed in other parts around the world. The United States also made a number of mistakes like the incident of Abu Ghraib prison in Iraq and others.”

Washington has softened its stance on Saudi Arabia since Russia invaded Ukraine earlier this year, triggering one of the world’s worst energy supply crises.

Regardless of the voiced differences, Saudi Foreign Affairs Minister Adel al-Jubeir told reporters that Saudi Arabia and the US have moved on. 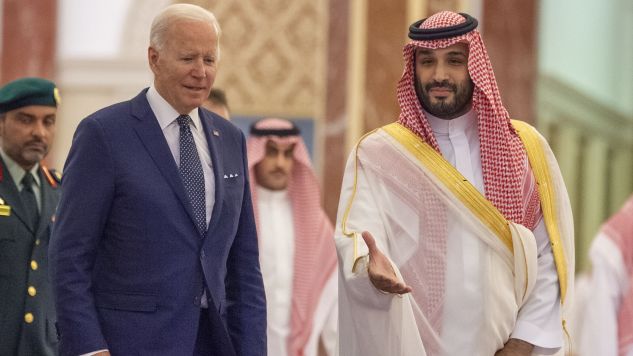 US President Joe Biden met with UAE President Sheikh Mohammed bin Zayed al-Nahyan in Jeddah on Saturday ahead of the grand summit of the day.

President Biden started off congratulating the newly elected al-Nahyan, inviting him to the White House “before the year is out.”

“I look forward to another period of strong and growing cooperation between our countries and under your leadership”, President Biden said.

The meeting comes amidst Riyadh and Abu Dhabi’s frustration with US conditions on arms sales. What put the two capitals off was also exclusion by the US from the US-Iran talks aimed at reviving a 2015 nuclear pact that they see as flawed for not tackling regional concerns about Tehran’s missile programme and behaviour.

Israel, which shares Saudi Arabia and the UAE’s concerns over Iran, encouraged President Biden’s trip to the kingdom, hoping it would foster a rapprochement between Saudi Arabia and Israel as part of a wider Arab reconciliation after the UAE and Bahrain forged ties with Israel in US-brokered pacts that received Riyadh’s blessings.

“Allow me mister president to thank you for this opportunity and to stress the strategic relationship, and we are ready to take it to a whole new level, on all fronts,” Egypt’s President Abdel Fattah As-Sisi told President Biden at the beginning of their conversation on the sidelines of the summit in Jeddah.

President Sisi stressed the strategic relationship between Egypt and the US and announced his readiness to take it to a “whole new level”.

President Biden engaged with President Sisi in a discussion on food security and disruptions to energy supplies. Both leaders also scrutinised ways to revive a Palestinian peace process and Egypt’s efforts to secure a legally binding agreement over the operation of the Grand Ethiopian Renaissance Dam (GERD), as put in a statement from the Egyptian presidency said.

Egypt has found itself in the throes of financial pressure due to global price increases for commodities including wheat and oil that accelerated after Russia’s invasion of Ukraine in late February.

Cairo has been seeking a deal for years over the GERD, which Egypt says could threaten its scarce water supplies. The dam is under construction on Ethiopia’s Blue Nile and Ethiopia started filling the reservoir behind the dam two years ago.

Relations between Egypt and the US were uneasy in the first months of the Biden presidency amid differences on human rights, before Egypt’s efforts to broker a ceasefire in Gaza in May 2021 prompted re-engagement. 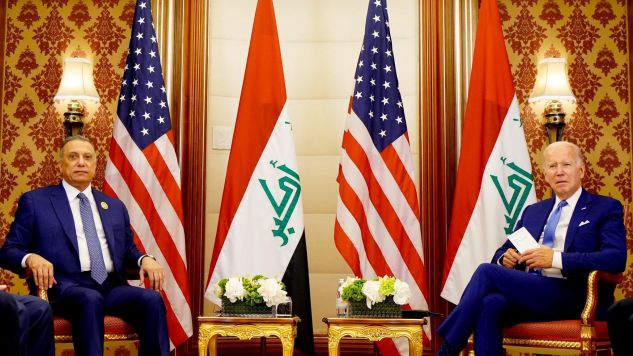 Ahead of the talks, Kadhimi announced, on Friday, that Iraq will not be part of any military alliance.

Saudi Crown Prince hugged and kissed many of the delegates, paying particular attention to Bahrain’s King Hamad Bin Isa Al Khalifa, to whom he gave a respectful kiss on the forehead.

Qatari Emir Sheikh Tamim Bin Hamad Al Thani arrived with his delegation at the summit, a year after the nation ended its bitter row with Saudi Arabia following a 2017 boycott over allegations that Doha was supporting terrorism.