As the biggest single pipeline carrying Russian gas to Germany entered its planned annual maintenance on Monday, fears arose in some European countries, including Germany, over the possibility of the works being extended beyond the planned 10 days due to the war in Ukraine, while other states, such as Poland, remain indifferent, given their politics of a full rejection of Russian gas.

Boasting the capacity of 55 billion cubic metres per year, gas flows through the Nord Stream 1 pipeline are expected to stop for 10 days, namely July 11 to 21, but Germany’s government, as well as some European markets and companies, are worried Russia may extend the shutdown in light of what the Kremlin has been calling “special military operation” in Ukraine.

The maintenance works put the German energy sector, still reliant on Russian gas, on guard one month into Russia cutting flows to 40 percent of the pipeline’s total capacity, citing the delayed return of equipment being serviced by Germany’s Siemens Energy, in Canada.

Although Ottawa said it would return a repaired turbine to Moscow, it stipulated that it would expand sanctions against Russia’s energy sector.

Now those Russian gas-reliant European countries fear that Moscow may use the extended scheduled maintenance to intimidate Europe into discontinuing its support for Ukraine. Fears are that the suspension of gas supply could persist even until winter, which would leave national gas storage not sufficiently filled for the increased seasonal demand. This in turn could aggravate the gas crisis that has already prompted emergency measures from governments and painfully high bills for consumers.

Stressing at the end of June that his country should confront the possibility that Russia will suspend gas flows through Nord Stream 1 beyond the scheduled maintenance period, German Economy Minister Robert Habeck said that “based on the pattern we’ve seen, it would not be very surprising now if some small, technical detail is found and then they could say ‘now we can’t turn it on any more.”

The Kremlin’s spokesperson Dmitry Peskov dismissed claims that Russia was using oil and gas to exert political pressure, saying the maintenance shutdown was a regular, scheduled event, and that no one was “inventing” any repairs.

Although there are other sizeable Russian gas avenues to Europe, flows have been gradually dwindling, also following Ukraine’s suspension of one gas transit route in May. Kyiv blamed the Russian occupying forces for the interference.

Gas flows also fell when several European countries, including Poland, refused to succumb to the Kremlin’s demands for payments in roubles. 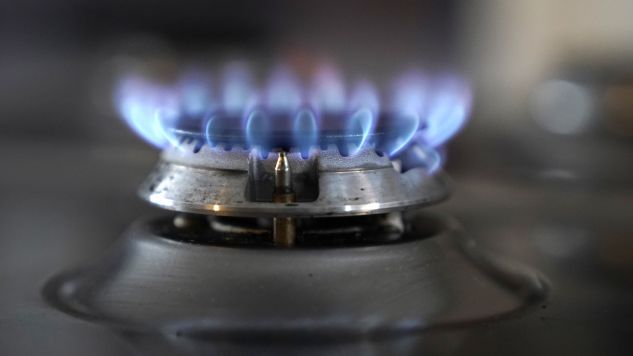 The blow to the Germany economy could amount to a staggering EUR 193 billion if Russia continues suspending gas deliveries. Photo: Andrew Matthews/PA Images via Getty Images

Poland has undertaken preventive measures that helped it become independent from Russian gas. This is mainly due to its gas supplies diversification policy with the Baltic Pipe as its cornerstone. On Monday, the Office of Technical Inspection (UDT) issued a permit for the exploitation of the Polish onshore section of the pipe, namely at the Niechorze-Płoty line. As a result, the entire onshore stretch of the pipe on Polish soil has received all the necessary permits.

Thus, the Baltic Pipe construction is proceeding according to plan. “Tests and reception procedures are carried out at pipelines and land infrastructure [in Poland]. Thanks to the efficient investment collaboration, the pipe will be ready for ribbon-cutting according to plan, that is, by October 1, 2022,” Tomasz Stępień, CEO of the national gas transmission network operator Gaz-System, said.

Baltic Pipe is a nearly ready north-south gas pipeline designed to bring Norwegian gas to Danish and Polish markets. Investors in the project are Danish Energinet and Polish Gaz-System. In line with the plan, the pipe is to reach full capacity in early 2023. Upon its launch in October 2022, the pipe will boast a capacity of 2 to 3 bln cubic metres per year. In 2023, this will be upped to its maximum capacity of 10 bln cubic metres per annum.

Apart from Poland, the Baltic States of Estonia, Lithuania and Latvia ceased importing Russian gas on April 1. This was possible thanks to more intensive usage of the Floating Storage Regasification Unit in Lithuania’s Klaipėda. To meet the Baltic States’ long-term demand for gas, Estonia and Finland plan on putting an FSRU in Estonia’s harbour of Paldiski. Moreover, both Poland and Estonia receive Finland’s gas through the Balticconnector offshore pipeline.

Germany in peril from its reliance on Russian gas

Germany has undertaken its own set of countermeasures. To cushion its economy against the impact of the Russian weaponisation of gas, Germany has entered stage two of its three-tier emergency gas plan. The next step would be, if necessary, for the government to ration fuel consumption.

The German government has warned of recession if Russian gas flows are halted. The blow to the economy could amount to a staggering EUR 193 billion and, as shown by last month’s data from the VBW industry association of the state of Bavaria, it could become palpable in the second half of this year.

“The abrupt end of Russian gas imports would also have a significant impact on the workforce in Germany … Around 5.6 million jobs would be affected by the consequences,” VWB’s managing director Bertram Brossardt said.

“If Nord Stream gets cut off, or if Germany loses all its Russian imports, then the effect will be felt on the whole of north-western Europe,” Dutch energy minister Rob Jetten said in an interview with Reuters on Thursday, adding that the Dutch Groningen gas field could still be called upon the help neighbouring countries in the event of a complete cut off in Russian supplies, but ramping up production would risk causing earthquakes.

The Kremlin’s gas blackmail policy, however, is a double-edged sword as a halt of supply through Nord Stream 1 would hurt Russia’s economy as well due to loss of revenues.

As shown by data from Russia’s finance ministry, a source that needs to be treated with at least a pinch of salt, Moscow is expected to receive 393 billion roubles (EUR 6.25 billion) in extra oil and gas revenues in June compared with the amount expected in its budget planning.

It expected 259 billion roubles above its budget plan for July.