Some 11,000 soldiers rallied up on the Red Square in Moscow for the Victory Day parade marking the 77th anniversary of victory over Nazi Germany — a celebration that many were concerned would become a scene for Russian strongman Vladimir Putin to announce or initiate further escalation of his unjustified and heinous invasion of Ukraine.

Russian ambassador doused with red substance during May 9 celebrations

Although many waited with bated breath, no such thing had happened by late morning (CEST) in Moscow. In his 11-minute speech, the Russian leader, contrary to expectations, neither declared war against Ukraine nor did he announce partial or general army mobilisation.

Instead, Putin held his own spewing the by-now threadbare delusions of Russia fighting Nazism in Ukraine. He compared the war waged by Russia against Ukraine to its clash with Germany during WWII.

Saying that “Russia pre-emptively responded to aggression,” the leader unfoundedly claimed “the West was preparing for an invasion of Russia, NATO was creating tensions at the borders. They did not want to listen to Russia, they had other plans.”

The Russian leader made baseless claims that Kyiv had wanted to acquire nuclear weapons with the use of NATO, which, according to the Kremlin strongman, had begun to explore lands located in the vicinity of Russia. He pictured those vaguely outlined actions as a threat to Russia. “All indications were that armed struggle was necessary,” he said.

The ridiculous claims were met with clear rejection from Senior Ukrainian presidential adviser, Mykhailo Podolyak, who stressed that “NATO countries were not going to attack Russia. Ukraine did not plan to attack Crimea.”

Calling Russia’s invasion of Ukraine “a special military operation”, finding the decision to undertake it “a necessity”, Putin went on to say that the Russian soldiers were fighting for “the Motherland” in Donbas, “so that no one forgets the lessons of World War II”.

“It was the right decision of a strong and sovereign country that Russia is,” he said.

Commenting on Putin’s speech, British Defence Minister Ben Wallace said that for Russia “there can be no victory day, only dishonour and surely defeat in Ukraine… He [Putin] must come to terms with how he’s lost in the long run, and he’s absolutely lost. Russia is not what it was.” 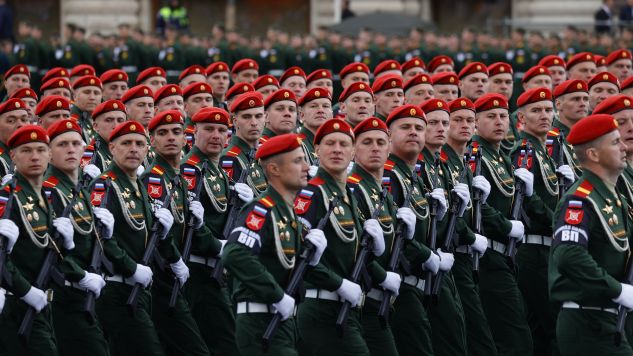 ‘Darkness returned to Ukraine’: Zelenskyy on anniversary of WWII end in Europe

In his address issued on the 77th anniversary of the end of WWII in Europe, Ukrainian president Volodymyr Zelenskyy stressed that “darkness…

Blue skies too ‘adverse’ for the Russian Air Force?

With a blue sky above the heads of crowds gathered at the Red Square, one may wonder what happened to the much-awaited military flyover.

The attraction was abruptly cancelled in Moscow and in at least two other major cities that were due to hold parades of their own.

As the Kremlin’s spokesperson and master spin doctor Dmitry Peskov put it on Monday, the air portion of Moscow’s Victory Day parade in the city’s Red Square had been cancelled “due to the weather.”

While the sun was shining on the Russian leader’s balding head and the oversized military hats of his cronies, the local weather forecasts warned of light rain showers and moderate breeze until 7 pm local time in Russia’s capital — apparently too adverse weather conditions for the Russian Air Force to handle.

Hundreds of kilometres away, in the Russian city of Novosibirsk, military flyovers were also ditched “due to adverse weather conditions at departure airfields.”

While Putin stuck to his guns in his speech, the absence of many military units at the parade was clearly visible. Compared with the previous year’s parade when 191 military vehicles took part, this year only 129 units crossed the Red Square — a number confirmed by Russian authorities.

Experts linked the changes to losses sustained by Russia in the ongoing war with Ukraine.

Ukrainian President Volodymyr Zelenskyy, commemorating victory over Nazi Germany in World War Two, said on Monday his country would win in its war with Russia and would not cede any territory.

“On the Day of Victory over Nazism, we are fighting for a new victory. The road to it is difficult, but we have no doubt that we will win,” he said in a written address.

President Zelenskyy said Ukrainians were a free people who had fought to defend their land many times in history and had their “own path”.

He went on to say that “there are no shackles that can bind our free spirit. There is no occupier who can take root in our free land. There is no invader who can rule over our free people. Sooner or later we win.”