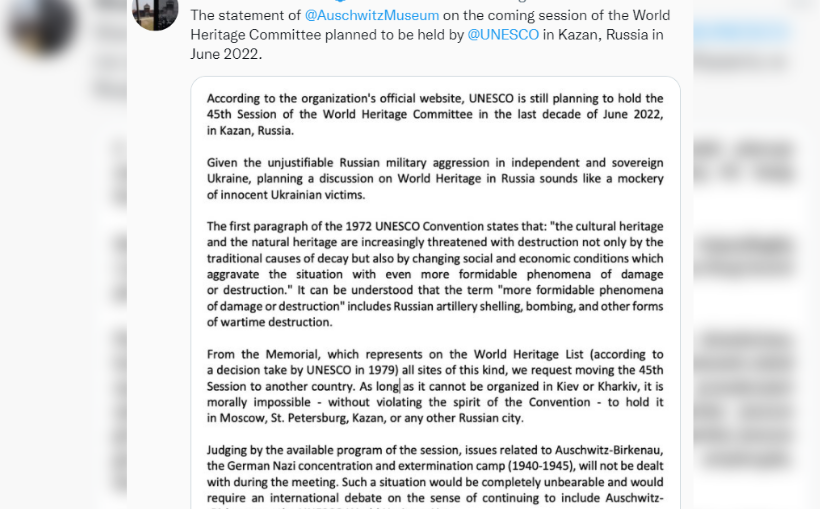 The Auschwitz Museum has appealed to UNESCO not to hold the 45th session of the World Heritage Committee in Kazan, the Russian Federation, in late June 2022.

“After the Russian invasion of Ukraine, UNESCO’s plan to hold a debate on world heritage in Kazan, Russia, is like a joke being made of the innocent Ukrainian victims,” reads an appeal made by the Auschwitz Museum on Saturday evening.

The museum sharply criticised the completely unjustified Russian aggression against the sovereign and independent state of Ukraine, and stated that the announcement of the 45th session of the World Heritage Committee in Kazan was still on the UNESCO website.

The Auschwitz Museum added that its appeal not to hold the session in Russia had been launched from the Remembrance Site, inscribed on the World Heritage List in 1979.

“As long as this session cannot be held in Kyiv or Kharkiv, it is morally unacceptable – without violating the spirit of the (UNESCO – PAP) Convention – to organise it in Moscow, St Petersburg, Kazan or any other Russian city,” reads the statement.

The Germans established the Auschwitz camp in 1940, initially for the imprisonment of Poles. Auschwitz II-Birkenau was opened two years later and became the main site for the mass extermination of Jews. There was also a network of sub-camps in the complex. The Germans killed at least 1.1 million people at Auschwitz, mainly Jews, but also Poles, Roma and Soviet prisoners of war.

The Auschwitz Museum, located on the memorial site of the notorious WW2 Nazi German death camp in southern Poland, opened in 1947.