The Ukrainian parliament has approved a declaration of a state of emergency in the entire country, except for two eastern regions where it has already been in place since 2014.

Russian-backed separatists in Donbass in eastern Ukraine violated the truce 96 times in the past 24 hours, the Joint Operational Staff of the Armed…

President Volodymyr Zelenskiy proposed introducing a nationwide state of emergency earlier on Wednesday, as the country braces for a possible large-scale military offensive from Russia.

The state of emergency comes into force at midnight local time (10:00 GMT). It will last 30 days and can be extended for another 30 days.

The declaration means that Ukraine can impose restrictions on the freedom of movement of conscripted reservists and curbs on the distribution of information and media, as well as introduce personal document checks.

It also gives authorities a right to impose a curfew and ban mass gatherings and strikes.

On Wednesday, Ukraine’s parliament voted to approve in the first reading a draft law which gives permission to Ukrainians to carry firearms and act in self-defence.

“The adoption of this law is fully in the interests of the state and society,” the authors of the draft law said in a note, adding that the law was needed due to “existing threats and dangers for the citizens of Ukraine.” 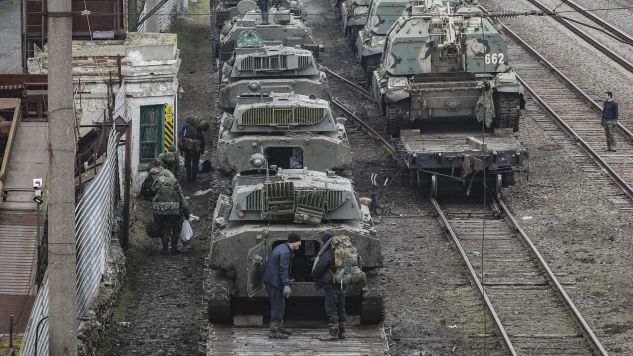 “If the West does not recognise Ukraine as part of the Russian world, the Kremlin will ruin it,” Sławomir Dębski, the head of the Polish Institute…

Also on Wednesday, the country’s parliament approved sanctions against 351 Russians, including lawmakers who supported recognising the independence of two separatist-controlled territories in eastern Ukraine and the deployment of Russian troops there.

The sanctions assume, among other things, barring those covered by them from entering Ukraine and preventing their access to assets, capital, property and business licences.

“We should address the national security council to immediately impose sanctions against criminals, against every deputy of the State Duma of Russia, who voted for dismembering
Ukraine,” Iryna Volodymyrivna Herashchenko, a member of the European Solidarity faction, said before the vote.