Skip to content
You are here
Home > News > Full-scale Russian attack on Ukraine is most likely scenario: US magazine

According to the “Foreign Affairs” magazine, there are three possible forms of a Russian attack on Ukraine – the annexation or formal recognition of the independence of Donbas, a limited invasion into the east of the country and the occupation of these areas, and – according to the magazine, the most likely – a full-scale attack on many fronts focused on destroying Ukrainian army and infrastructure.

Paris, Berlin intend to work on de-escalation between Russia and Ukraine

After a meeting with Chancellor Olaf Scholz in Berlin, French President Emmanuel Macron assured that Paris and Berlin would intensify their efforts…

As the magazine emphasised, diplomatic efforts have not diminished tensions at the Ukrainian-Russian border, but have exposed the gulf between Russia and the West.

“Russian President Vladimir Putin seeks nothing short of the complete dismantling of Europe’s post-Cold War security architecture and a rollback of fundamental international agreements governing states’ rights to self-determination – an outcome the US and its partners and allies will never accept,” it wrote.

As the authors of the article emphasised, there are three possible options for a Russian attack on Ukraine.

First scenario – annexation of the Donbas

The first analysed scenario is the annexation by Russia of the Donbas region, currently occupied by its dependent separatists, or the recognition of the independence of the self-proclaimed republics functioning there. The aim of these actions would be to force a diplomatic solution to the current crisis, which would avoid further military escalation and at the same time enable Moscow to announce its victory.

However, as the magazine emphasised, such a move would cement the current status quo and prevent the Kremlin from significantly interfering with Ukraine’s domestic policy. 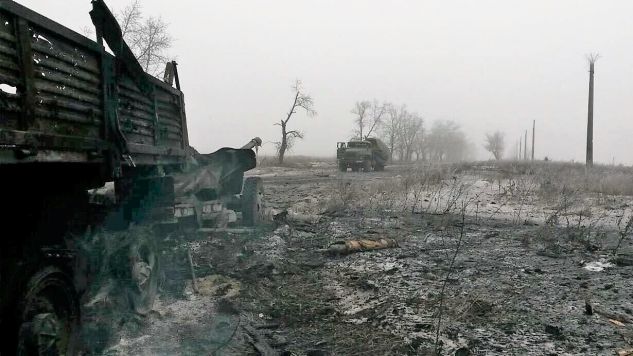 The War in Donbas has been ongoing since 2014, photo: wikimedia commons/Міністерство оборони України

The second option assumes a limited Russian offensive and the occupation of territories in eastern Ukraine, including Mariupol – the main Ukrainian port on the Sea of ​​Azov – and Kharkiv – a large urban and industrial centre. According to the magazine, Russian forces could try to create a corridor connecting the occupied Crimea with Russian territory or carry out a landing operation to capture Odessa.

This strategy would deprive Ukraine of access to important ports, and Russia would solve its problems with supplying Crimea. According to the authors of the article, such an operation would require the involvement of all Russian forces gathered around Ukraine, which would be costly for Moscow, weaken the power in Kiev but not lead to the collapse of the Ukrainian state.

The third and, according to the magazine, most likely scenario is “a full-scale Russian offensive with land, air and sea forces in all directions of attack.”

As emphasised by the “Foreign Affairs,” in this instance, Russia would use long-range artillery, short-range ballistic missiles and cruise missiles on a massive scale, leading to the death of tens of thousands of people and a humanitarian disaster.

“If all went according to Russia’s plan, the attacks would cripple the Ukrainian government, military, and economic infrastructure – all important steps toward the goal of rendering Ukraine a failed state,” the magazine assessed.

Click here to read the whole article in “Foreign Affairs”.