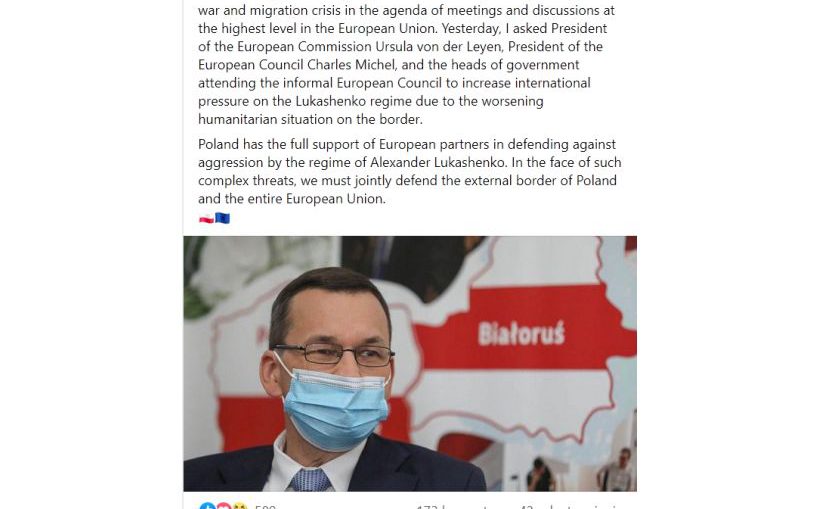 According to the prime minister, Poland has the full support of European partners in its efforts.
Mateusz Morawiecki/Facebook

Poland is protecting the EU’s borders in the spirit of international conventions and obligations, Mateusz Morawiecki, the Polish Prime Minister has said.

The Polish-Belarusian border has come under increasing migratory pressure in recent months with a growing number of people trying to cross into Poland from Belarus.

“The measures we are taking to solve the migration crisis caused by the (Belarusian president Alexander) Lukashenko regime on the eastern borders of the EU are comprehensive,” Morawiecki wrote on Facebook on Wednesday.

“We are trying to protect our borders in the spirit of international conventions and obligations, prevent a humanitarian crisis, and counter any threats posed by a hybrid attack aimed at Poland and the whole European Union,” he added.

His comments follow recent accusations that the Polish authorities had flouted international conventions, in particular the European Convention on Human Rights, in their treatment of some of the migrants trying to cross the border.

Focusing on the role of Belarus Morawiecki also said that Lukashenko’s clear goal is “to open ‘a new route’ for Arab migration into Europe and destabilise the situation in the whole EU,” by “the instrumental use of migrants from Iraq, Syria, Morocco and other countries.”

“In the face of such complex threats, we must jointly defend the external border of Poland and the entire European Union” Morawiecki wrote.

According to the prime minister, Poland has the full support of European partners in its efforts.

He added that to “meet the needs of those people who legally arrived in Belarus”, Poland had decided to send another humanitarian aid convoy to the country.

“We have sent a note to the authorities in Minsk in which we express our readiness to send a humanitarian convoy. We would like to help those people who, due to negligence on the part of the inviting state – Belarus – have not been provided with decent living conditions.” Morawiecki wrote in his Facebook post.