Skip to content
You are here
Home > News > Behind closed doors: the secretive convent harking to the days of King Jan Kazimierz

In the very heart of Warsaw’s city centre lies a huge yet normally unseen secret garden where time has stood still since the Swedish Deluge and the time of King Jan Kazimierz in the 17th century.

This huge slice of prime real estate that spreads down Warsaw’s embankment belongs to a congregation of nuns called the Sisters of Charity and covers a whopping five hectares. 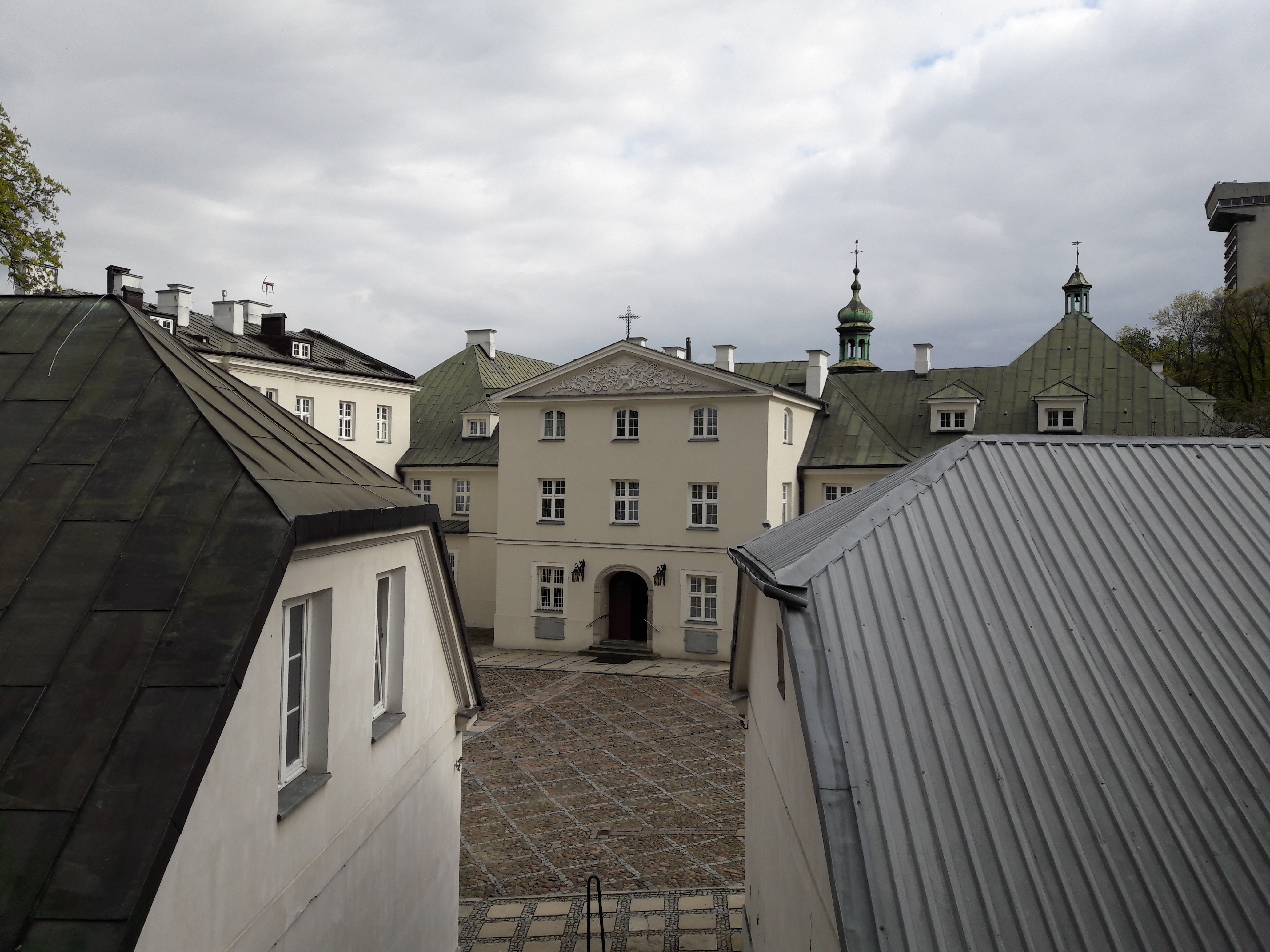 It appears as an enclave from a completely different world, unchanged for centuries.  Artinpl/Wikicommons

The convent is not open to visitors, and its vast gardens can only be peeked at through a fence at the top of Warsaw’s embankment just yards from Foksal street with its bustling bars, restaurants and lively clubs. From there, it appears as an enclave from a completely different, rural world, unchanged for centuries.

To the south, it is boxed in by busy lanes of cars, buses and trams on Jerozolimskie avenue, and to the east by the fashionable district of Powiśle. The land is the only farm in the capital’s city centre. 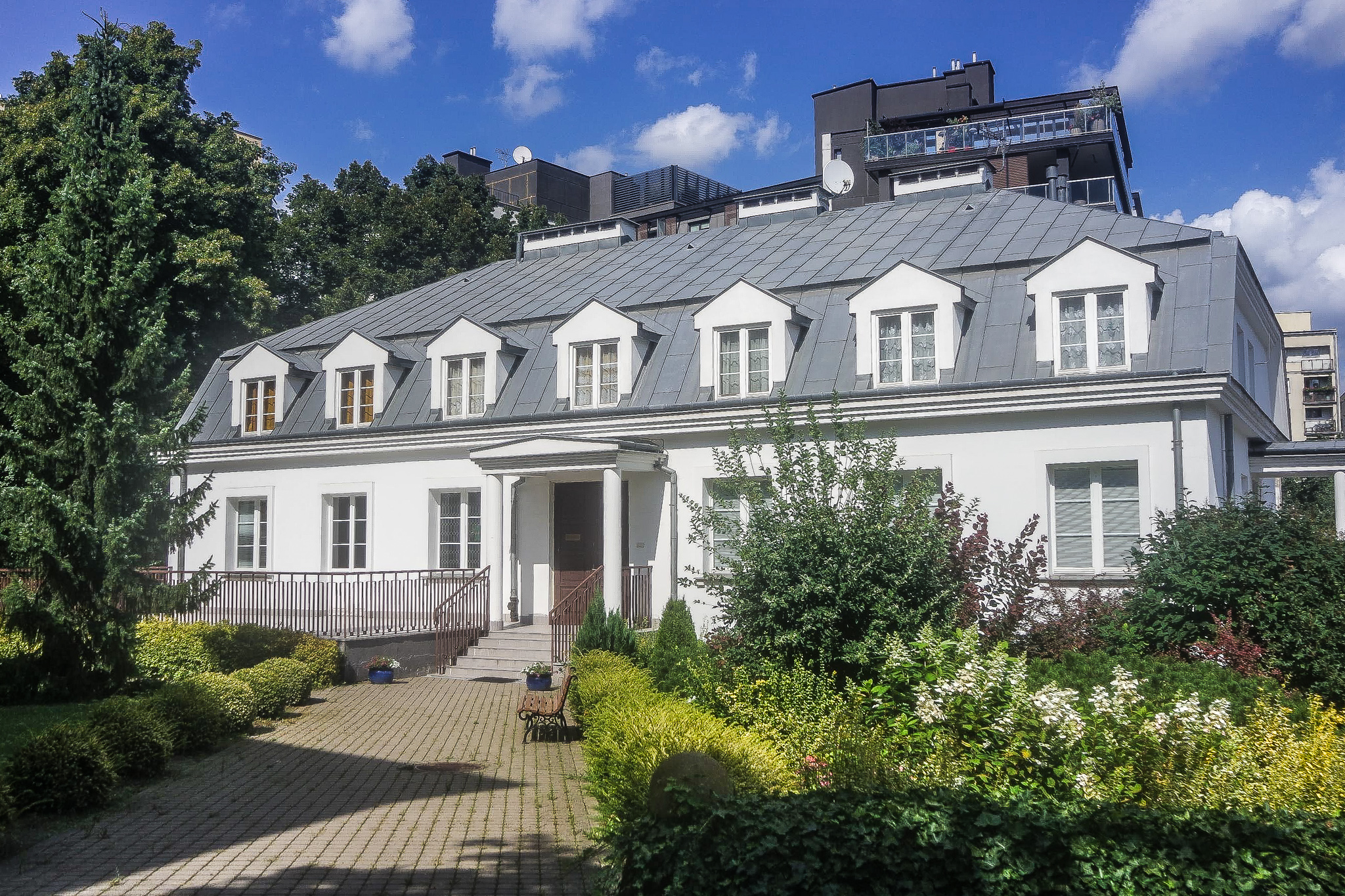 Though the garden and convent are normally strictly off limits, the Sisters of Charity recently offered a rare glimpse of what lurks behind their walls. They explained their history and talked about their 350-year mission in Poland.

The sisters are members of the Congregation of the Daughters of Charity of St. Vincent de Paul, a female Catholic religious order founded by Vincent de Paul in France in 1633.

It is one of the largest congregations of nuns in the world with nearly 27,000 sisters in 91 countries, including more than 900 in Poland. 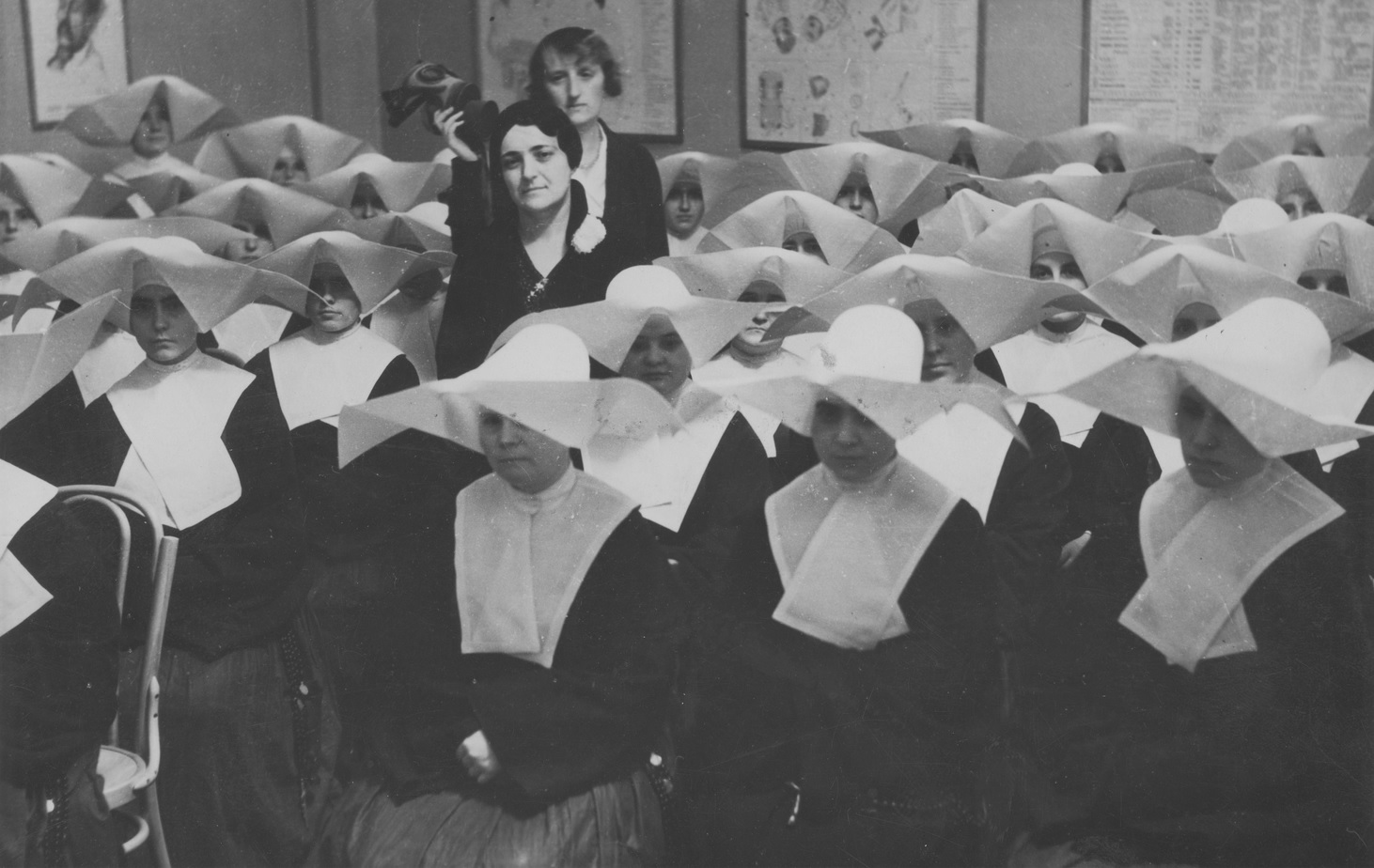 Seen in their characteristic wimples, the sisters are members of the Congregation of the Daughters of Charity of St. Vincent de Paul, a female Catholic religious order founded in 1633.  Public Domain

Their motto – The love of Crucified Christ urges us on! – drives the sisters in their mission to support the sick and the weak by running hospitals, homes for the elderly, orphanages and schools.

In Polish they are popularly known as the Szarytki, or the Grey Nuns, but curiously they wear blue habits. The name comes from the French word charité. When Poles heard the first group of sisters from France describe themselves with this word, they quickly polonised the name to Szarytki. 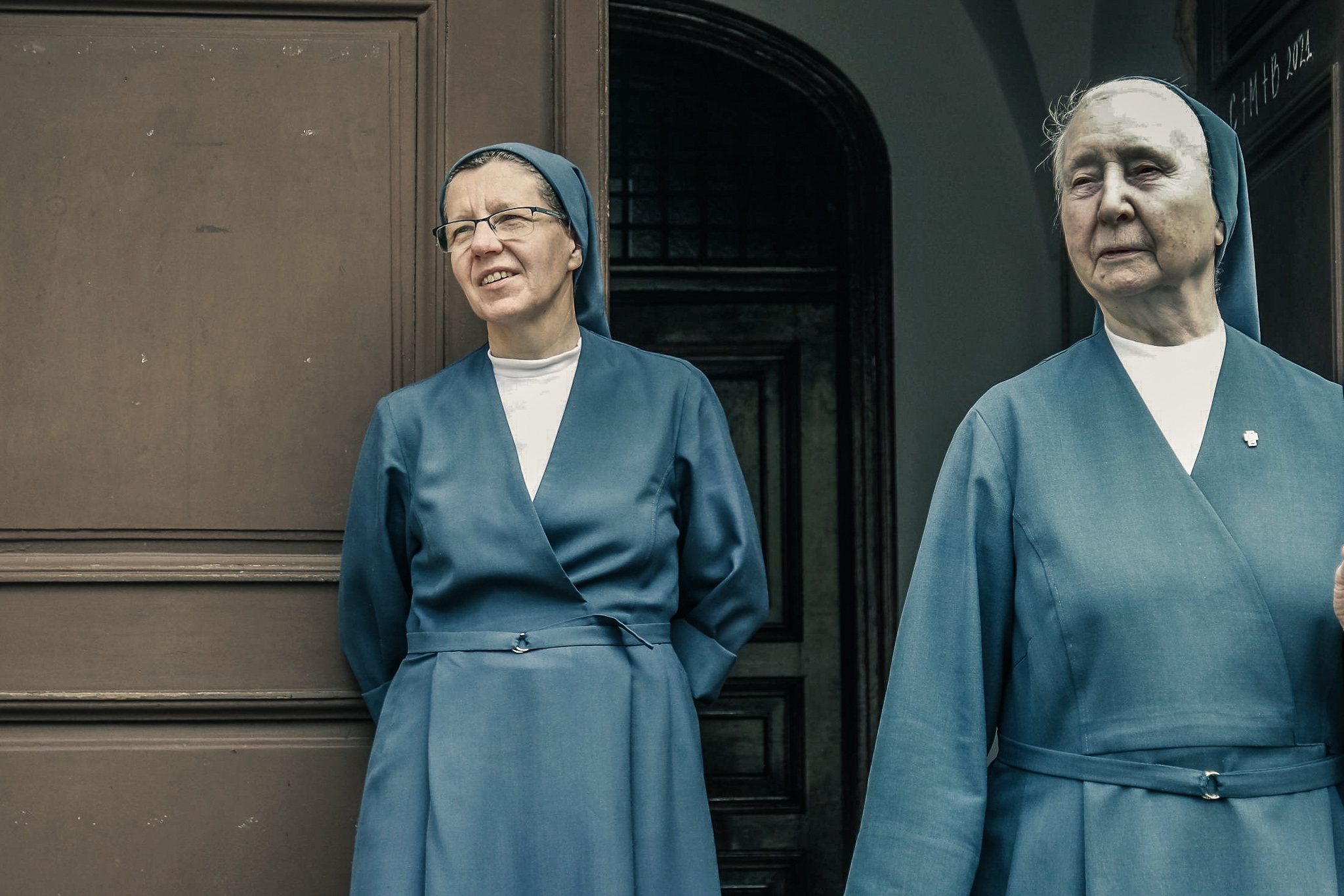 The sisters they have a mother and a father: Queen Louise Maria Gonzaga, wife of King John Casimir, and St. Vincenty a Paulo, who founded the order in France.  Stuart Dowell /TFN

The convent is entered through a large wooden gate just of Tamka street, one of Warsaw’s oldest thoroughfares, which pitches sharply downhill from the centre to Powiśle.

The short path that leads to the gate was given the name Zaułek Ku Szarytkom (To the Szarytki Alley) by Warsaw City Council in 2017. When the remote-control-operated gate opens slowly the impression is of travelling back in time; cobblestone paving, a granary and a manor house that harks back to the Polish First Republic and the time of King Jan Kazimierz create a sense of old-world charm. 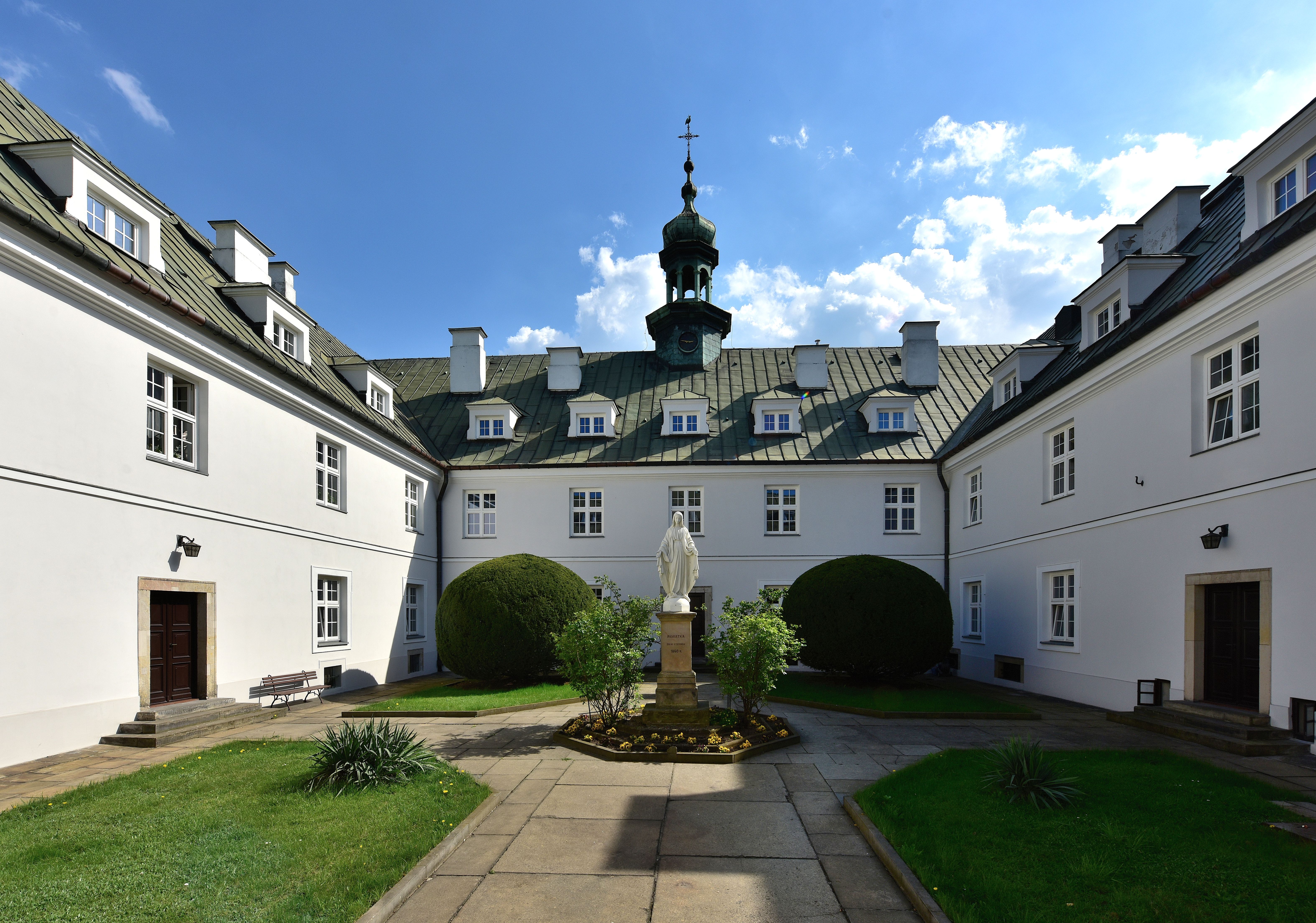 {The convent harks back to the Polish First Republic and the time of King Jan Kazimierz – the sense of old-world charm is never far away.  Adrian Grycuk/Wikicommons

Sister Jadwiga, the convent’s archivist, met us on the steps of the main building and talked about the history of the place.

“We sisters have a mother and a father. Our mother is Queen Louise Maria Gonzaga, wife of King John Casimir, who brought the first Sisters of Charity to Poland in the autumn of 1652,” she says. “Our father is St. Vincenty a Paulo, who founded the order in France.”

The first three sisters set out from Paris on 7 September 1652. They arrived in Poland in November of the same year, stopping in Łowicz, where the royal court was located due to the plague.

When they first arrived in Warsaw, they initially lived near the Church of the Holy Cross.

“They immediately began their activities, caring with all their zeal for both the condition of souls and the material needs of Warsaw’s poor,” Sister Jadwiga said.

Their duties included collecting the poor affected by the plague from the streets and placing them in the Holy Cross hospital, nursing the sick, educating orphans and poor girls and distributing alms.

The Queen was very favourably disposed towards the sisters and went to great lengths to help them in their mission.

In 1659, in order to secure their future, she bought them a manor house with land at the foot of the Ostrogski castle nearby the Tamka ravine, and gave it to the sisters.

The nuns moved in there with 15 orphans on 7 June 1659. Initially, the convent buildings were wooden. With time, the area was expanded thanks to private bequests of the wealthy. This allowed them to replace the wooden buildings with brick ones and to build more facilities.

The nuns also set up an extensive fruit and vegetable garden. Although it was once larger than today, it has retained its historical layout of paths and alleys and still serves the needs of the sisters. 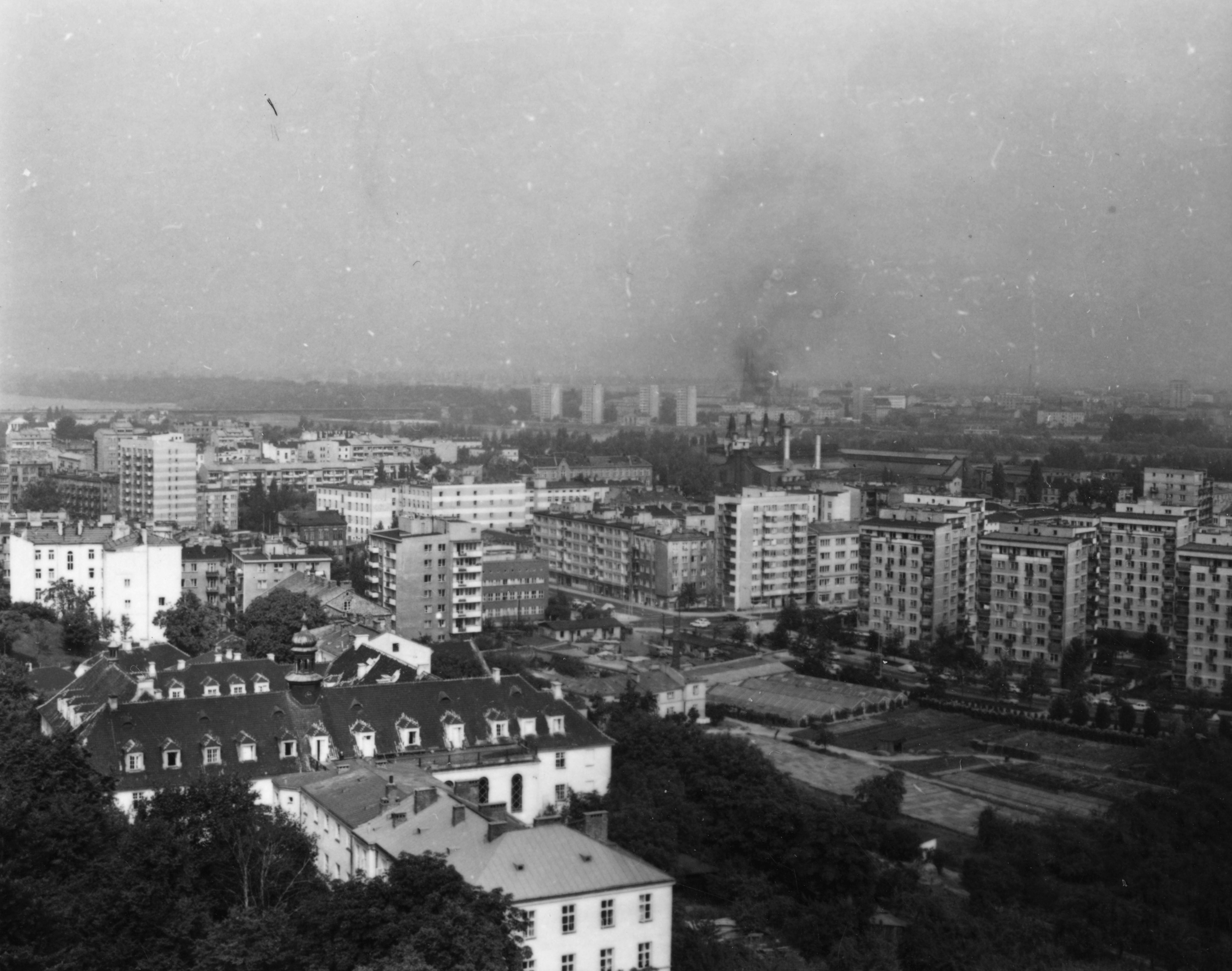 Pictured in 1972, the shattered ruins of the monastery complex were later rebuilt after sustaining severe damage during the war.  Mariusz Szyperko/PAP

Earlier, the sisters were heavily involved in saving the children deported from the Zamość region when the Germans implemented their dream of lebensraum in the Lublin district.

Sister Lucyna, who was 22 when she entered the convent in 1938 recalled that time in Agata Puścikowska’s book War Sisters: “In 1943 the Germans took away our Polish children from the Zamość region.

“Polish railwaymen placed wagons with the children on sidings. Then we stepped in. […] We would go out and quickly move the children from the wagons to cars at night. Where these children came from, I have no idea. Forty children were taken to the hospital and then we looked for homes for them.” 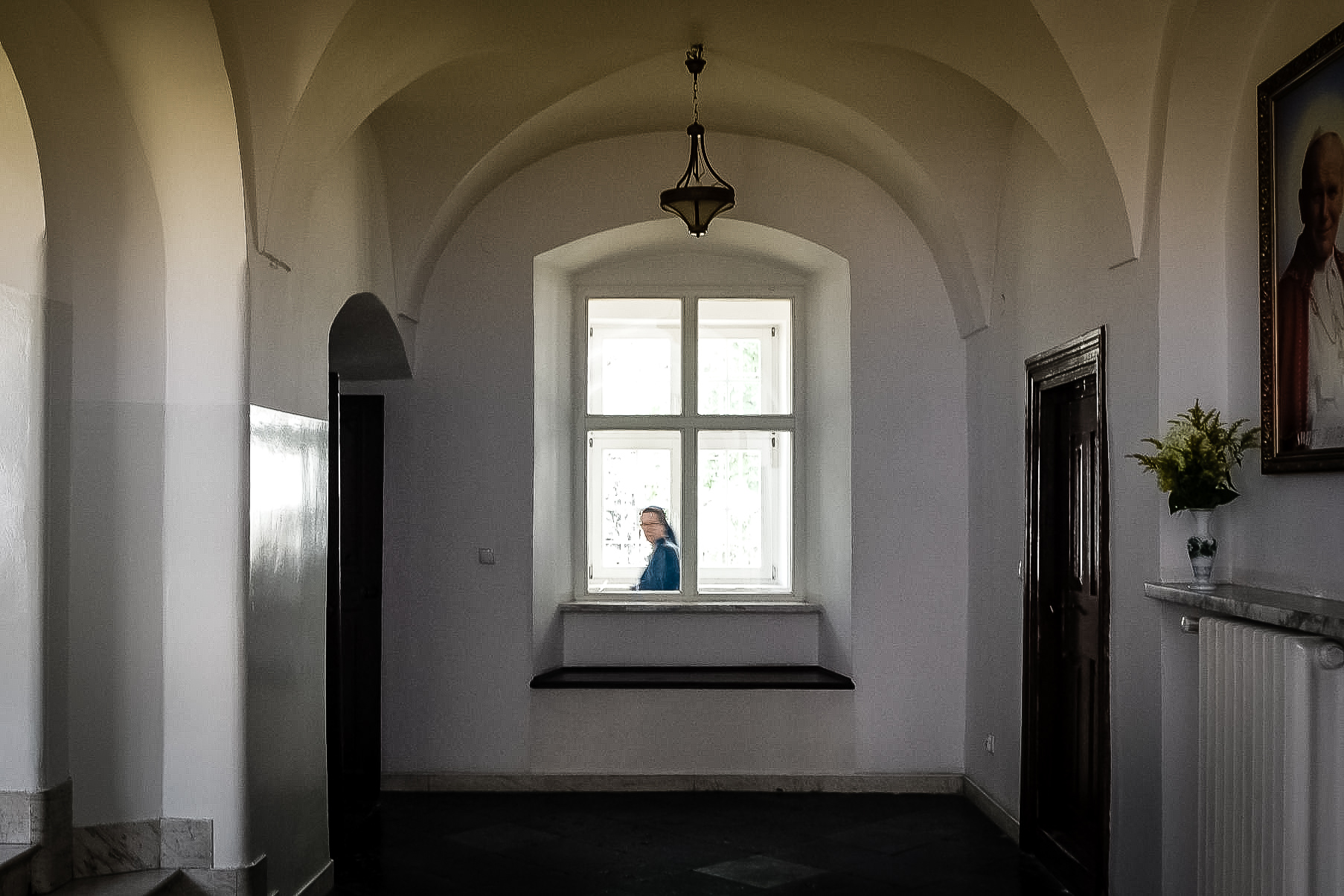 When the Uprising broke out, the sisters quickly rehoused the young children in their care to the basement and set up a hospital on the ground floor for injured insurgents.

Sister Lucyna remembered one: “I remember that eight-year-old Basia was among the insurgents. She set fire to a German tank with a bottle of petrol. She got hit. Her lung was shot. The insurgents carried her in their arms. She didn’t survive… a little heroine…”

After the Uprising, when the city’s population had been expelled to Pruszków, some of the sisters were given permits by the Germans to return for items not destroyed or looted. This created more dangers.

Sister Lucyna recalled: “The Germans, perhaps surprisingly, tolerated the white wimples of the Sisters of Charity… But we were attacked by Ukrainians, […], they wanted to rape us… We were defended by German soldiers from the Wehrmacht. Such were the times.”

It is impossible to count the number of Jews saved in the German occupation by the sisters.

They often faced a terrible conflict of conscience: should they put the children they were already caring for at risk by taking in a Jewish child or adult?

The risks were high as in occupied Poland, unlike in the western countries occupied by the Third Reich, the penalty for giving a slice of bread to a Jew could be shooting on the spot.
It is not known exactly how many Jews the sisters saved. No one kept any records, and traces of Jews’ stay in the convent were erased. 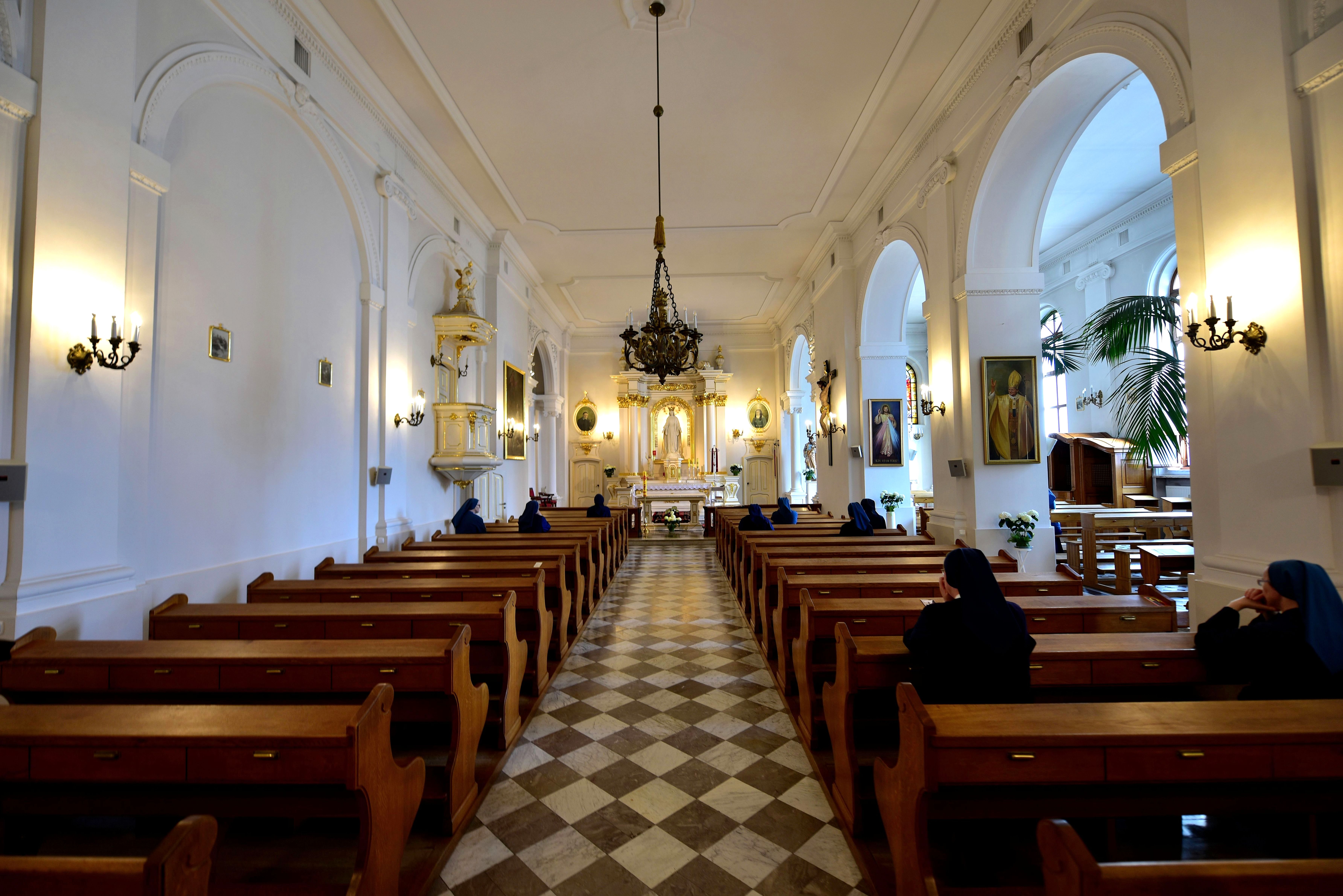 The church today has a classicist character and the buildings have been faithfully restored.  Adrian Grycuk/Wikicommons

After the war, the congregation set about rebuilding the shattered buildings and work continued up to 1956. The church today has a classicist character and the buildings have been faithfully restored. 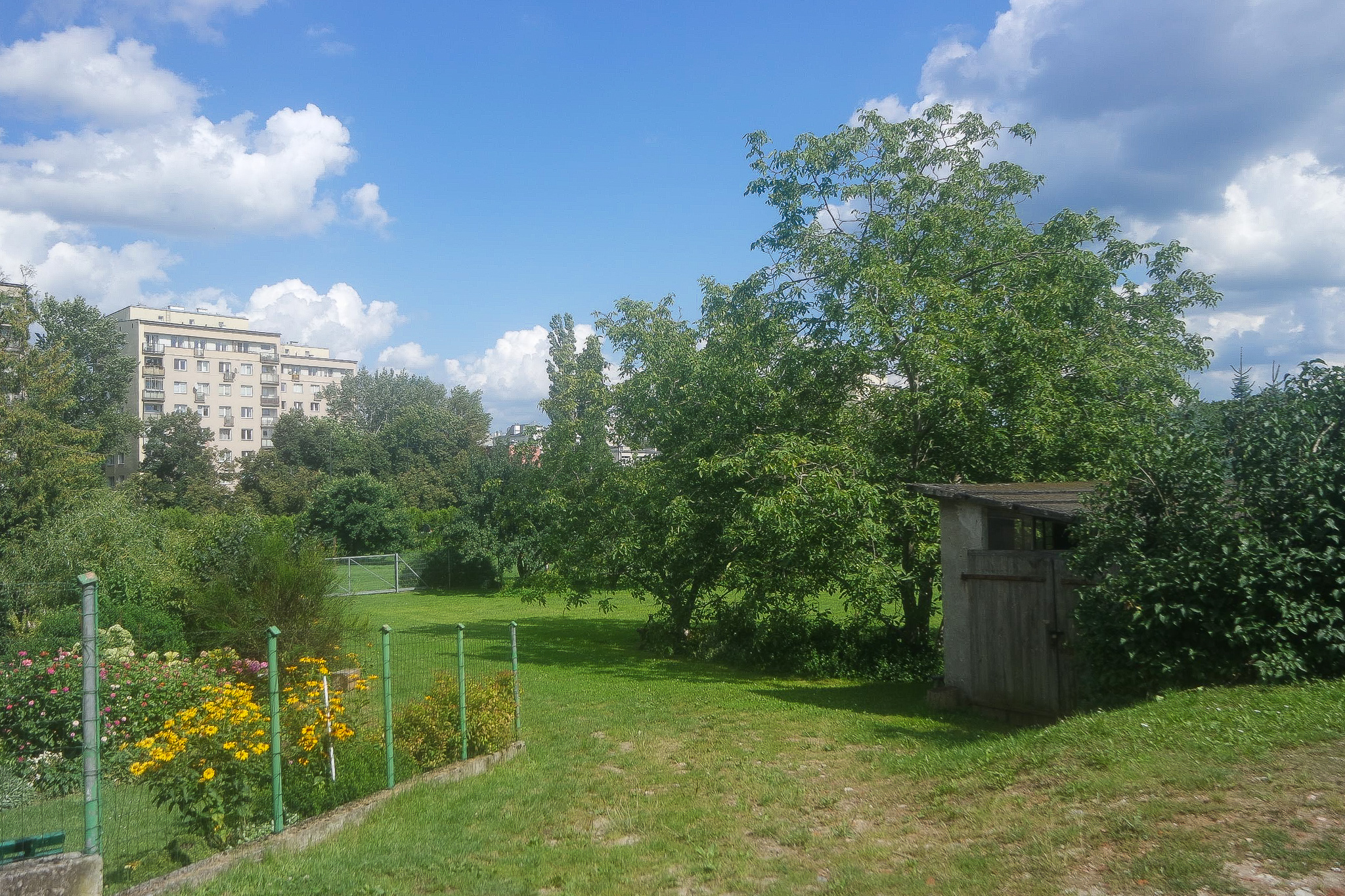 The complex is home to the only farm in Warsaw’s city centre.  Stuart Dowell/TFN

Communism brought with it difficulties for the sisters. They were removed from hospitals, kindergartens and nurseries and could only continue to work in homes for the elderly, the terminally ill and children with special needs. In 1964, the sisters did away with their characteristic starched wimples, which they called cornets.

Nowadays, the sisters can be seen working in hospitals, nursing homes, doing charity work in parishes, teaching the elements of the Catholic faith to children and adults, running retreat houses, kindergartens and summer camps.