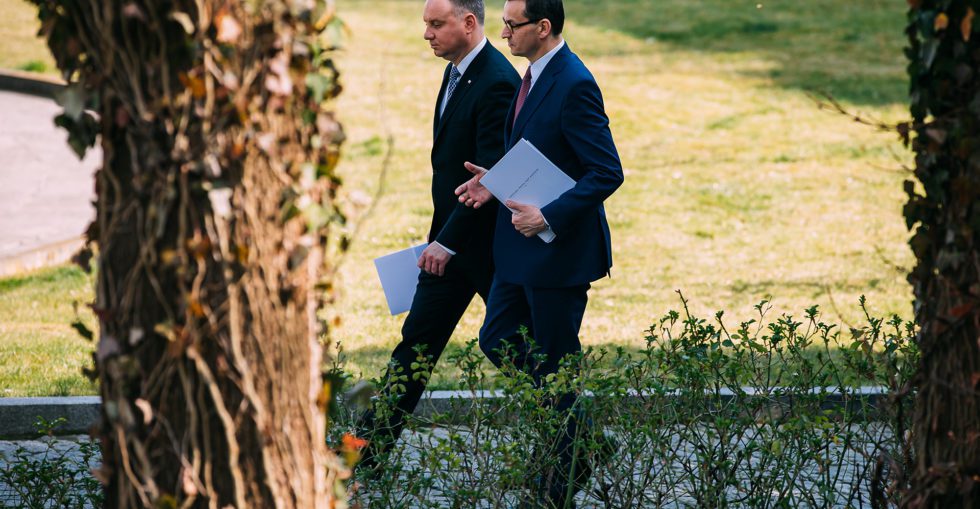 The Polish government has today unveiled an economic support package worth 212 billion zloty (€47 billion) to counter the economic fallout from the coronavirus outbreak. The epidemic, as well as the government’s tough response to it, has left many businesses and workers struggling.

The programme, nicknamed the “anti-crisis shield” and announced at a press conference on Wednesday featuring the president and prime minister, is based on five key pillars: supporting both workers and small businesses, providing additional funds for health services, bolstering banks, and boosting public investment.

The government also plans to temporarily lift the Sunday trading ban, which it introduced in 2018 and was fully rolled out at the start of this year. It has been cited as a factor in the growing number of small shop closures, reported Radio ZET.

To assist the fiscal measures, Poland’s central bank (NBP) has cut its benchmark rate by 50 basis points to a record-low 1%, despite the Polish zloty falling to its lowest level since 2016. To keep money flowing, the bank has also announced plans for Poland’s first ever quantitative easing (QE) scheme.

To help workers keep their jobs, the government will contribute 40% of wages (up to the value of the average salary), with employers covering another 40% and employees accepting a 20% cut. To qualify for the support, businesses need to have experienced a 25% fall in revenue over the past month. A wage buffer will also be provided for self-employed and part-time workers.

Struggling businesses will be able to delay social security and utilities payments. There are also plans to offer micro-loans for entrepreneurs of up to 5,000 zloty and operational leasing for the transport sector, though full details have not yet been announced.

On Monday, Finance Minister Tadeusz Kościński signed a decree allowing the national development bank (BGK) to extend its de minimis guarantees from 60 to 80% of the value of loans for micro, small and medium sized enterprises (SMEs), along with lowering commission to between 0.5 and 0%.

The government also today announced a possible extension to allowances for parents caring for young children since schools, preschools and nurseries closed last week. Yesterday it was announced that the initial two-week shutdown may be extended further.

The banking system was given a number of assurances, including liquidity packages to protect bank deposits. A fund of 30 billion zloty will be set up to boost public investment, such as in roads and schools, as well as continued projects in energy and the environment.

The health sector is due to receive an additional 7.5 billion zloty for hospitals on the front-line of the fight against the coronavirus, including funds for additional protective gear and medical tools, following reports of shortages in basic equipment in past weeks.

A laundry-list of business demands

The coronavirus outbreak has squeezed business. On the one hand, demand has dwindled as Poles have stayed at home; on the other, supply has been limited by worker shortages and production cuts. Tourism and sport have been hard hit, along with mounting problems for events firms, gastronomy and retailers.

Many firms worry that they may soon run out of cash. In a letter addressed to the prime minister, Poland’s commissioner for SMEs has asked for the automatic renewal of working capital loans, which are usually extended after a firm presents satisfactory financial results – a legal requirement which will be hard to meet in the coming months.

The commissioner also suggested that fixed social security contributions should be made voluntary for six months, so that businesses can themselves decide whether they can afford accident, pension and health insurance at this time, reported PAP.

The Polish Employers Federation (FPP) has asked that the social security agency supports workers on sick leave or in quarantine, starting from day one, rather than after 33 days, as is now the case. They argue that this would dissuade employees with coronavirus symptoms from coming to work.

The organisation is also pushing for guarantees for public tender contractors who may be unable to deliver given the lock-down, reported Business Insider.

Pracodawcy RP, the country’s largest employers association, has asked for delayed social contribution payments, as well as putting off new tax measures, such as the government’s “offensive to close VAT loopholes”, which it called “an incredible impediment to the operation of firms”.

Poland’s three largest chains, Multikino, Cinema City and Helios, have also issued an open letter to the entrepreneurship minister outlining their woes: “We are unable to make revenue, but at the same time we have to pay the large costs of credit, rent and wages.” They have asked for financial reliefs and wage subsidies to help them endure the closure, reported the Wirtualna Polska news site.

All cinemas were ordered by the government to close on 12 March, along with museums, opera houses and galleries. Helios cinemas reported that a two-week closure would cost the company an estimated 9 million zloty in revenue and 1.5 million zloty in profits.

While the government’s fiscal policy shoulders part of the burden on the private sector, the Polish central bank is implementing a number of monetary measures to support the revival of the economy.

Amid global market fears, the Polish zloty has sunk to its lowest level since 2016. Despite this, the central bank has implemented looser monetary policy, cutting its base interest rate to 1%, which is the lowest in history.

Poland’s central bank also announced unprecedented measures to keep money flowing through the system, including Poland’s first QE scheme, which involves buying up government bonds from the market to keep traction ahead of new batches being released.

To provide banks with enough liquidity, Poland’s central bank will also issue repurchase agreements, a form of cheap short-term lending, where the central bank buys government securities from financial institutions, thereby giving them an injection of funds, and later sells the securities back at a slightly higher price.

As a result of the economic turmoil, it has become clear that the government’s 2020 budget, which was due to be the first without a deficit in post-1989 history, will have to be revised. “It is obvious that we will have to amend the budget,” Deputy Prime Minister Jacek Sasin told RMF FM on Monday.

For one, the 212 billion zloty cost of the economic support package (9.2% of Poland’s GDP) was not included as an expense in the original budget. Moreover, the budget calculations assumed 3.7% GDP growth in 2020. Yet on Wednesday morning Moody’s cut its GDP growth forecast for Poland from 3.7% to 3% due to the economic fallout from the pandemic. Other analysts have revised the figure even further downward.

The government fears that the Polish economy could fall into a similar sink-hole as other hard-hit countries. As of February, in China investment fell by a quarter relative to 2019, sales dropped by a fifth and industrial production slowed by 13.5%, reported Business Insider.