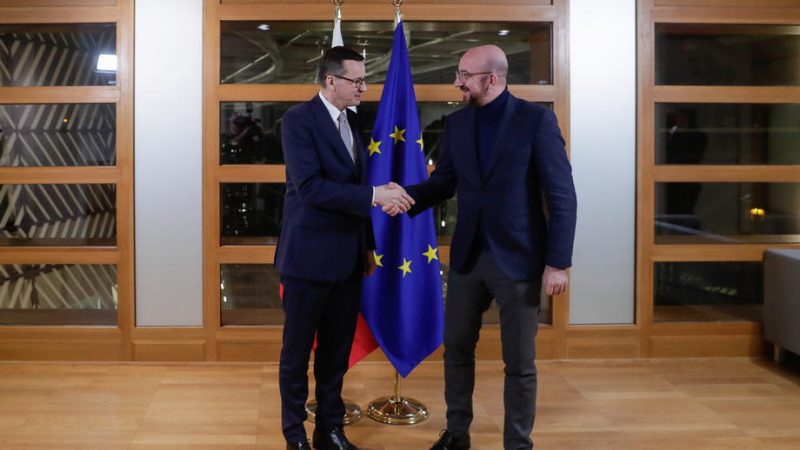 Poland would see its €2 billion share of the EU’s Just Transition Fund cut in half under a new EU budget proposal published on Friday (14 February), which penalises countries that have not signed up to the bloc’s 2050 ‘climate-neutrality’ goal.

The European Commission unveiled the Fund last month as part of its wider Just Transition Mechanism, a €100bn package of grants and investments that is designed to help countries enact stricter climate policies and deal with the impacts of going green.

Michel’s tweaked version of the EU’s seven-year budget, known as the multiannual financial framework (MFF), proposes a slight increase in the EU budget – from 1.067% to 1.074% of the bloc’s GDP.

The difference amounts to exactly €7.5bn, according to Valérie Hayer, a French lawmaker from the centrist Renew Europe group who is part of the European Parliament’s budget negotiating.

But that hasn’t bridged the divide between net recipients to the EU budget – such as Poland – and net contributors such as Germany.

Poland was the big winner of the Commission’s JTF proposal, as it was allocated a share of €2bn from the pot, which is the top limit of funding per country the EU executive has imposed on the Fund. Second-place Germany is eligible for just over €800m.

But the rug has been pulled from under Warsaw’s feet, as Michel’s budget plan curtails funding by 50% for any country that has not yet signed up to the EU’s overall mid-century climate goal.

“For member states that have not yet committed to a national objective of climate neutrality by 2050, access to the Just Transition Fund will be limited to 50% of their national allocation,” Michel’s proposal explains.

The text is aimed squarely at Poland, which is now the only country not to have committed fully to the net-zero emissions plan. At a December Council summit, the other then-27 member states all agreed to the target, while Poland won itself a derogation until June.

Polish Prime Minister Mateusz Morawiecki continued his insistence that the costs involved with the 2050 target, which aims to make the EU’s economy compliant with the Paris Agreement, are simply too high and that he was not willing to set “any new dates”.

His Czech and Hungarian counterparts had also said before the summit that the costs precluded their involvement but they eventually yielded after leaders agreed to include positive language about nuclear power in the meeting’s conclusions.

Poland’s decision drew criticism from other leaders, most notably France’s Emmanuel Macron, who said that Warsaw should be excluded from Green Deal funding if it does not take part in collective exercises.

The French President warned that if Poland does not come onboard by the end of a planned summit in June, then “it would itself step outside European mechanisms, including mechanisms of financial solidarity”.

Michel’s budget compromise goes some way to acknowledging Macron’s wishes but it also clarifies that the withheld funding would be “made available upon the acceptance of such a commitment” – a reference to the 2050 climate goal.

Devil in the detail

Poland’s continued objections to the mid-century climate roadmap took some political analysts by surprise, as they thought the collective nature of the net-zero emissions target would be enough to convince Warsaw.

The Commission’s proposed plan foresees the EU curbing greenhouse gas output to such an extent that natural carbon sinks like forests and wetlands, as well as carbon capture technology, can absorb any remaining emissions.

Countries like Finland, Scotland and Sweden have all pledged to reach net-zero and become carbon sinks before 2050, meaning that they will become carbon-negative by the time the mid-century benchmark rolls around.

According to the collective thinking behind the 2050 target, it means the likes of the Czech Republic, Estonia and Poland could all delay their own net-zero goals until after 2050, as countries with more advanced climate policies create a de facto carbon budget.

That would necessitate some more serious number-crunching by the Commission, although officials at the EU executive’s climate directorate have suggested it is a modelling exercise the department is capable of producing.

The Commission’s climate action directorate (DG CLIMA) would need data from the member states to run the numbers though, in the form of long-term climate strategies. Governments were supposed to submit those plans by 1 January but only 10 had done so as of last week.

But the ‘team effort’ school of thought was cast into doubt after the December summit and several diplomats contacted by EURACTIV have confirmed that the nature of the 2050 goal is now more vague than before.

Michel’s budget compromise suggests that the Council is leaning towards a strategy that will obligate every country to be net-zero by 2050, as its language on the Just Transition Fund mentions “a national objective of climate neutrality by 2050” rather than an “EU-wide” target.

More clarity will be provided on 4 March when the Commission debuts its Climate Law, which is designed to enshrine the net-zero target in EU law, as well as the emissions-cutting trajectory needed to reach it.

The law is widely expected to include an increase to the bloc’s existing 2030 target from 40% emissions cuts to 55% but a 2040 benchmark might also be bolted on to the legislative initiative.

After the Commission has published the Climate Law, the European Parliament and Council will both have to set their own negotiating positions before trilateral talks begin. As the issue is in the sphere of environment policy, qualified majority voting will apply.