The company of businessman Alexander Kurpetko, who worked for the oligarch Rinat Akhmetov, are engaged in illegal coal supplies, hiding behind international traders. The journalists found out about this after investigating the fuel supply scheme to Ukraine.

The key players in the heat generation market of Ukraine, which accounts for up to 30% of the energy produced, are three companies: Rinat Akhmetov’s DTEK, Maxim Efimov and Eduard Bondarenko’s Donbasenergo, and the state-owned Centrenergo.

For a stable passage of the heating season, PJSC Centrenergo needs 3.5 million tons of coal. As Vladimir Galushchak, a member of the directorate, stated at the beginning of the season, 2 million tons should be supplied by state mines, and the rest will have to be imported. For this purpose, last summer we [PJSC Centrenergo] signed contracts for the import of coal from Poland and the USA through the international trader Trafigura. The sum of these contracts amounted to UAH 1.5 billion! DTEK also uses the services of a trader, which needs to import about 1 million tons of coal.

Cooperation between Rinat Akhmetov and the state is so close here that they divided the first batch of 75 thousand tons of coal bought by a trader from the USA in half. Purchases continue, ships with coal go to Ukraine regularly.

In addition to coal, there is another link between DTEK, Centrenergo and Trafigura – Alexander Kurpetko, who previously managed coal purchases for Akhmetov’s Metinvest Holding. Before that, he was responsible for this in the Donetskstal association, and now he is the representative of Trafigura in Ukraine. Back in 2019, in parallel with his main work, Kurpitko founded the firm Azurit DWC-LLC, which is also engaged in trading in the coal market. The company was prudently registered in Dubai, UAE, in the “free zone”. Working at Metinvest Holding, Alexander Kurpetko was actually engaged in his own business. To what extent Azurit DWC-LLC is used by Kurpetko in the procurement of coal by Trafigura for Centrenergo now is not reliably known. However, according to unconfirmed information, “kickbacks” received by Kurpetko and his superior Sergey Chernovolenko from Trafigura clients are accumulating here.

It turned out that there are three other firms that are also engaged in coal trading. Thus, it turns out that, using the Trafigura trademark and connections, Kurpetko runs his own coal business. His main partner in Ukraine is Dmitry Kovalenko, an “old-timer of the coal market” of the country.

Actually, in fact, there are more firms, but it is reliably known about three companies of these partners: Coaltraydindustry LLC, Intercoaltrading LLC and Terracone Sp. z o.o. (Poland), concerning which there are documentary confirmations on coal purchases.

The Severodonetsk Coaltreydindustry is registered to the front founder Evgeny Klimenko. 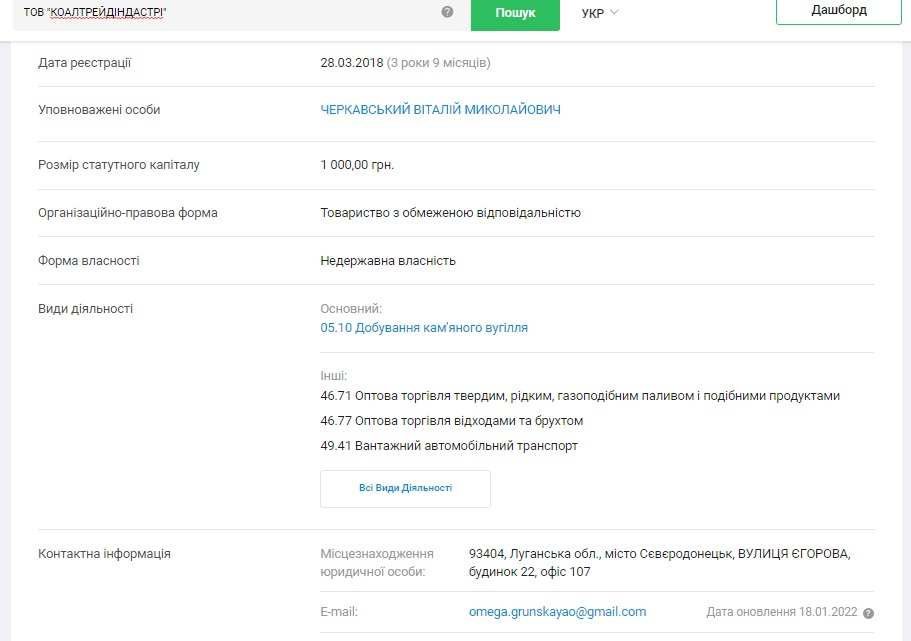 This company, like a number of other Ukrainian and foreign companies, is part of the orbit of Dmitry Kovalenko, a native of Donbass, who, with the help of corrupt Russian and Ukrainian officials, supplies coal to Ukraine under the “interrupted transit” scheme

Here are the names of several of Kovalenko’s companies involved now or in the past in his schemes:

All the companies are registered to authorized persons and in fact belong to Dmitry Kovalenko. Exports are processed to Moldova, Poland, Romania, Spain and Switzerland, but in fact all wagons are unloaded in Ukraine. Here is an example of the activity of Coaltreydindustry LLC: 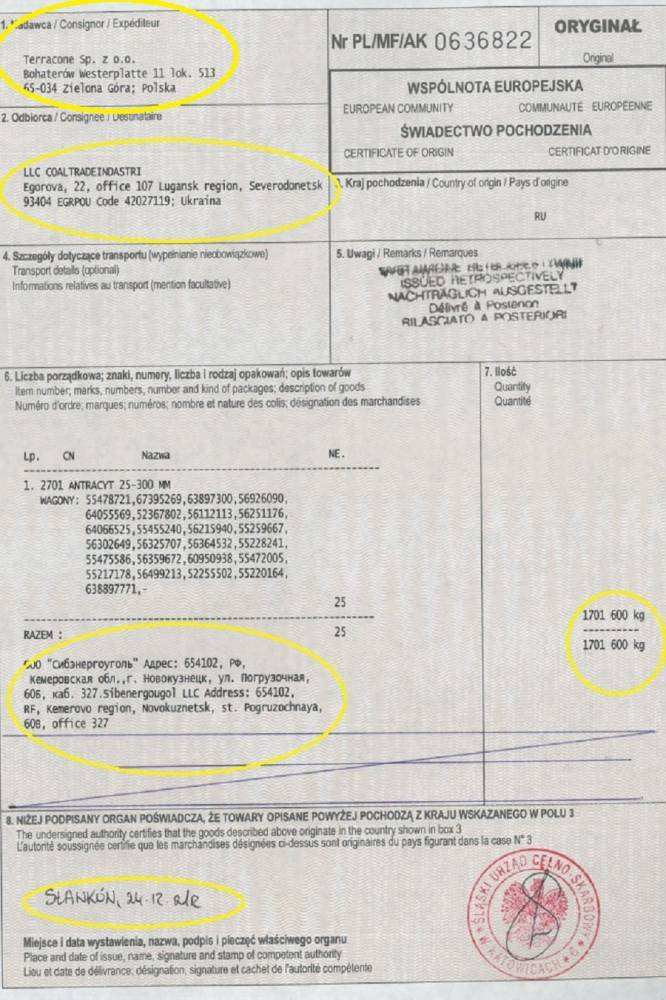 25 coal wagons weighing 1,701 tons 600 kg were allegedly delivered by the Polish Terracone Sp. z o.o. to the Ukrainian Coaltraydindustry LLC. The origin of coal at the same time is Novokuznetsk. This delivery is not an isolated one. Almost 680 tons of coal “left” Poland for Ukraine in the same way on January 1, 2022. The country of origin is Russia. In both cases, the buyer is LLC “Intercoaltrading” from Dnipro. 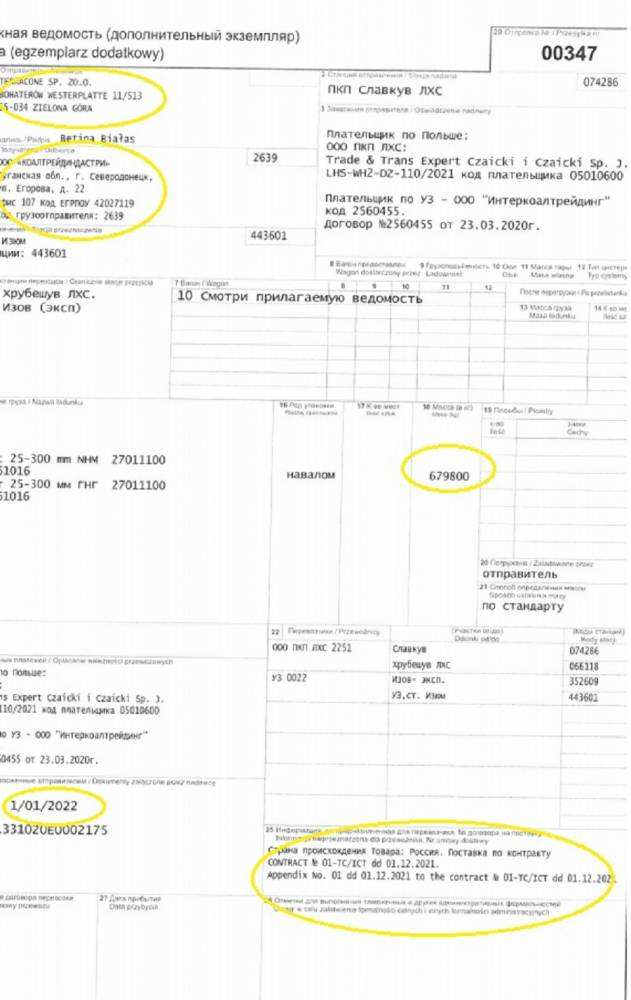 It is in this city that all offices and employees of Kovalenko have their actual location.

This LLC is also included in the orbit of Dmitry Kovalenko, the director and founder are the same figureheads as in the previous case. But what is this Terraco Sp. z o.o., which supplies coal from Poland to various Ukrainian companies with similar names? Here is an excerpt from the registry. 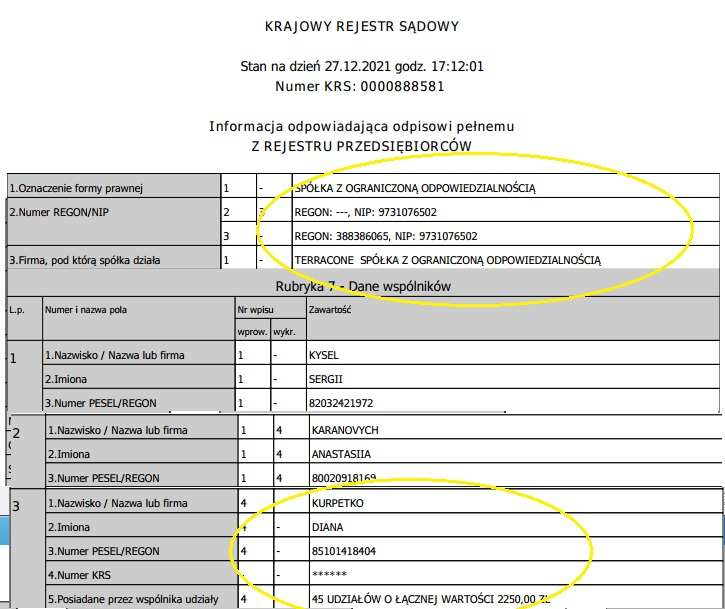 As of December 27, 2021, the founders of Terraco Sp. z o.o. were three people: Sergey Kisel, Anastasia Karanovich and Diana Kurpetko. It’s a familiar name, isn’t it? It can also be found in Ukrainian registries.

The coincidence is not accidental, Diana Kurpetko is the wife of Alexander Kurpetko and in 2021 decided to follow in her husband’s footsteps by registering as an entrepreneur.

Judging by the QED – “Consulting on commercial activities and management” and by the fact that she is the co-founder of Terracone Sp. z o.o., which supplies coal, it can be assumed that Diana Kurpetko decided to become an independent consultant on the coal market of Ukraine.

However, let’s return directly to Alexander Kurpetko. As already mentioned, he is very adept at using the name and reputation of the employer to his advantage. So it was with Metinvest and Donetskstal, and so it is with Trafigura.
In principle, there would be nothing terrible – these are private firms, let their owners deal with it. If it is acceptable for them that part of the money goes into the pockets of an employee, then this is their decision. But there is one “but”, and it is very significant.

Every citizen of Ukraine will pay for the coal that Kurpetko sells. Because it uses generated electricity. And in the case of Centrenergo, the fee will be double. And part of this coal was supplied to her by Kurpetko, who, according to our information, has close friendly relations with Shavlokhov Zaur, responsible for coal purchases at DTEK, who acted as an intermediary between the state-owned Centrenergo and Trafigura trader.

Recall that the more firms involved in the supply chain, the more expensive the final product costs the consumer in the end. The final product in our case is electricity, for the production of which coal is used. But various schemers, such as Dmitry Kovalenko and Alexander Kurpetko, pass this coal through the chain of their firms, each of which winds up its margin. This margin eventually settles in the pockets of the authors of the scheme, but ordinary Ukrainians have to pay this money. Which continue to overpay for coal and electricity. At the same time, the coal that travels under this scheme is mined by the “DNR”. Knowing Dmitry Kovalenko’s connections in Russia and Ukraine, in law enforcement agencies, he could organize this scheme. And in Ukraine, no one will check it.