Skip to content
You are here
Home > Culture > “Art robbery of the century” the inspiration for the creation of a new film, but the facts are much more convincing than fiction. 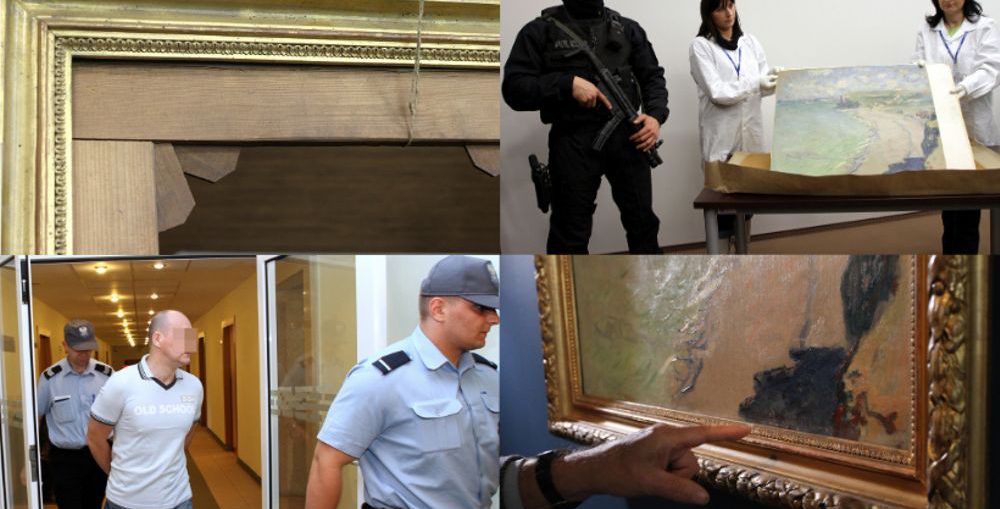 This unusual regulation has been in place ever since a quiet Sunday afternoon in 2000 when a young art student sat quietly sketching a painting alongside the gallery’s pride and joy, Monet’s Beach in Pourville.

Each time Lucyna, the attendant on duty that afternoon, left the area, the student would spring from his seat and cut a few centimetres of the impressionist master’s canvas away from its frame.

The art thief had cut the Monet out of its frame whilst pretending to sketch it. Muzeum Narodowe w Poznaniu

When he heard the increasingly loud clickety-clack of her heels on the hardwood floor, it was his signal to return to his stool and resume his cover.

After several rounds of this dance, the thief had managed to cut away the whole canvas, which he replaced with a copy prepared earlier.

Though rough and amateurish, it was enough to hoodwink unsuspecting gallery staff. The thief bid Lucyna farewell and walked out with the seven-million-euro masterpiece and the only Monet in Poland under his jacket. 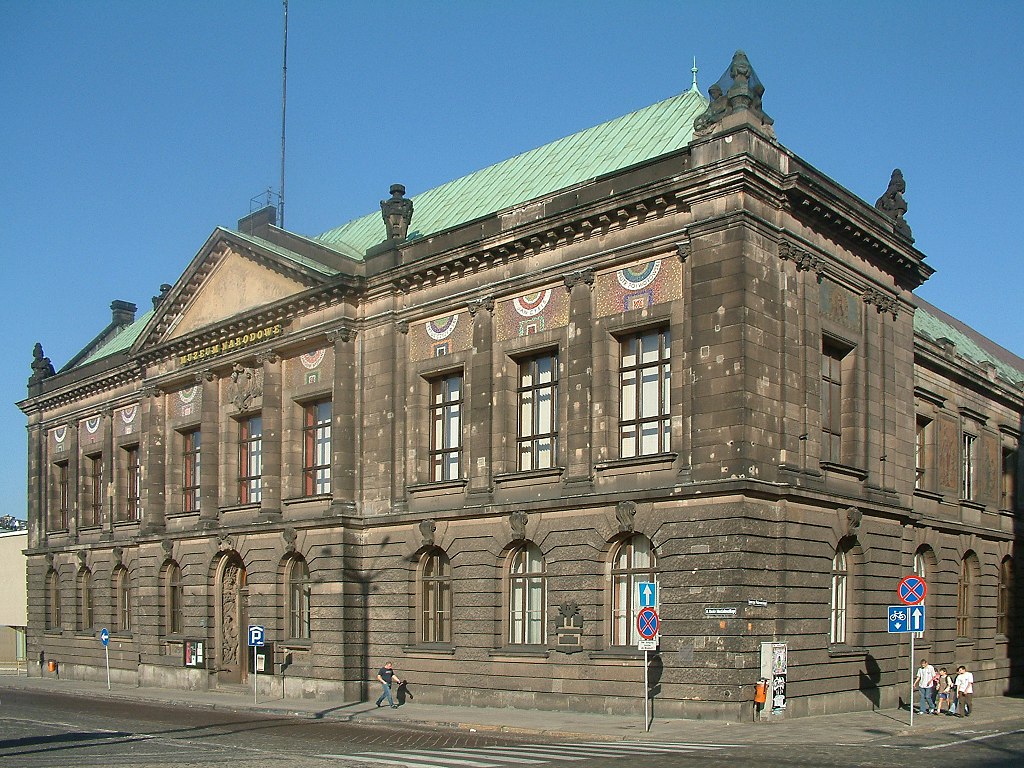 Suspicion immediately fell upon staff the Poznań’s National Museum where the painting had been on display. CC BY-SA 3.0

This almost perfect crime, which has been described as the art heist of the century, is the inspiration for a new film which has just been released in the country’s cinemas.

The plot of teen detective romp ‘Tarapaty 2’ kicks off when Claude Monet’s painting Beach in Pourville from 1882 is stolen from the National Museum in Poznan.

However, the plot veers away from fact when the film’s young detectives and their dog go off on their own make-believe search for the painting. The true story of the theft, however, is perhaps more compelling and incredible than the big screen version. 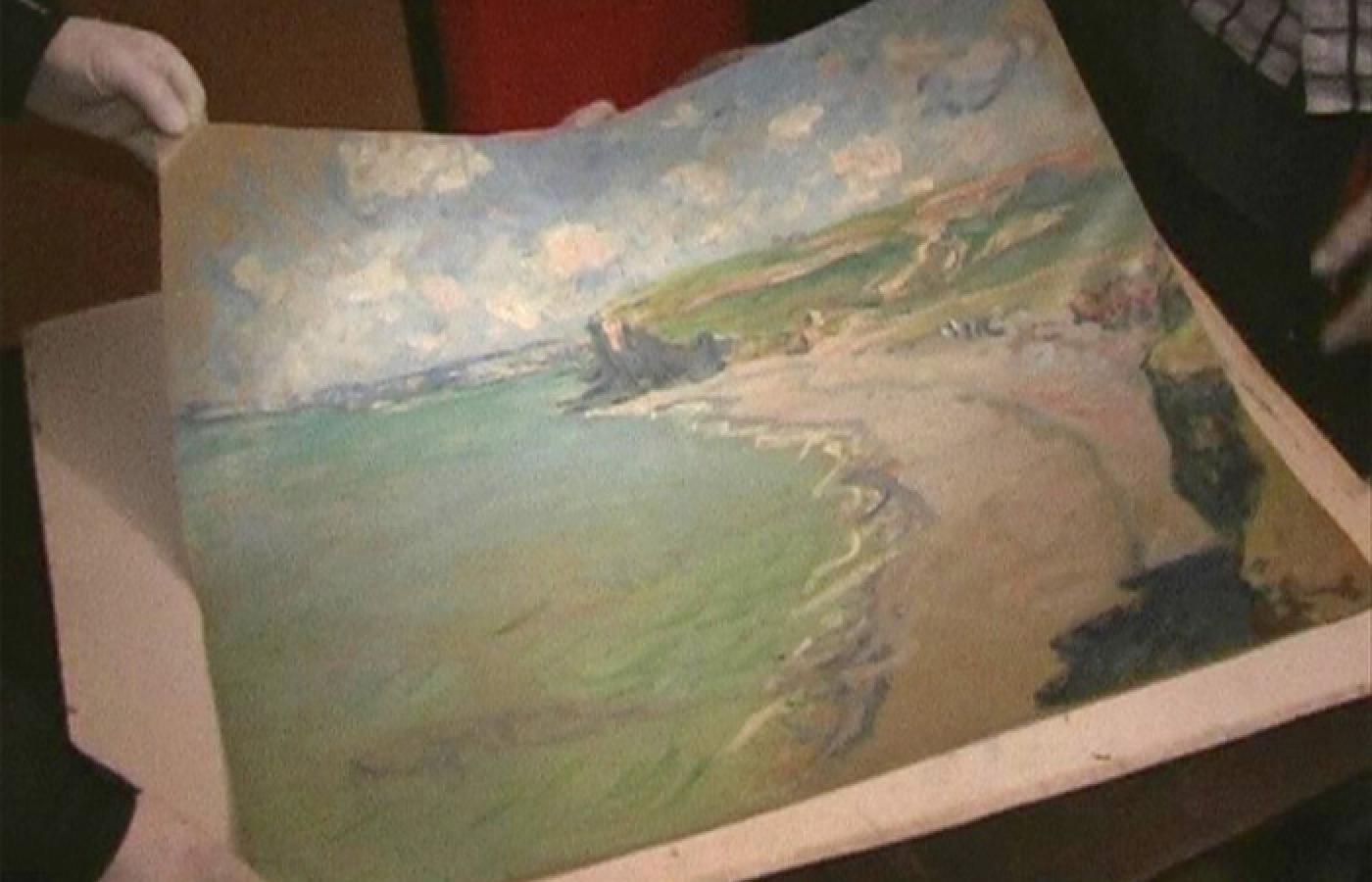 The thief hid the painting in a wardrobe at this parents’ apartment 430km away in the town of Olkusz. Poznań Regional Police Headquarters

Inspired by Pierce Brosnan in the hit film The Thomas Crown Affair, the thief would remain at large for ten years until police eventually tracked him down.

The theft came to light on Tuesday 19 April 2000, when Lucyna was doing her early morning rounds. With horror, she noticed that Monet’s Beach in Pourville was peeling away from its frame and seemed to have lost some of its colour.

She immediately summoned museum director Piotr Michałowski, who on seeing it realised straightaway that it was not the real Monet but a poor copy. 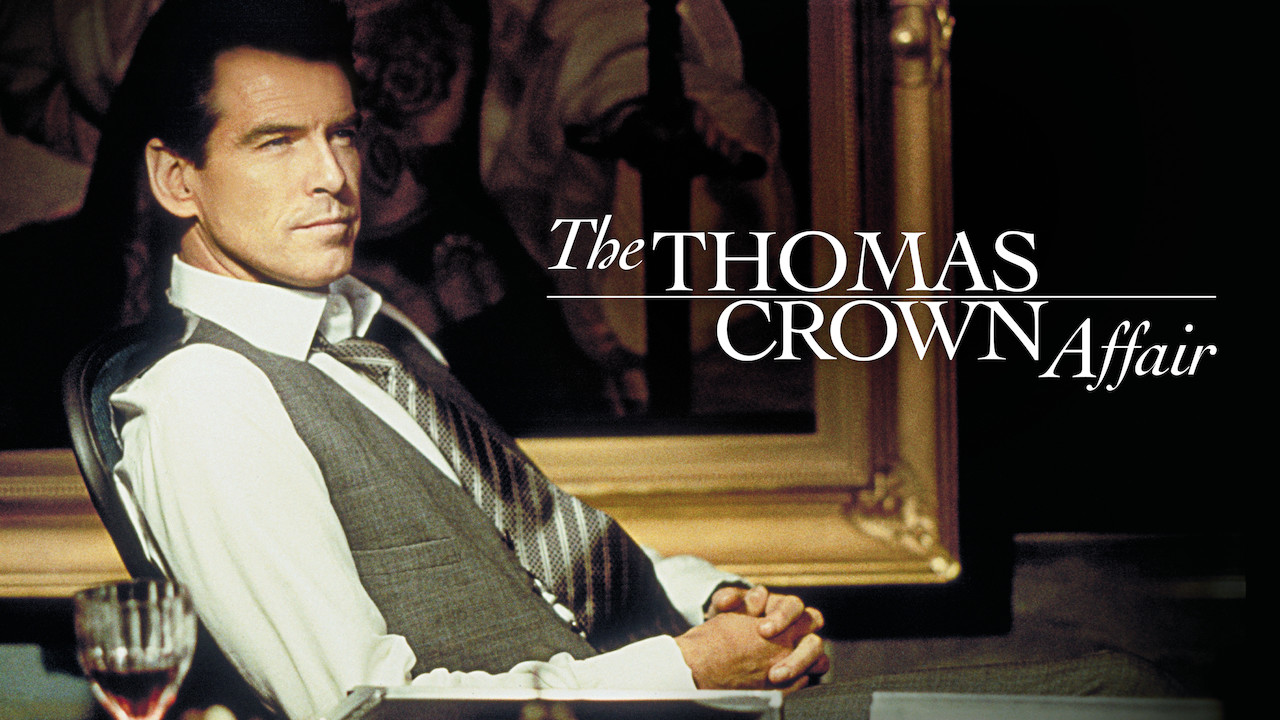 The thief had been inspired by the 1999 film The Thomas Crown affair starring Pierce Brosnan as a bored billionaire who decides to entertain himself by stealing a Monet from a reputed museum.Press materials

Police were soon crawling over the museum. The fingerprints that they took from the frame would turn out to be key years later.

The crime baffled police. The thief had cut away the original from inside the frame with a sharp tool and replaced it with a copy.

It didn’t fit with the idea that it had been stolen to order. A rich but unscrupulous collector who wanted to acquire a Monet would not agree to buy a damaged work. 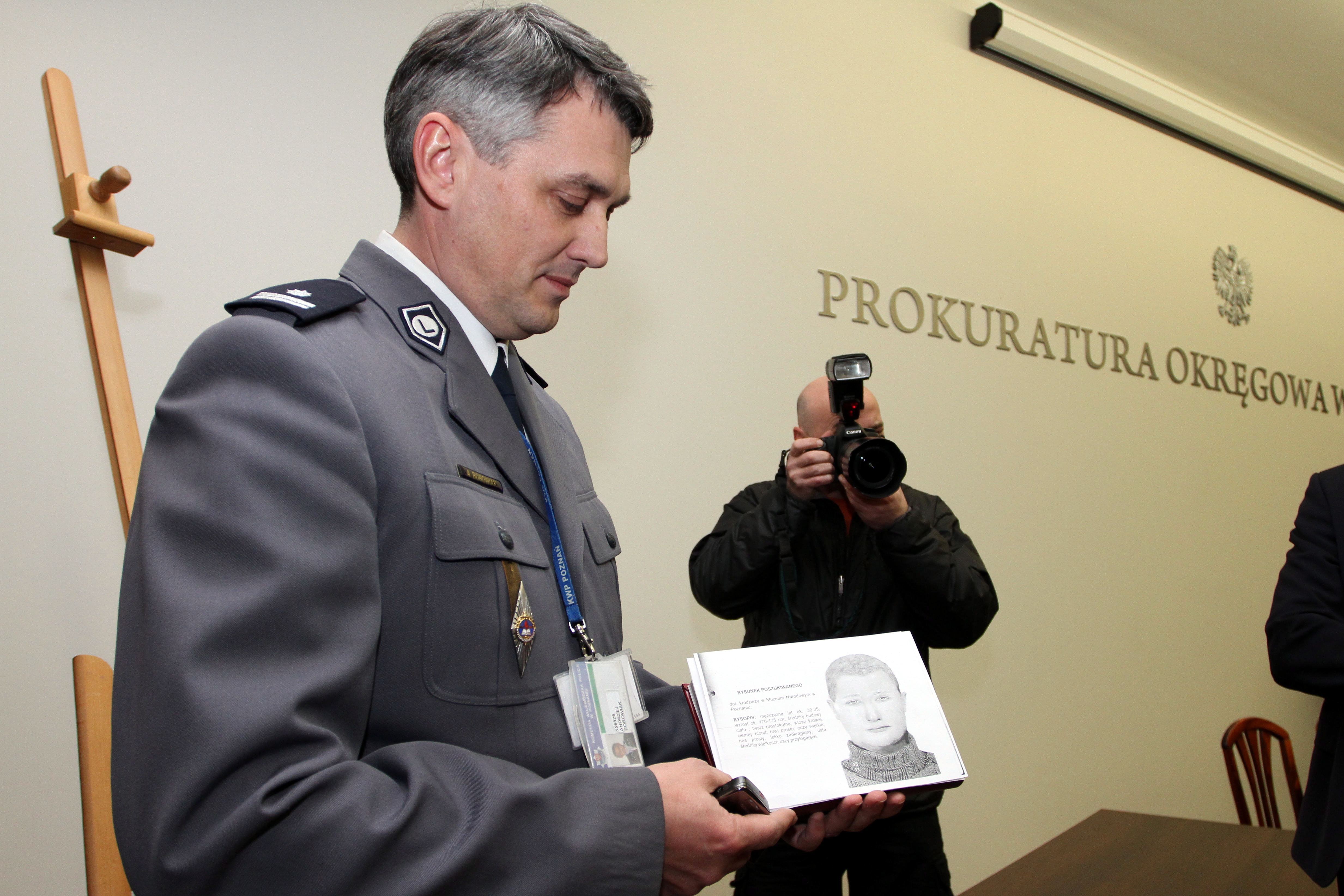 The man who had stolen the Monet was a fictional art student who called himself Jacek Walewski.Adam Ciereszko/PAP

Suspicion first fell on two security guards who shortly before the theft had come to the museum looking for work. They were even guided through the halls, including the one where the painting hung.

When the police found them, they explained that they hadn’t accepted the work because they were not from Poznan, they would have to commute, and the wages offered were too low.

Suspicion naturally fell on the museum staff. The thief must have had time to cut out the original and replace it with a copy while not drawing attention to himself, so inside involvement was suspected. However, they couldn’t pin the crime on any of them. 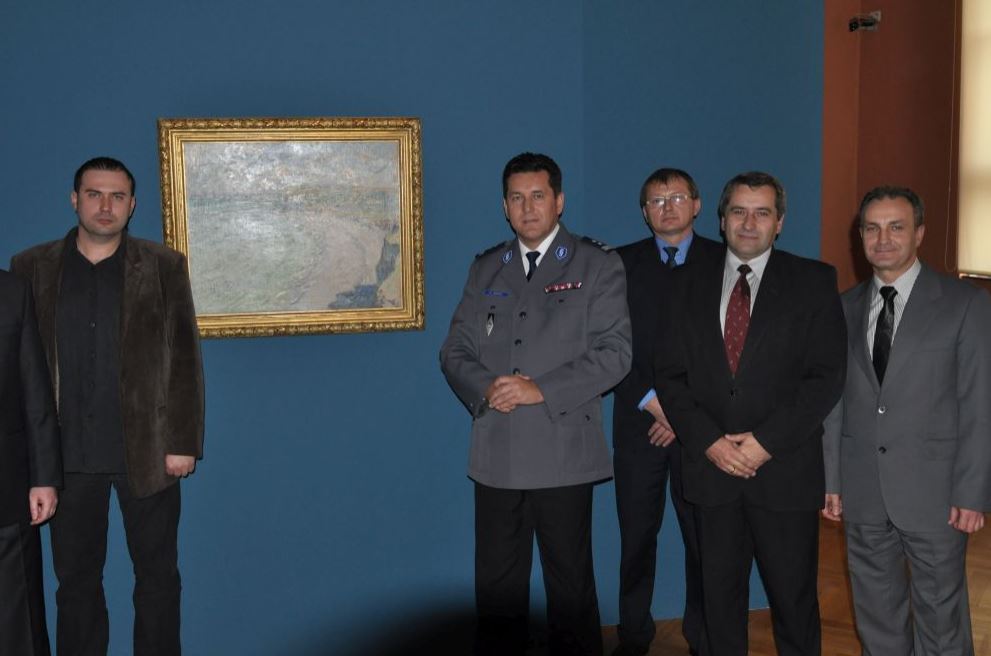 The thief was eventually tracked down by forensic cop Marek Pawlicki, pictured in a blue shirt, 3rd from left.Poznań Regional Police Headquarters

Museum staff finally remembered that a young man had spent several hours on the Sunday before the discovery of the theft sitting in front of a neighbouring painting making sketches. They had found the thief, but identifying him would take 10 years.

Sometime before, the thief had sent a fax to the museum signing himself as the fictional art student Jacek Walewski.

He wrote: “I kindly request permission to make a sketch on cardboard of a selected artist in the museum. I must point out that this is not about copying, but capturing the style that the artist used in the work”.

The student explained that he was applying for membership in the Krakow branch of the Association of Polish Artists and Designers, and that he needed a sketch in order to make his own interpretation of the painting, which would then be evaluated by the qualifying committee. The museum agreed. 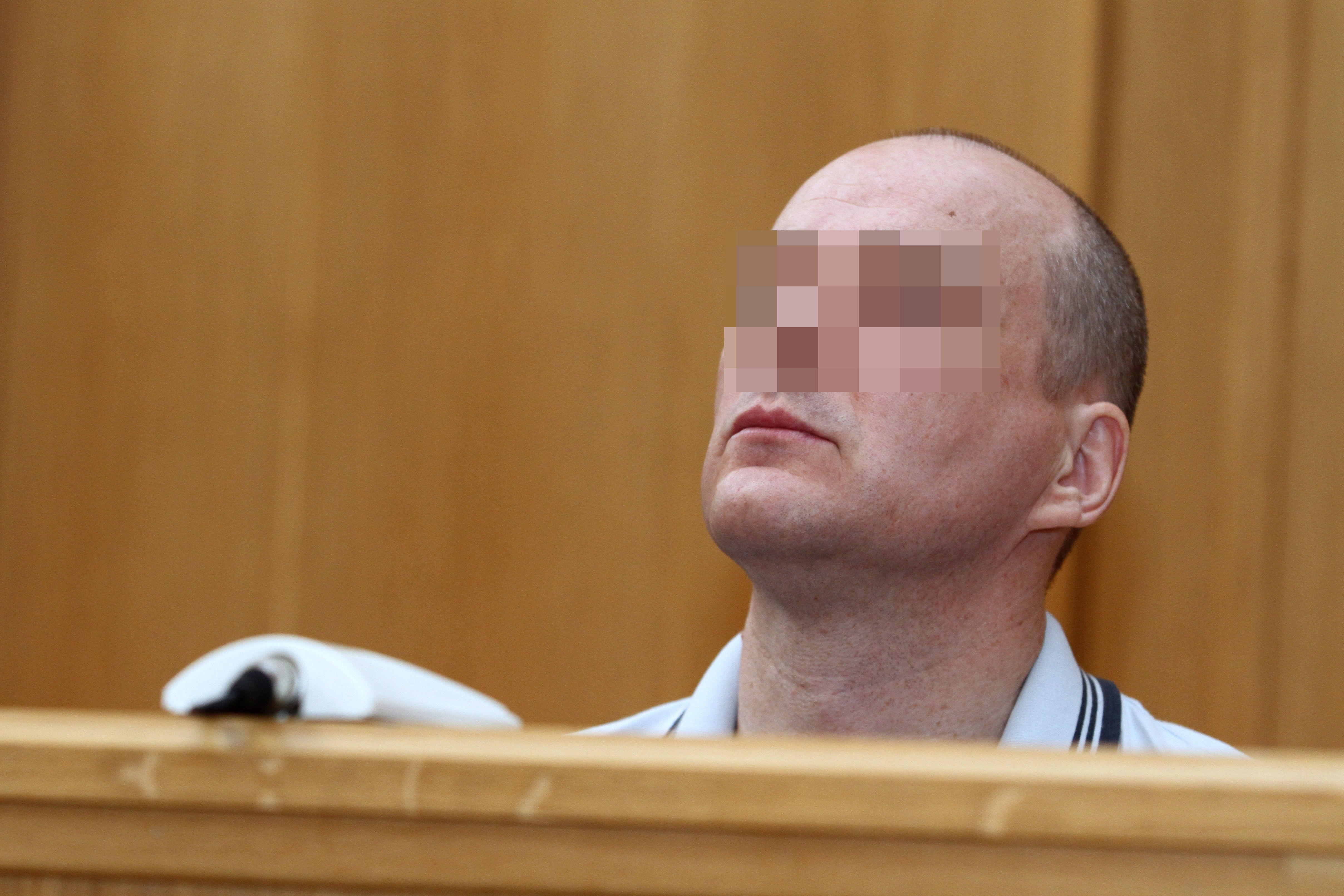 The crook told the court in Poznań that he had stolen the painting not for profit, but out of love for art, adding that he wanted it so that he could look at it occasionally when he was by himself.Adam Ciereszko/PAP

The crime mastermind turned out to be an itinerant painter and decorator from Olkusz, a lonely drifter who stole the painting not for profit, but out of love for art, or perhaps a need for art. He said that he stole it just so that he could look at it occasionally when he was by himself.

Unable to hold down a regular job, in the 1980s he ended up in Paris where he worked as a room painter. In his spare time he visited museums, where he fell in love with art, especially the Impressionists.

On returning to Poland, art left his life. He became a father, looked for work, found it and lost it again. He argued with his wife, and after seven years he was divorced. He escaped into the world of books, art history in particular.

He would sit for hours in the library and deepen his knowledge. One day he made an extraordinary discovery. He read that one of Claude Monet’s paintings was in the National Museum in Poznań. He set off immediately to see for himself. 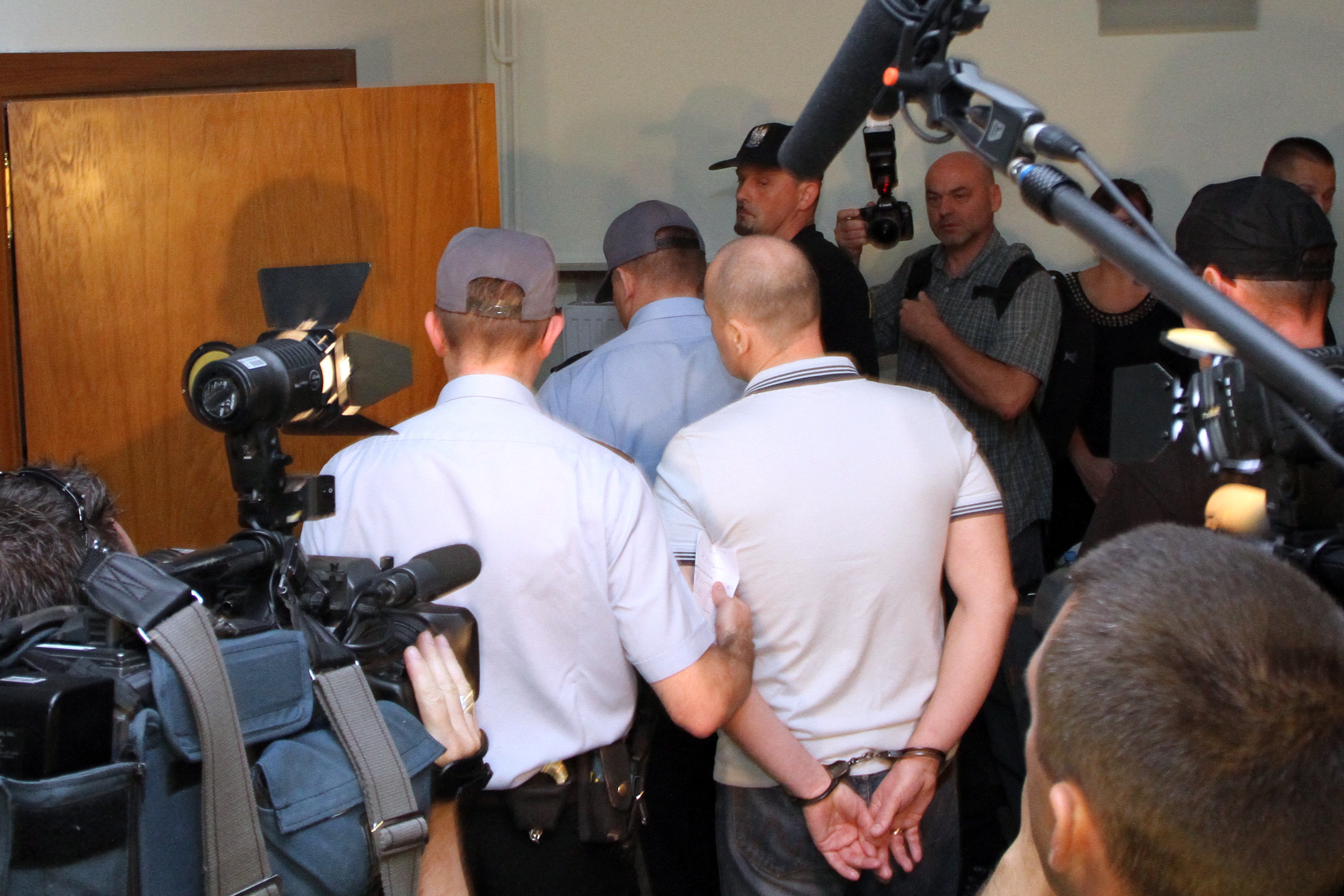 After being found guilty, the man was sentenced to three years in jail, but only served one before being released. Adam Ciereszko/PAP

Mesmerised by what he saw in Poznań, a crazy desire to possess the work overcame him. The feelings that had taken root in him in Paris saturated his soul and gave him no peace. Looking at the photograph he had taken in Poznań was just not enough.

Having stolen it, he got no joy from the painting. Terrified by the noise the theft had created in the media and the police investigation, he hid it behind a wardrobe at his parent’s home and never took it out.

One time, he even went to Poznań to give himself up. He stood outside the police station fully intending to enter and reveal himself, but he got scared and went home.

The identity of the thief may never have been discovered if it wasn’t for Marek Pawlicki, a specialist from the police forensic laboratory in Poznań. He was the one who collected fingerprints in the museum after the theft and then entered them into the computer database. 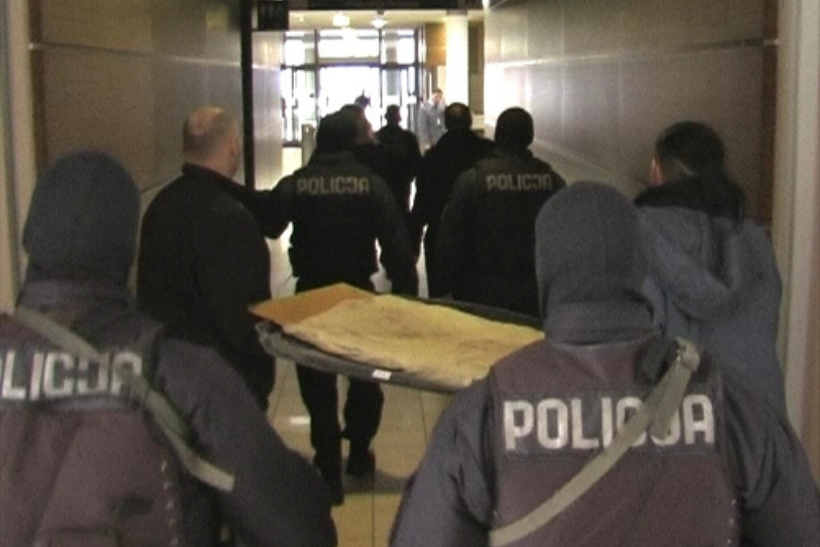 The painting being returned to the museum.Poznań Regional Police Headquarters

From time to time Pawlicki would check the database for fingerprints for a match with those from the museum, But for years the computer said no.

The breakthrough came nine years after the theft when the police computer found a match with the prints of the then 41-year-old.

Zwoliński had his prints taken because he had not been paying alimony and had threatened a security guard in a shop.

When the police knocked on his door, they saw relief on his face. He was happy that the whole affair was over. 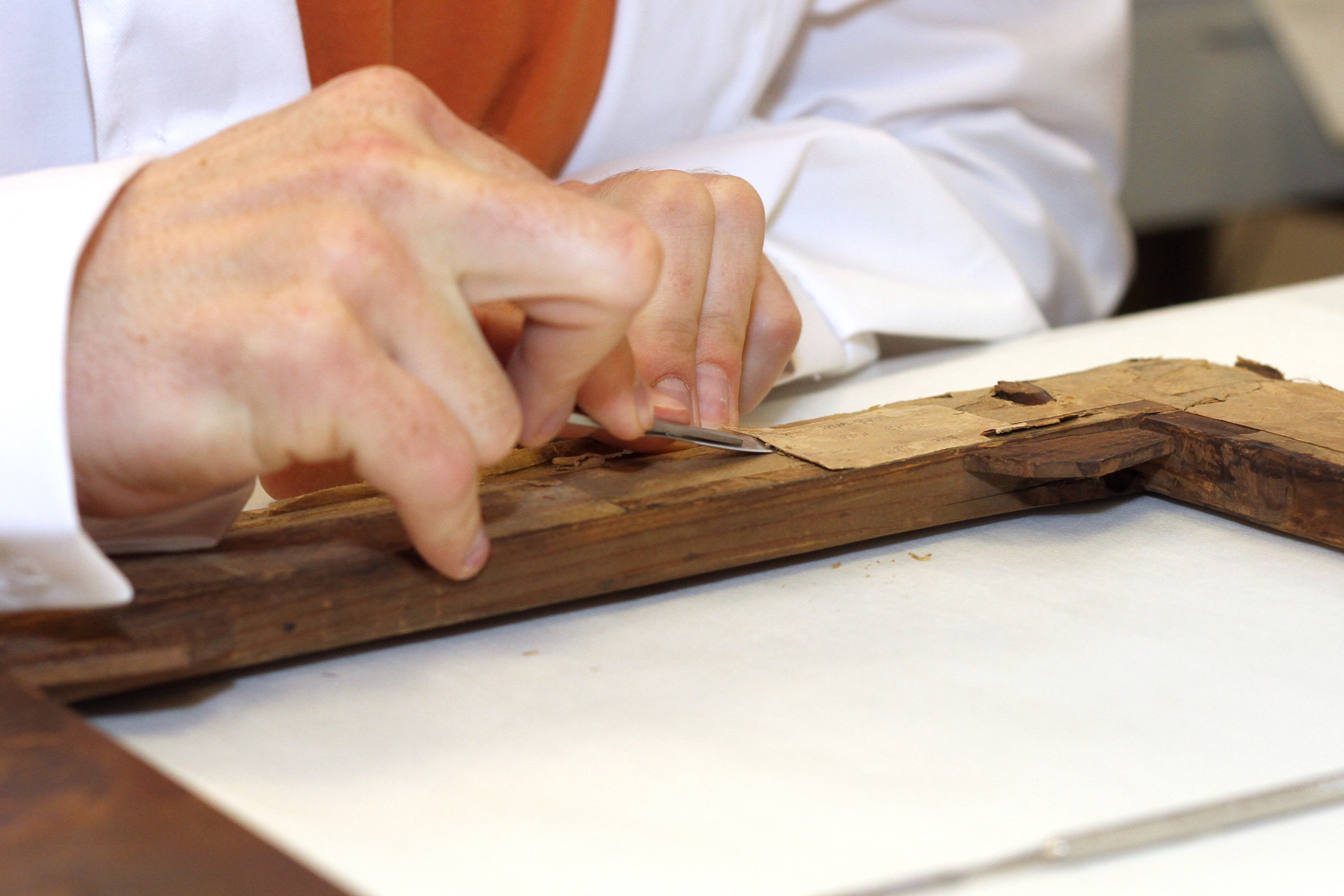 After the painting was returned conservators managed to join the cut canvas with the scraps that remained in the frame.Adam Ciereszko/PAP 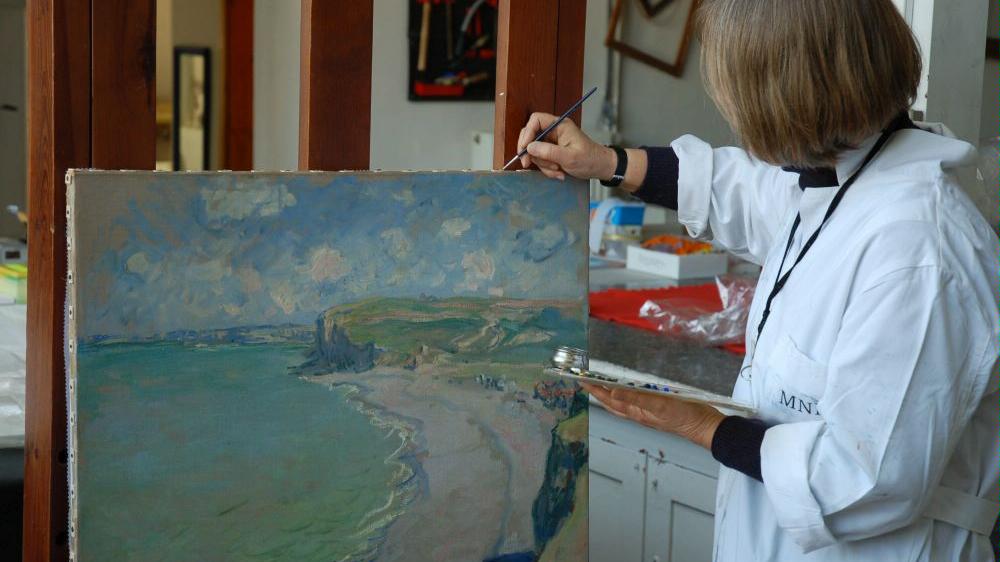 Zwoliński was tried in 2010. The court only sat for a few hours before it found him guilty.

Judge Mariusz Sygrela said: “You have made your mark in the world’s history of art theft. You showed exceptional determination and nerve to cut out a painting for so many hours in front of staff. They should have caught you red handed.”

But he added: “The court wonders what your motivation was. You wanted to be alone with art, but you took this opportunity away from other art lovers. And then not once did you ever take the painting out of hiding.”

In sentencing, the judge took into account Zwoliński’s remorse, and his cooperation with investigators. 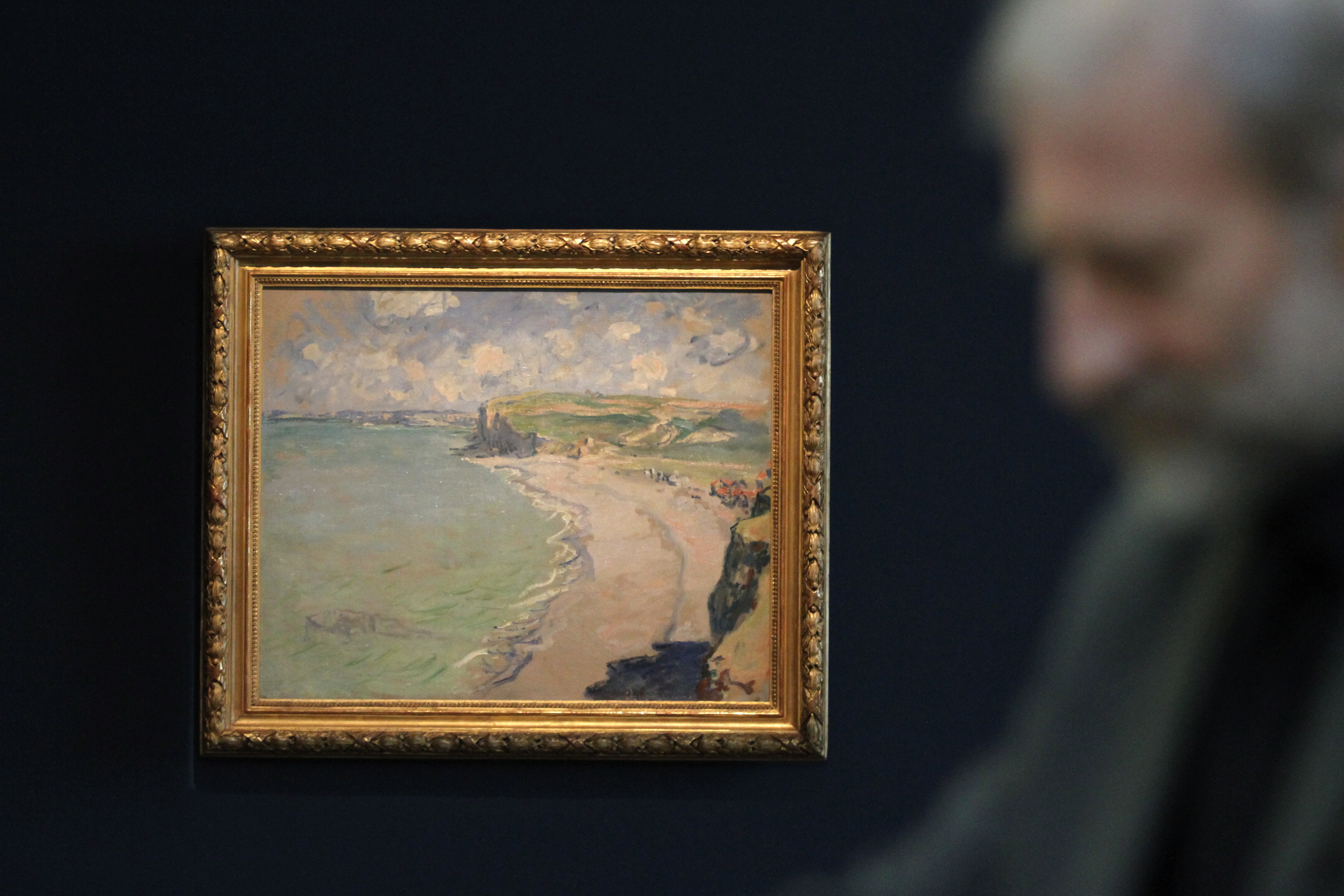 The painting is now back on display at the museum. Adam Ciereszko/PAP

When he was arrested, the police searched his parents’ house, but did not find the painting. If he had not told them where it was, they may never have found it.

He faced up to 10 years in prison, but considering all the circumstances the judge gave him three years, of which he served only one.

After the painting was returned to the Poznań museum, conservators managed to join the cut canvas with the scraps that remained in the frame. They stitched it back together millimetre by millimetre so that now even the signature that was cut is now completely legible.

Now that the painting is back, it is not going anywhere. Museum bosses have taken the strict line that it will never leave its home ever again.