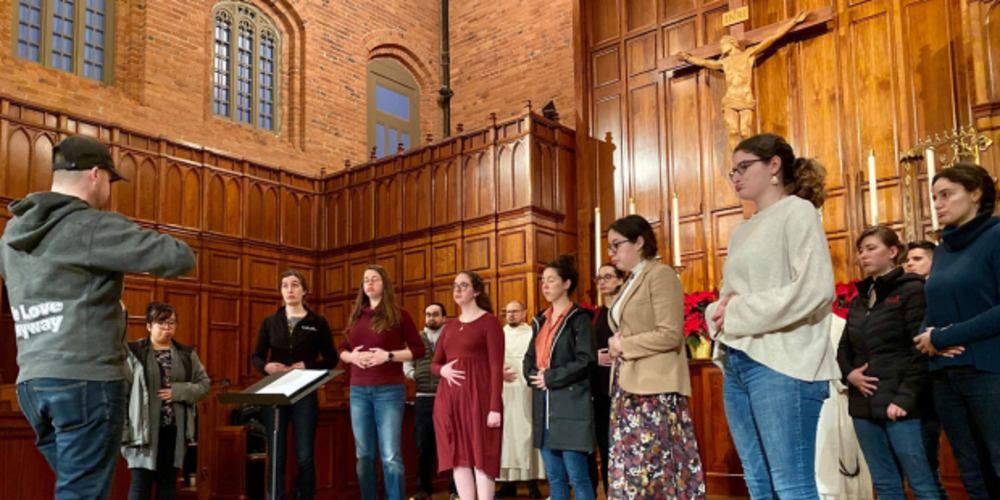 The Dominican Liturgical Center in Kraków was established in the 1990s with the goal of creating new church music that brings back the stylistic traditions established by the Byzantine and Orthodox composers of yore. For nearly 30 years they have been working towards their mission and their efforts have produced more than 1,000 new pieces along the way.
By the turn of the century, the Polish Dominicans brought their repertoire to America, and for the last two decades they’ve been using their body of work, along with their musical know-how, to educate various campus ministries and parishes across the nation. The music, now translated into English, has proven to be an invaluable source of religious inspiration that draws the listener closer to the ancient liturgical prayers.

Now, the Dominicans have produced and recorded two albums of these English translations, both of which they hope to release in February of 2020. Once complete, they intend to release the audio files and scores for free use by parishes all over the English-speaking world.

Liturgia.pl conducted an interview with the artistic director of the recording project, Christopher Mueller, who explained that both albums were recorded in one weekend by the group of singers who had never previously seen the music. He said of the work:

“Most of this music is antiphonal, where a short refrain is repeated several times, interspersed with Scriptural or meditative verses. This reflects the very structure of the Mass propers themselves — the antiphons at Entrance, Offertory, and Communion,” Mueller points out. “The unfamiliarity of this beautiful choral music gives us a chance to experience God anew at each liturgy.”

The sessions feature a group of non-professional singers brought in from all over the country. The Dominicans drew the singers and even sound engineers from the many schools and parishes throughout America where they have taught. The group includes high school music teachers, a doctoral candidate, a computer engineer from Microsoft and about 20 students.

While the English recordings are still being mixed and mastered, we are given an idea of what it will sound like from the Polish recordings, featured above. The music is the envy of any fan of Catholic music, as it strikes an interesting balance between the old-fashioned harmonic voice-parts and a more modern movement of melody.

Julie Bellefeuille, a theology student at the University of Notre Dame, traveled from Indiana to participate in the studio sessions. She also spoke with Liturgia.pl, where she expressed her deep respect for the unwavering spirituality of her music. She said:

“The harmonies do not distract from the text, but rather they draw me into a prayerful and personal encounter with the Word of God. The style is reverent and dynamic. It is not afraid to claim our Catholic tradition, but also freely creates something new that corresponds to a world longing for its Redeemer.”

The English recordings are expected to drop in February, after which time the sheet music will be available to use in any Catholic service. In just a few short months, the most beautiful modern liturgy may be coming to a church near you.