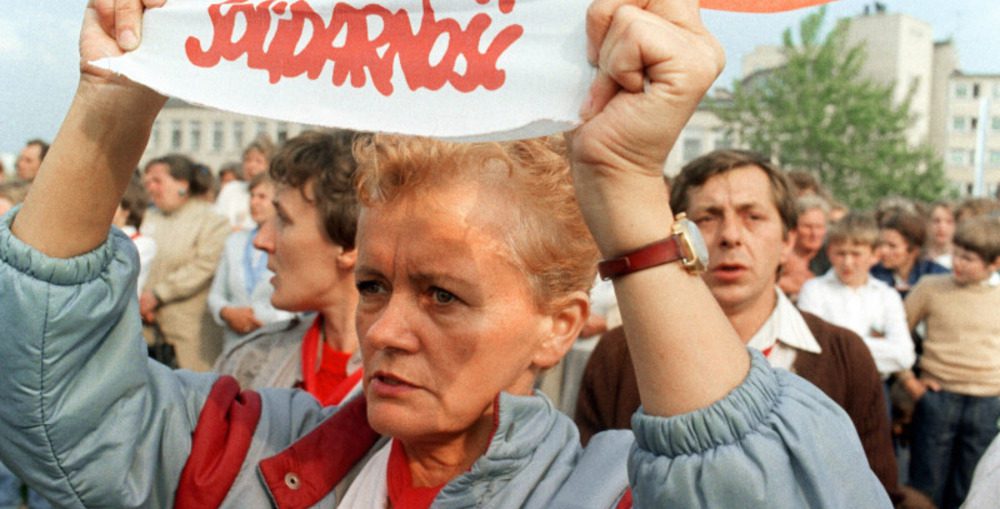 When U.S. President Donald Trump travels to Poland at the end of August to mark the 80th anniversary of the start of World War II, he will become a player in another war—this one for historical truth.

Since Law and Justice came to federal power in 2015, the party has sought not only to manage Poland’s present and future but to recast the nation’s past, especially regarding World War II and the struggle to end Soviet rule.

The party’s narrative is a simple one: Polish heroism, Polish particularism, anti-universalism, and an autocratic populism ruled the day. A ground-up desire for democracy played no role. To that end, it has sought to de-emphasize the contributions of Solidarnosc—or Solidarity, a trade union and social movement that, under future President Lech Walesa, pushed the communist government to hold democratic elections in 1989 for the first time since World War II—by claiming that a nationalist right-wing movement was actually more important to bringing democracy to Poland.

In addition, Law and Justice has used its control of public media to play up the story of Polish resistance to the Nazis, especially the Poles’ last-ditch effort to take on the Germans in 1944, which saw Warsaw nearly burned to the ground. Law and Justice’s goal is to create a nationalistic story that can supplant the (also patriotic) story of the peaceful uprising of the much later Solidarity. Part of this effort has been the institution of a celebration each summer of the 1944 uprising and a new museum that celebrates the battle.

The party has sought control of private media as well. The Warsaw-based newspaper Gazeta Wyborcza, founded by Solidarity during its fight to end Soviet control, is perpetually under strain with Law and Justice reportedly threatening private advertisers to decide between business with the government or ads in the liberal daily. Other outlets are facing the same pressure.

Law and Justice’s current focus is winning direct control of museums and memorials that mark critical times in Polish history. It has looked to memorials in Gdansk, not only home to the opening salvo of World War II but also to Solidarity. In July, Polish President Andrzej Duda expedited a federal law to expropriate the Westerplatte Peninsula, a small portion of the city of Gdansk, and, with it, the memorial to be built there commemorating the first shot of World War II, which was fired on Sept. 1, 1939, when German planes buzzed the peninsula.

In early August, I met with the mayor of Gdansk, Aleksandra Dulkiewicz, in her office on the top floor of a Soviet-era building on the outskirts of the old historic city, just hours after the president announced his dictate. A 40-year-old single mother, Dulkiewicz has full-time bodyguards, a consequence not only of current death threats against her (she receives at least a dozen abusive letters every day) but also due to the murder of her colleague, friend, mentor, and predecessor, Mayor Pawel Adamowicz, this past January.

Dulkiewicz is a reluctant mayor at best. “This is the job I never wanted,” she said. Her voice softened. “My election was the election I wanted never to run in.” A native of Gdansk, she was elected to the city council in 2010 as a candidate of Civic Platform, the major national liberal opposition party, and quickly became the party’s leader in the city government. For the past two years, she was deputy mayor and campaign manager during her mentor’s final run for mayor.

“We had a difficult local election last year, and I was campaign chief, as a volunteer. We were so looking forward to the next five years,” she said. After Adamowicz’s death, she continued, “I decided to run because I knew that I wanted to save the city which we took care of, so, in that sense, I had no choice. I knew I could save this idea, the way we developed our city, the way we tried to build a tolerant, open society.”

As Dulkiewicz spoke about Adamowicz and about her current fight with the ruling party, her voice cracked at times. “This is the question of the way we as a Polish people want to think of our history and how we want to commemorate important dates for us,” she reflected, understanding full well that the recent land grab was part of a bold attempt to rewrite the history of World War II.

The Polish federal government has announced no plans for what it hopes to do with its new acquisition. The common expectation, though, is that it will use the peninsula as a site for another monument to Polish nationalism, with none of the echoes of democracy and pluralism that the city of Gdansk exemplifies. “The Polish government doesn’t know what they want to build in Westerplatte,” Dulkiewicz noted. “They decided to take a special act with no dialogue with the experts on museum building, no community consultation. They just decided that this law would allow the Polish government to build wherever they wish and to take away the land owned by the city of Gdansk.”