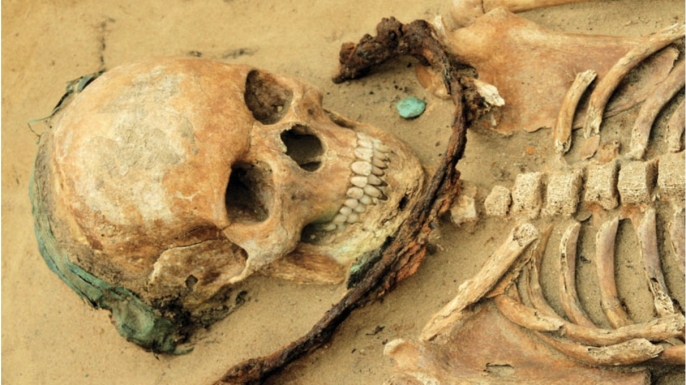 A newly published study dismisses a theory that five bodies found in a Polish cemetery with sickles placed across their throats and hips were “vampire” burials. Instead, the authors argue the unusual burial practice was “anti-demonic” and done not necessarily to protect the living, but the deceased, from evil spirits.

Since 2008, archaeologists have been excavating a 400-year-old cemetery on a sandy hill in northwest Poland near the rural village of Drawsko. More than 250 bodies have been unearthed so far, and they have been unremarkable with one noticeable exception—five skeletons buried with the cutting edges of iron sickles placed tightly across their throats and hips.

The sickles were discovered around the necks of two adult females who died in their thirties, an adult male who died between the ages of 35 and 44 and an adolescent female 14 to 19 years old. An adult female aged 50 to 60 years old was also found buried with a large sickle around her pelvis. Some researchers have theorized that the curved knives were placed around the skeletons out of a fear of vampirism, but a new study in the latest issue of the British journal Antiquity rejects the idea. The authors—Marek Polcyn of Canada’s Lakehead University and Elzbieta Gajda of the Muzeum Ziemi Czarnkowskiej—suggest the unusual burials are “clear evidence of anti-demonic funerary practice” and could have been done to protect the dead, as much as the living, from evil spirits.