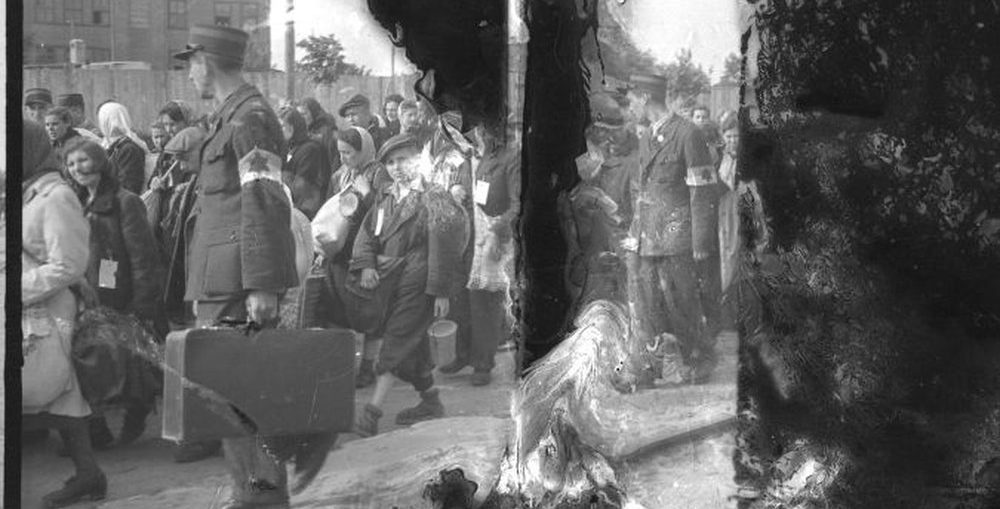 From 1940 to 1944, photographer Henryk Ross documented life inside the Lodz Ghetto in Poland. Officially, Ross worked for the ghetto’s Jewish Administration’s Statistics department, photographing the Jewish ghetto’s inhabitants for identification cards and for propaganda images to be used by the Nazis. When Ross was not working in his bureaucratic capacity however, he risked his life to photograph the reality of daily life in the ghetto, Forward reports.

The Lodz Ghetto was, after the Warsaw Ghetto, the second largest ghetto in Nazi occupied Europe, and was a major source of slave labor throughout the war. The ghetto was also one of the main waypoints on the route to Chelmno, the Nazi’s first extermination camp, located just 31 miles outside Lodz. From the Ghetto’s creation in 1939 to its liquidation in 1944, around 204,000 Jews lived in the Lodz Ghetto, but only 877 remained hidden in the ghetto by the time of the Soviet liberation in 1945.

Prior to the liquidation of the ghetto in 1944 via the death camps of Chelmno and Auschwitz, Ross was able to bury the roughly 6000 negatives he had taken, hoping to one day recover his historical record. After the war, Ross returned to discover that over 3000 of the negatives had survived.

And when Ross exhumed those negatives, it was as if he was exhuming the dead. The photographs, which, with the help of the Museum of Fine Arts Boston and Art Gallery of Ontario, will go on display at the Museum of Fine Arts Boston on March 25th for the exhibition “Memory Unearthed: The Lodz Ghetto Photographs of Henryk Ross,” are some of the most poignant documentary evidence of life in the ghettos. When we also consider the incredible danger and stress of creating them, Ross’s already admirable sense of composition and poise turn from heroic to miraculous. For these are not only incredible documents, they are unparalleled as photographs.

Two images in particular stand out (from the press materials, at least – we have yet to see the full depth of Ross’s extraordinary work). The first, an image which certainly must be considered as one of the greatest of the 20th century – “Man Walking In Winter In The Ruins Of The Synagogue On Wolborska Street.” The image shows the ruins of the synagogue rising up out of the thick, deep snow. It would be difficult to tell what had been ruined were it not for the large, conspicuous Star of David on the largest fragment of the building. Trekking through the snow is a man in a dark coat, framed by the ruins. He not only provides scale for the ruined fragments, but shows the dispossessed human presence that haunts all ruins. The image is almost unbearably mournful, even without the historical context. Considered within its historical context, we might see the snow as representing the shroud of history, the forgetfulness that comes with time (a forgetfulness combatted by the photograph’s very existence). The overwhelming grayness of the photograph might also cause us consider the snow not as snow, but as ash – a likeness all too appropriate, and all too terrible.
Ghetto Police Escorting Residents For Deportation

The second work that stands out is a partially ruined negative entitled “Ghetto Police Escorting Residents For Deportation.” The deterioration of the negative, in this context, resembles only one thing – flames. The coincidence is, again, almost unbearable. We know what deportation means, where it goes, how it ends – all of which is contained in the negative. We see a group of people marching with their belongings, flanked by the uniformed ghetto police. The policemen look at the marchers, the marchers all look ahead – all, except one. A young boy in the center of the photograph looks directly into the camera. It’s a curious thing when someone in a larger photographic tableau looks into the camera – it reconstitutes the subjectivity of the photographed, forces us to consider them not as images, but also as humans. It establishes a rapport, and a rapport with images, that is, the always already dead (per Roland Barthes’ “Camera Lucida”), is unnerving, haunting. The boys face, as it gazes at us, is licked by the flames of the negative’s dilapidation. He looks at us, literally, from the Holocaust, which, lest we forget, has its roots in the Greek word holokauston – translating to “whole” (holo) “burn” (kaustos).

In addition to the two images discussed above, the exhibition will include (per the Museum of Fine Arts Boston press release), “hundreds of photographs, artifacts such as ghetto notices and the photographer’s own identification card, as well as footage from the 1961 trial of Nazi war criminal Adolf Eichmann where Ross’s photographs were submitted as evidence.” The press release also contains the following words from Ross, “I was anticipating the total destruction of Polish Jewry. I wanted to leave a historical record of our martyrdom.” It is to our enormous, incalculable, ineffable benefit that Ross, with his historical record, was not counted among the martyrs.