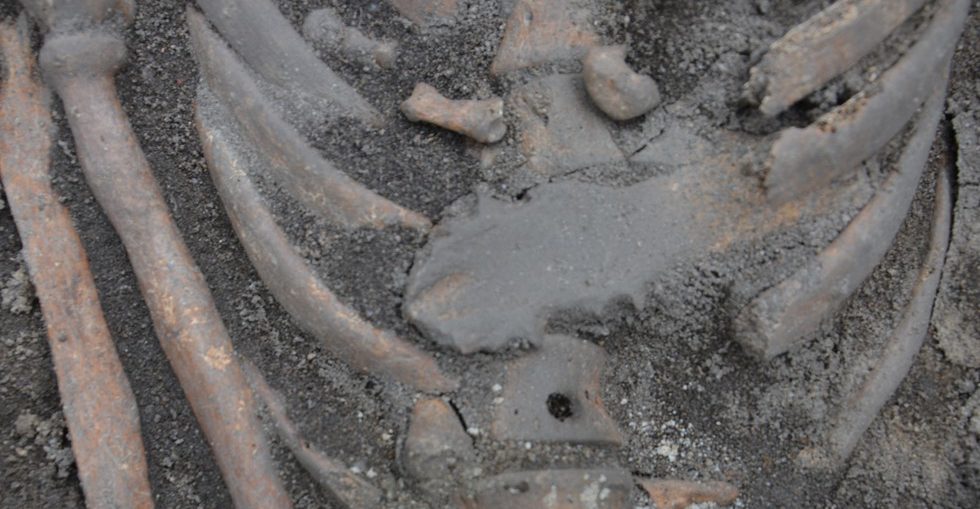 Polish archaeologists have uncovered the medieval remains of three “vampires” — individuals whose bodies were mutilated before interment to physically prevent any attempts to rise from the grave.

Dating to the 13th and 14th centuries, the deviant burials were unearthed in the village Górzyca in western Poland.

“They were found near a former bishop’s residence. A Gothic cathedral once stood somewhere near the graves,” Krzysztof Socha of the Museum of Fortress Kostrzyn in Poland, told Seeker.

Two skeletons, belonging to a woman and a man, bear the signs of various mutilations, carried out with sharp objects, The Seeker reports.

Both skeletons had holes in the spine, most likely from someone nailing the bodies into the ground.

Buried face down — a treatment aimed to impede the individual from rising from the grave — with her knees deliberately broken, the woman is believed to have suffered from kyphosis, an exaggerated rounding of the back.

The condition probably gave her a humped posture which may have scared the community. She was seen as a threat even after death.

The main, dismembered and decapitated, was also suspected to have had kyphosis.

The third skeleton, a male about 30-35 years of age, was buried with the head trapped between two stones. A hole into the spine showed an attempt to stake him to the ground.

“His bones look quite ‘normal’, without signs of diseases,” Socha said.